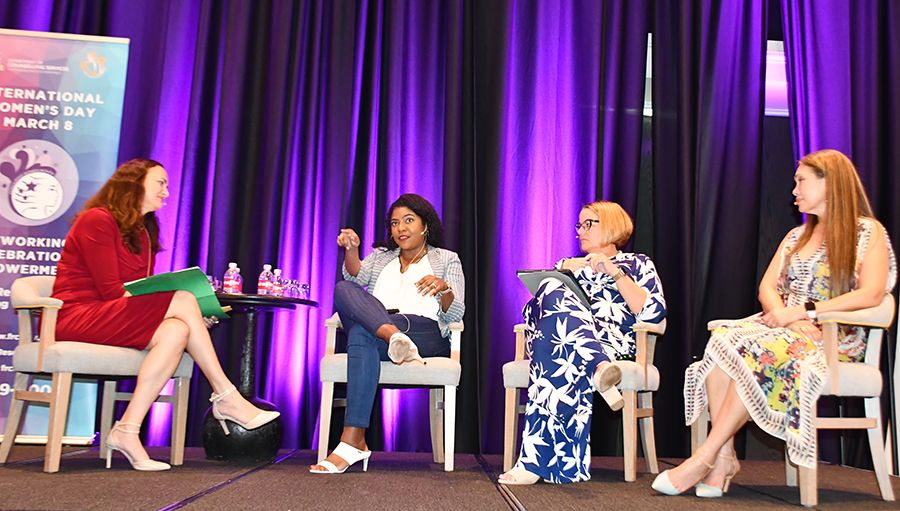 The International Women’s Day Brunch, hosted by the Family Resource Centre (FRC) during Honouring Women Month (HWM), attracted 150 guests to the sold-out event held at the Kimpton Seafire on Sunday, 7 March 2021.
The fundraiser, a blue-ribbon event in the annual HWM calendar, featured a distinguished three-person panel. Each panelist had come to prominence in a non-traditional career. The high-profile guests comprised of the first female President of Cayman National Bank, Janet Hislop; Magistrate Hon. Angelyn Hernandez; and 737 Boeing First Officer and first Caymanian female pilot of a Twin-Otter Giselah Ebanks.

Moderated by equality advocate, Cabinet-appointed member of the Gender Equality Tribunal, and former Women’s Resource Centre head Tammy Ebanks; panelists explained how they chose to challenge patriarchal stereotypes in the workplace. They also spoke about what preconceptions and misconceptions women face in the jobs market, and gave inspiring insights into how they had overcome obstacles.

As well as prioritising networking, panelists agreed that self-belief in your career direction, positive mentors and support structures were important; especially when building a career while raising a family. The panel discussion, which gave insights and inspired, ended with a standing ovation.

The event’s welcome address centered on the shared IWD and HWM theme: #ChoosetoChallenge. Given by Department of Counselling Services Director, Ms Judith Seymour, the remarks were a call-to-action on personal responsibility to create an inclusive world. “We all have the ability within our individual spheres of influence to challenge inequality, call out gender bias, and question stereotypes. We are after all, responsible for our own thoughts and actions every day,” she urged.

While welcoming the year-on-year increased presence of men at the IWD Brunch, Ms Seymour said that though progress was noticeable, humanity still had a way to go to achieving a fairer world.

“Violence against women increased by as much as 30% during the lockdowns in many parts of the world; women also bore the brunt of having to assume additional household responsibilities like home-schooling children while being expected to perform to full capacity in their jobs; and women were over-represented on the front-lines of fighting the coronavirus, accounting for up to 70% of health care and social workers,” she added.

The IWD Brunch was presided over by FRC Programme Facilitator, and Mistress of Ceremonies Ms Mehr Lamba. She spoke to the observance celebrating the achievements that women continue to make.

Guests enjoyed a performance by aerial acrobat Renee Razzani and tried out for Instagram-worthy images on the 360̊ photo booth.

All monies raised throughout HWM, including the brunch’s ticket sales and silent auction, will support the FRC’s Young Parents Programme for 13 to 25-year-olds.
#Coronavirus