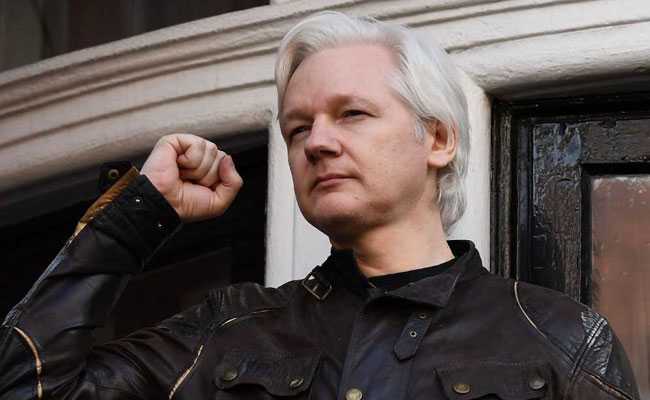 Stella Moris, who has two children with Assange, told a news conference that she last saw Julian Assange on Saturday in London's high-security Belmarsh Prison.
The fiancee of WikiLeaks founder Julian Assange said Monday he was looking thin and unwell as the US appeals against a UK ruling blocking his extradition.

Stella Moris, who has two children with Assange, told a news conference that she last saw Assange on Saturday in London's high-security Belmarsh Prison.

She said Assange was wearing a T-shirt exposing his arms for the first time in a long while and "I was quite taken aback how thin he was".

"He was looking very unwell."

The 50-year-old Australian was arrested in Britain in 2019 for jumping bail, after spending seven years inside the Ecuadorian embassy in London to evade extradition to Sweden to face allegations of sexual assault, which were later dropped.

The US government is seeking his extradition to face trial for publishing military secrets.

A UK judge in January blocked the US extradition request on the grounds that Assange was a suicide risk.

The US is seeking to overturn the British judge's ruling, arguing that other expert evidence indicated that Assange was not at risk of taking his own life.

Instead, it claimed the judge was "misled" by relying on evidence presented by Assange's psychiatric expert Michael Kopelman.

"We hope that this will be the end of it," Moris said of the two-day hearing starting Wednesday.

"The point was that Julian would not survive extradition, that was the conclusion of the judge."

Moris said that being in prison was "an ongoing struggle" for Assange and "a person can only take so much".

Rebecca Vincent, director of international programmes at Reporters Without Borders, said that US President Joe Biden had missed an opportunity "to distance himself from his predecessors" on the case, urging the US to drop it.

Kristinn Hrafnsson, editor-in-chief of WikiLeaks, said "it is unthinkable that the High Court will come to any conclusion other than to uphold" the original UK ruling.

Assange is wanted in Washington to face 18 charges relating to the 2010 release by WikiLeaks of 500,000 secret files detailing aspects of military campaigns in Afghanistan and Iraq.

If convicted in the United States, he faces a maximum sentence of 175 years in jail.
#Afghanistan  #Joe Biden