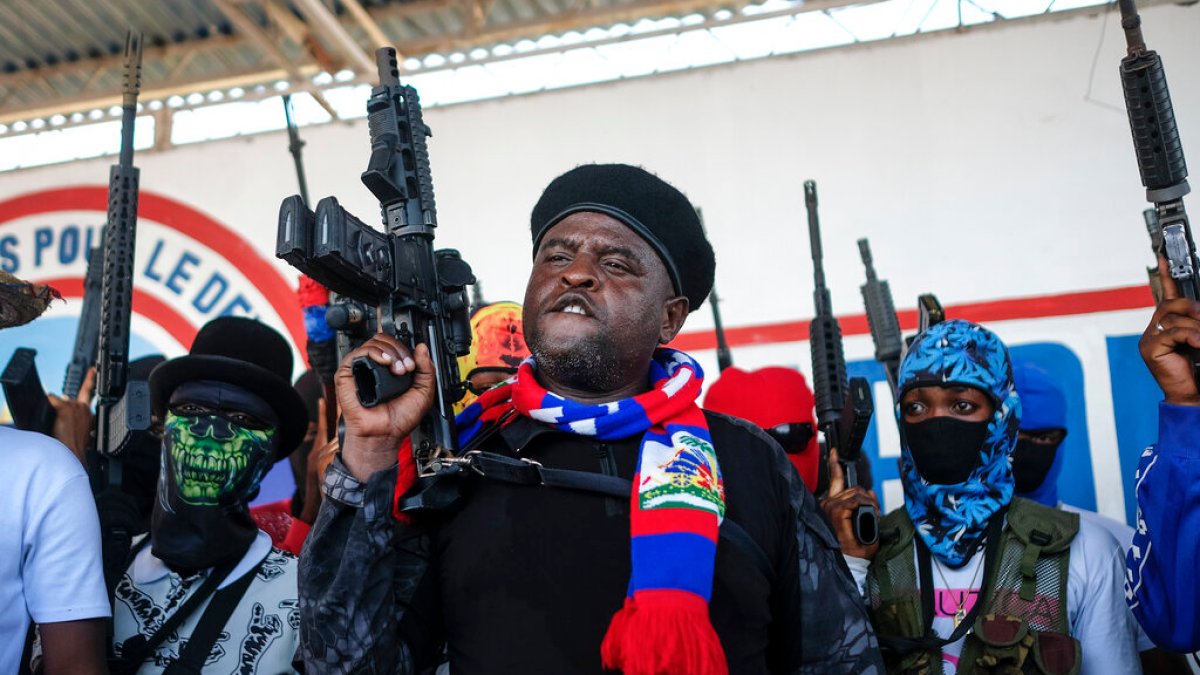 The UN Security Council has voted unanimously to impose sanctions on Haitian gang leader Jimmy “Barbecue” Cherizier, as the international community pushes to bring an end to surging violence in the crisis-hit Caribbean country.

The resolution on Friday established a mechanism to punish individuals and groups that “threaten the peace, security or stability of Haiti” – and Cherizier was the first person to be sanctioned under the scheme.

The leader of the so-called “G9 Family and Allies” gang alliance has become one of the faces of the multi-layered issues plaguing the country, which is suffering from political turmoil, a cholera outbreak and chronic insecurity.

A former officer of the Haitian National Police (HNP), Cherizier has been linked to various human rights violations and fatal attacks against civilians, according to multiple reports by media outlets, international observers and rights groups.

The United Nations also has blamed the powerful confederation of gangs that he leads for one of Haiti’s most pressing and recurring problems over the last months: severe fuel shortages.

The gang alliance is blocking a major fuel terminal in the capital, Port-au-Prince, which has forced hospitals to cut back on services and pushed the country towards a major humanitarian disaster.

“If Ariel Henry resigns at 8:00, then at 8:05, we remove all the barricades, so the trucks can come to the fuel depot and fill up, and then the crisis will stop,” Cherizier told Al Jazeera in an interview that aired in October 2021.

Henry came to power after the assassination of President Jovenel Moise in July of last year. While he enjoys Western support, Haitian civil rights groups have questioned his legitimacy, especially after Henry indefinitely postponed presidential and legislative elections last year.

Cherizier has presented himself as a revolutionary, fighting a system of inequality and the elites who control it. “We are fighting for another society – another Haiti that is not only for the 5 percent of the people who keep all the wealth, but a new Haiti where everyone can have food and clean water, so they can have a decent house to live, another Haiti where we don’t have to leave the country,” he said in the same interview last year.

But the gang leader is accused of a host of abuses against Haitians, dating back to his days with the security forces.

The UN and the US have said Cherizier was an HNP officer when he was involved in a 2018 massacre in the Port-au-Prince neighbourhood of La Saline that killed dozens of people.

The attack was coordinated between Haitian officials and local gangs to “repress political dissent” in the capital, the US Department of the Treasury said in a 2020 statement announcing sanctions against Cherizier.

“During this attack, at least 71 people were killed, over 400 houses were destroyed, and at least seven women were raped by armed gangs,” a US government report said in 2021. “Throughout 2018 and 2019, Cherizier led armed groups in coordinated, brutal attacks in Port-au-Prince neighborhoods.”

According to local news reports, Cherizier was fired from the police late in 2018, and months later, an arrest warrant was issued against him on accusations he participated in the execution of civilians during a police raid in the Grand Ravine area of Port-au-Prince in 2017.

Cherizier has denied the accusations. “I’m not a gangster. I never will be a gangster,” he told Al Jazeera last year. “It’s the system I’m fighting against today. The system has a lot of money; they own the media. Now they try to make me look like a gangster.”

Amid the current turmoil, The Associated Press reported this month that Cherizier had “proposed his own plan for Haiti’s future — even seeking seats in the Cabinet — while demanding that the [Henry] administration … grant amnesty and void arrest warrants against the group’s members”.

In an interview with the news agency in 2019, the gang leader said he was born close to La Saline as the youngest of eight children, and his father died when he was five.

Cherizier also told The AP at that time about the origins of his alias, “Barbecue”, denying that it was about burning people. He said he acquired the name as a child when his mother was a fried chicken street vendor.

During the past year, Cherizier has spoken regularly to reporters. During his conversation with Al Jazeera, he walked through the desolate streets of La Saline and had friendly interactions with residents. He often has a large rifle strapped around his body during public appearances.

But the image that Cherizier has tried to project as a leader on the side of the poor stands in stark contrast with some of the accusations levelled against him and the gangs he leads.

Haiti’s National Network for the Defense of Human Rights released a report (PDF) in August documenting “mass and repeated rape perpetrated against women and girls” during violence between Cherizier’s followers and rival gangs in Cite Soleil, an impoverished area of Port-au-Prince.

An earlier report by the group last year also accused Cherizier of ordering killings and the burning of homes in various attacks in the country.

That was echoed by Friday’s UN Security Council resolution, which stated that “throughout 2018 and 2019, Cherizier led armed groups in coordinated, brutal attacks in Port-au-Prince neighbourhoods.

“In May 2020, Cherizier led armed gangs in a five-day attack in multiple Port-au-Prince neighborhoods in which civilians were killed and houses were set on fire,” the resolution said.

It added that his actions, including the blocking of the fuel terminal, “have directly contributed to the economic paralysis and humanitarian crisis in Haiti“. The UN sanctions against Cherizier include an assets freeze and a global travel ban.