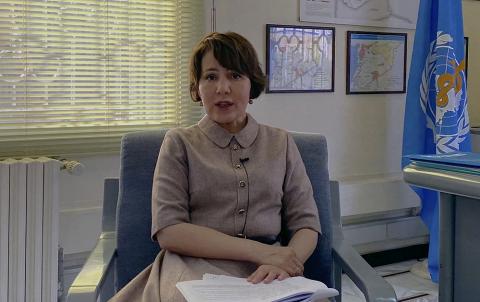 WHO Head in Middle East ‘Disturbed’ by Abuse Report

The head of the World Health Organization’s Eastern Mediterranean region told staff in an internal email that he is “very disturbed” by allegations reported by the Associated Press last week that the UN health agency’s Syria director misspent millions, abused staff and violated the organization’s own COVID-19 protocols as the pandemic swept across the war-torn country.
In a message sent to all staff in the Middle East on Friday, Dr. Ahmed Salim Al-Mandhari said “the allegations negatively impact the people of Syria, whom we strive to serve.”

This week, two members of WHO’s ethics department in Geneva, including its director, are visiting the agency’s Eastern Mediterranean headquarters in Cairo, which oversees Syria.

“The purpose of the visit is to advance awareness through various sessions, on the ethical conduct, principles, values and expectations,” staff were told in an internal email sent on behalf of WHO’s director of business operations in Cairo.

The AP on Thursday published an investigation based on more than 100 confidential UN emails, documents and other materials showing that WHO staffers told investigators the agency’s Syria representative, Dr. Akjemal Magtymova, engaged in abusive behavior, pressured WHO staff to sign contracts with high-ranking Syrian government politicians and plied government officials with gifts. Magtymova declined to comment and called the allegations “defamatory.”

The misconduct claims from more than a dozen WHO staffers have triggered one of the biggest internal probes in years, involving more than 20 investigators.

“As the investigation continues, we have already taken mitigating action,” Al-Mandhari said in his message to staff, referring to the decision to name an acting Syria representative in May. “We also proactively informed our donor partners of the ongoing investigation.” Still, Magtymova remains in her position and continues to draw a director-level salary.

Karam Shaar, a Syria expert at the Washington-based Middle East Institute, said that although there have been rumors of UN corruption in Syria for years, the AP report showed that “they are more extreme than we ever thought.”

“What reportedly happened at the WHO Syria office is particularly egregious because at this point in time, Syrians have never been more vulnerable,” Shaar said. “It’s exactly at this time that WHO should be responsible, yet we have never heard as serious allegations from any other UN agency. The charges against WHO are by far the worst.”

Syria’s health system has been devastated by more than a decade of war, and for years the country has relied almost exclusively on humanitarian aid. Nearly 90% of the population lives in poverty and more than 7 million people have been displaced by the conflict.

Adam Kamradt-Scott, a professor specializing in global health at the European University Institute in Italy, said that because WHO’s funds come from taxpayers, the agency must prove its spending is warranted.

Financial documents obtained by the AP showed, among other examples, that WHO’s Magtymova once spent more than $11,000 of WHO funds on a party mostly to honor her own achievements during COVID-19. Numerous WHO staffers also alleged that Magtymova used WHO funds to buy inappropriate gifts for Syrian government officials, including gold coins and expensive cars.

“If it were any other context than the UN and there was a misappropriation of funds, you would likely see employees being held criminally responsible,” Kamradt-Scott said. “But we still have a situation where WHO staff are essentially investigating other WHO staff, which is not exactly the best approach.”

In his email to WHO staffers in the Eastern Mediterranean, regional director Al-Mandhari encouraged officials to report suspected misconduct through WHO’s own “integrity hotline.”

Eight WHO personnel who complained internally about Magtymova’s reported misconduct as early as last year told the AP their concerns have yet to be addressed.

One former Syrian staffer wrote to the WHO chief earlier this month, pleading for help after earlier emails went unanswered.

“I would like to inquire about the next step regarding the damages due to stress caused by workplace and the potential loss of employment as a result of harassment,” wrote the former employee, who asked for $35,000 in compensation. “Your support and feedback in this regard is essential to save the image of WHO in my beloved country, Syria.”

WHO chief Tedros Adhanom Ghebreyesus has not responded, despite insisting in the past that WHO has “zero tolerance” for misconduct.

According to WHO figures, there are more than 250 ongoing internal investigations involving abusive behavior or sexual exploitation and harassment.

Sheba Crocker, the US ambassador to the UN in Geneva, said the US was in contact with WHO and was closely following its internal probe in Syria, where it is a major UN donor.

“Responsible leadership as well as stewardship of member state resources must always be a requirement for leadership positions in international organizations,” Crocker said in a statement.

Natasha Hall, a senior fellow in the Middle East Program at Washington’s Center for Strategic and International Studies, said there were structural failures that consistently allowed for UN abuses to occur.

“The knee-jerk reaction in the UN is to just cover up these violations and hope they go away,” she said, comparing the UN response in Syria to the Catholic Church’s handling of the sexual abuse of children. “Unless donor governments collectively push back on this, it’s likely we will keep hearing about these kinds of abuses.”
#COVID-19  #Covid