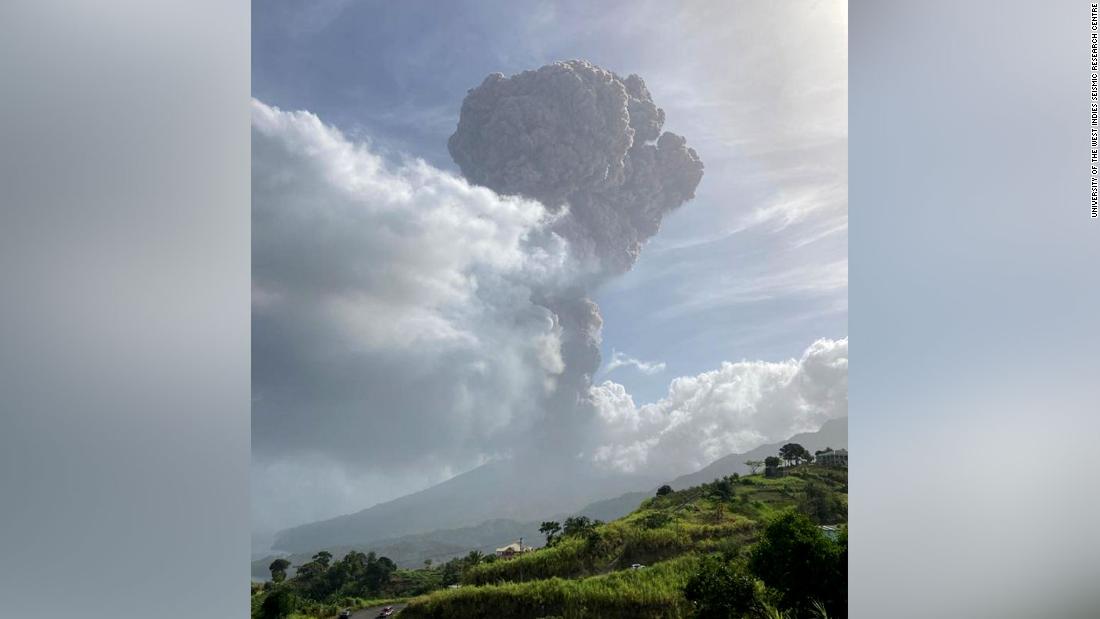 Volcano erupts for a second time on Caribbean island of St. Vincent

The La Soufrière volcano on the Caribbean island of St. Vincent erupted for a second time Friday, according to the country's National Emergency Management Organization, NEMO.

The second explosive eruption was smaller than the first one, which occurred earlier on Friday, according to NEMO's Twitter account.

"Another explosion observed. The vertical ash column estimated to have gone approximately 4 kilometers (2.5 miles) into the atmosphere. We continue to monitor and update," the UWI Seismic Research Centre, which is working with local authorities, said on its official Facebook page.

"It's over an hour now," she told CNN by phone from nearby. "Ash is going into the air."

There have been no reports of injuries or property damage so far, according to James.

Scientists and some residents who did not evacuate remain near the volcano, she said.

Authorities have said it is likely that explosive eruptions could continue to occur "for days and possibly weeks."

The areas closest to the volcano will be affected by pyroclastic flows and surges, authorities said. Teams are collecting data to understand the pattern of eruption.

La Soufrière is located on the largest island of the St. Vincent and the Grenadines chain.

Prime Minister Gonsalves on Thursday declared a disaster alert prompted by a change in the volcano's eruptive activity. The island was placed on red alert, meaning an eruption was "imminent now," NEMO said.

Earlier Friday, James told CNN the first eruption sounded like a "large jet engine," and that there was a "consistent flow of smoke" from the ash plume.

Boats and some vehicles picked up last-minute evacuees from the area shortly after the explosion, she said. James, too, evacuated from the area but is heading back to see if there is damage.

She said phone lines were jammed in the area because so many people are calling to try to get news and check on anyone that may have stayed behind.

Kenton Chance, a freelance journalist, told CNN that he was about five miles away from the volcano in the town of Rosehall on St. Vincent.

"Normally, you would have a very commanding view of the volcano," he said. "But because of the amount of ash in the air, you can't see it." Ash was still falling but in decreasing amounts, he said.

Chance heard rumbling from the mountain when he arrived.

Evacuation orders were put into place in about a dozen districts of St. Vincent, affecting roughly 6,000 to 7,000 people, a spokesperson for the University of the West Indies Seismic Research Centre, or UWI-SRC, told CNN.

While en route to Rosehall, Chance said he witnessed a number of people stopped on the side of the road, which he believes were evacuees.