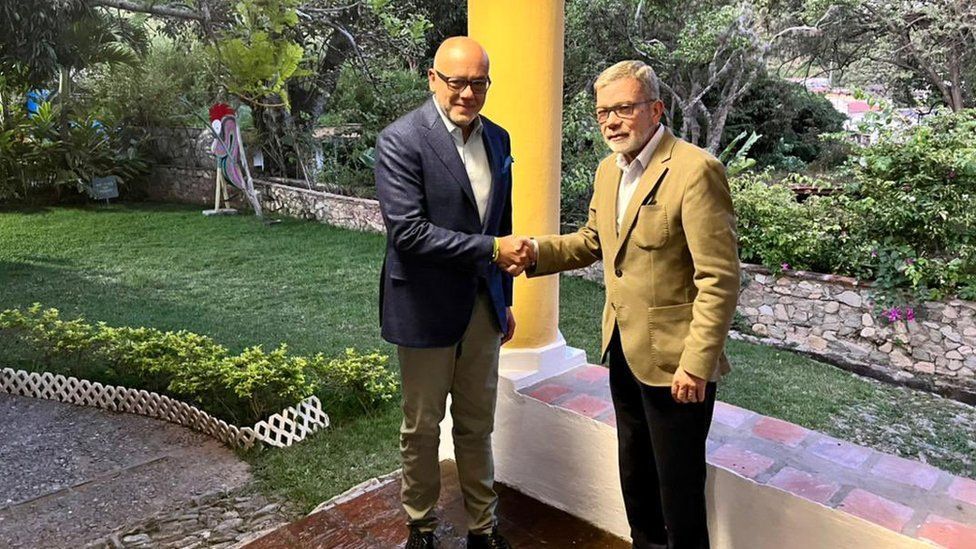 Venezuela government and opposition to renew talks amid humanitarian crisis

Venezuela's government and opposition say they are ready to restart talks in Mexico aimed at resolving the country's political crisis.
Negotiations collapsed in October after an ally of President Nicolas Maduro was extradited to the US by Cape Verde.

But the opposition said discussions took place on restarting talks after a photo was released showing delegates of the two sides shaking hands.

It comes as the US agreed to ease some sanctions against Caracas on Tuesday.

US officials said the move, which was taken in close collaboration with opposition leaders, was designed to entice Mr Maduro back to the negotiating table and would include easing sanctions against some Venezuelan officials.

Chevron, the last major American oil company with significant operations in the country, will also be permitted to engage in discussions about future activities with Mr Maduro's government.

Opposition delegate Gerardo Blyde and government representative Jorge Rodríguez posted a photo to Twitter on Tuesday evening showing the two men shaking hands. They captioned the photo: "In a work meeting for future plans. In the rescue of the spirit of Mexico".

The talks are aimed at resolving Venezuela's long-running political and humanitarian crisis, which has seen some six million people flee the country.

But Mr Maduro scrapped the last round in October after Alex Saab, a Colombian businessman close to the Venezuelan government, was extradited to the US on money laundering charges.

The opposition's main demand is a free and fair presidential election, which is scheduled to take place in 2024.

Following his election in 2013 to succeed Hugo Chavez, Mr Maduro has grown increasingly authoritarian. His crackdown on opposition activists ultimately led to the US imposing sanctions on his regime and recognising opposition leader Juan Guaidó as interim president after a contested election in 2019.

In a statement posted to Twitter after the meeting, Mr Guaidó said that an "agreement that provides solutions to the tragedy and addresses the complex humanitarian emergency is urgent for Venezuela".

He urged Mr Maduro's government to allow "conditions for free and fair elections, with guarantees for all sectors" and said the opposition's sole objective in talks is "to save Venezuela".

Earlier on Tuesday, Vice-President Delcy Rodriguez said in a post on Twitter that her government hopes the resumption of talks will see Washington lift what she called "the illegal sanctions that affect our people".