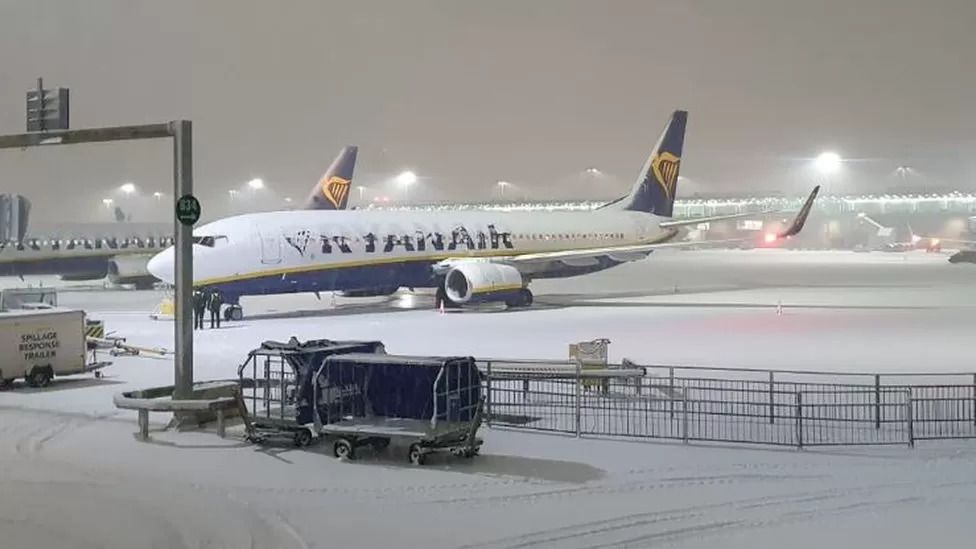 All flights have been suspended at Stansted Airport after it was forced to close its runway due to bad weather.

A yellow weather warning remains place for Scotland, London and south-west England until Monday morning, with the disruption set to continue.

Trains have also been delayed and drivers warned to take care after several motorway accidents.

Stansted said on Sunday night its only runway was closed to allow for snow clearance due to weather conditions and all flights were suspended.

"Delays to flights were experienced earlier due to de-icing of aircraft which is a ground handler's responsibility and safety of aircraft and passengers is paramount," a spokesman added.

"Passengers are advised to check with their airline for current status of their flights." 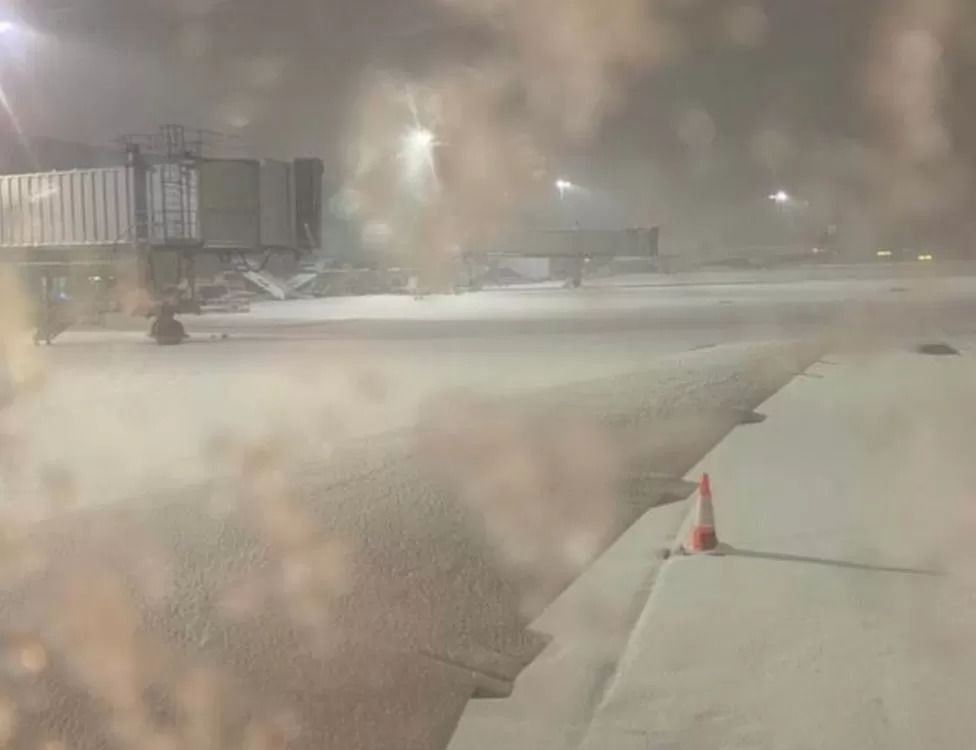 The view from James Love's plane
James Love told the BBC he was stuck on a Loganair plane at Stansted for several hours which was unable to take off.

"The captain wanted to de-ice the wing," he said. "But by the time the ground crew had come over to do that and the plane was ready, the runway shut and we had to return to stand."

However, he said the crew had been great and made the "whole thing a lot better, or at least as good as can be for this kind of situation".

More than 50 flights were cancelled at Heathrow on Sunday, after freezing fog resulted in air traffic control restrictions on the number of aircraft that could land and depart per hour .

The airport said it was keeping passengers safe and trying to get them to their destinations as quickly as possible.

"We encourage passengers to check their flight status with their airline for the latest information," a spokeswoman said.

British Airways, the Heathrow's biggest airline, said it had apologised to customers and was refunding or rebooking anyone whose flight had been cancelled and providing refreshment and hotel vouchers where needed.

It said Heathrow was going to restrict flights in and out of the airport again on Monday, meaning more disruption.

Gatwick Airport temporarily closed one of its runways at 17:55 GMT on Sunday due to un-forecast snow and reopened it at 20:00 when conditions were safer.

A number of flights were delayed or cancelled, while 28 others were also diverted to other airports during the closure.

"Every effort is being made to get these flights back to Gatwick tonight," a spokesman said.

"Freezing weather conditions are expected to continue this evening and may cause further disruption at the airport.

"Passengers travelling this evening and tomorrow are advised to check their flight status with the airline - and also local travel conditions - before departing for the airport."

A spokesperson for London Luton Airport warned that there could be disruption to flights and also advised passengers to allow extra time when travelling to the airport.

On Saturday, Manchester Airport closed both runways due to "heavy snowfall", with dozens of flights affected.

Some passengers complained on Sunday about a lack of information from airlines on the cancellations.

Others said they had been unable to get off planes due to the icy conditions.

Stansted and Gatwick were unable to say whether they would cancel flights on Monday.

Heavy snowfall caused a series of traffic collisions on Sunday, as many drivers were faced with treacherous conditions.

*  In Shropshire, the M54 between junctions 3 and 2 was shut, while major congestion was also reported on the M5 slip road to the M6.


*  The southbound M5 in Gloucestershire was shut after a multi-vehicle crash between junctions 11A and 12 near Quedgeley, Highways England said.


*  Drivers in north-west England were also being advised to take care following accidents on other motorways including the M58, M62, M61.


*  National Highways has asked road users in the South East not to travel on Sunday evening due to heavy snow.

The AA advised motorists to adjust their driving to the freezing conditions on Monday morning.

"On a frosty morning, hazards like black ice can prove lethal if you don't adjust your speed and driving style in colder weather," said Sean Sidley of the AA.

He urged drivers to leave plenty of space behind other vehicles; allow extra time for journeys; pack winter essentials in the car such as warm, waterproof layers; and to take heed of warning lights in vehicles.

Trains across the West Midlands were also hit by delays.

The UK's Met Office has said its severe weather warning will be in place until 09:00 on Monday morning, warning of possible travel delays on roads, along with delayed or cancelled rail and air travel.

Temperatures could drop as low as -15C (5F) in northeast Scotland overnight.

But the Met Office ended its weather warning for Northern Ireland, despite the cold weather leading to some sporting fixtures being cancelled.

It warned of the risks posed around open water following the rescue of four children now in critical condition after falling through ice on a lake near Birmingham.