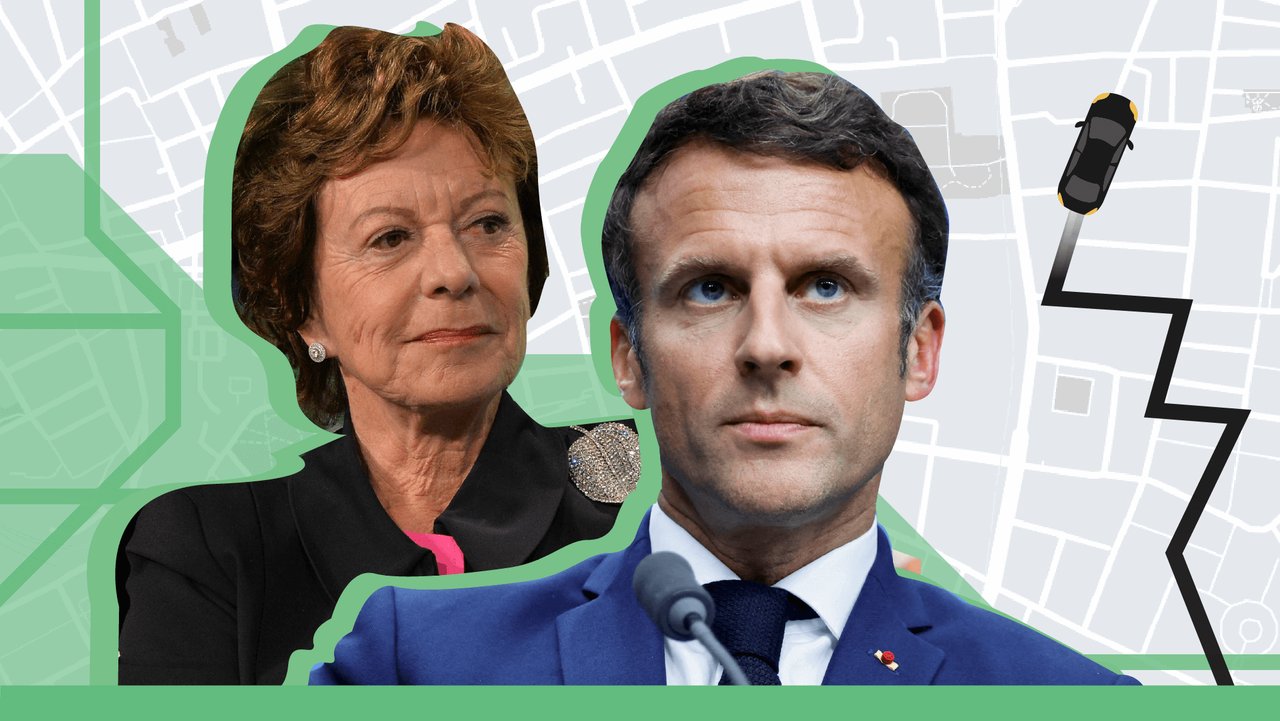 Thousands of leaked files have exposed how Uber courted top politicians, and how far it went to avoid justice.

They detail the extensive help Uber got from leaders such as Emmanuel Macron and ex-EU commissioner Neelie Kroes.

They also show how the taxi firm's former boss personally ordered the use of a "kill switch" to prevent raiding police from accessing computers.

Uber says its "past behaviour wasn't in line with present values" and it is a "different company" today.

They were leaked to the Guardian, and shared with the International Consortium of Investigative Journalists and a number of media organisations including BBC Panorama. They reveal, for the first time, how a $90m-a-year lobbying and public relations effort recruited friendly politicians to help in its campaign to disrupt Europe's taxi industry.

While French taxi drivers staged sometimes violent protests in the streets against Uber, Mr Macron - now president - was on first name terms with Uber's controversial boss Travis Kalanick, and told him he would reform laws in the firm's favour.

Uber's ruthless business methods were widely known, but for the first time the files give a unique inside view of the lengths it went to in achieving its goals.

They show how ex-EU digital commissioner Neelie Kroes, one of Brussels' top officials, was in talks to join Uber before her term ended - and then secretly lobbied for the firm, in potential breach of EU ethics rules.

At the time, Uber was not just one of the world's fastest-growing companies - it was one of the most controversial, dogged by court cases, allegations of sexual harassment, and data breach scandals.

Eventually shareholders had enough, and Travis Kalanick was forced out in 2017.

Uber says his replacement, Dara Khosrowshahi, was "tasked with transforming every aspect of how Uber operates" and has "installed the rigorous controls and compliance necessary to operate as a public company".

Paris was the scene of Uber's first European launch, and it met stiff resistance from the taxi industry, culminating in violent protests in the streets.

In August 2014, an ambitious former banker named Emmanuel Macron had just been appointed minister for the economy. He saw Uber as a source of growth and badly needed new jobs, and was keen to help.

That October, he held a meeting with Mr Kalanick and other executives and lobbyists, which marked the start of a long - but little-publicised - stint as a champion of the controversial firm's interests within government.

Uber lobbyist Mark MacGann described the meeting as "spectacular. Like I've never seen," the files show. "We will dance soon," he added. 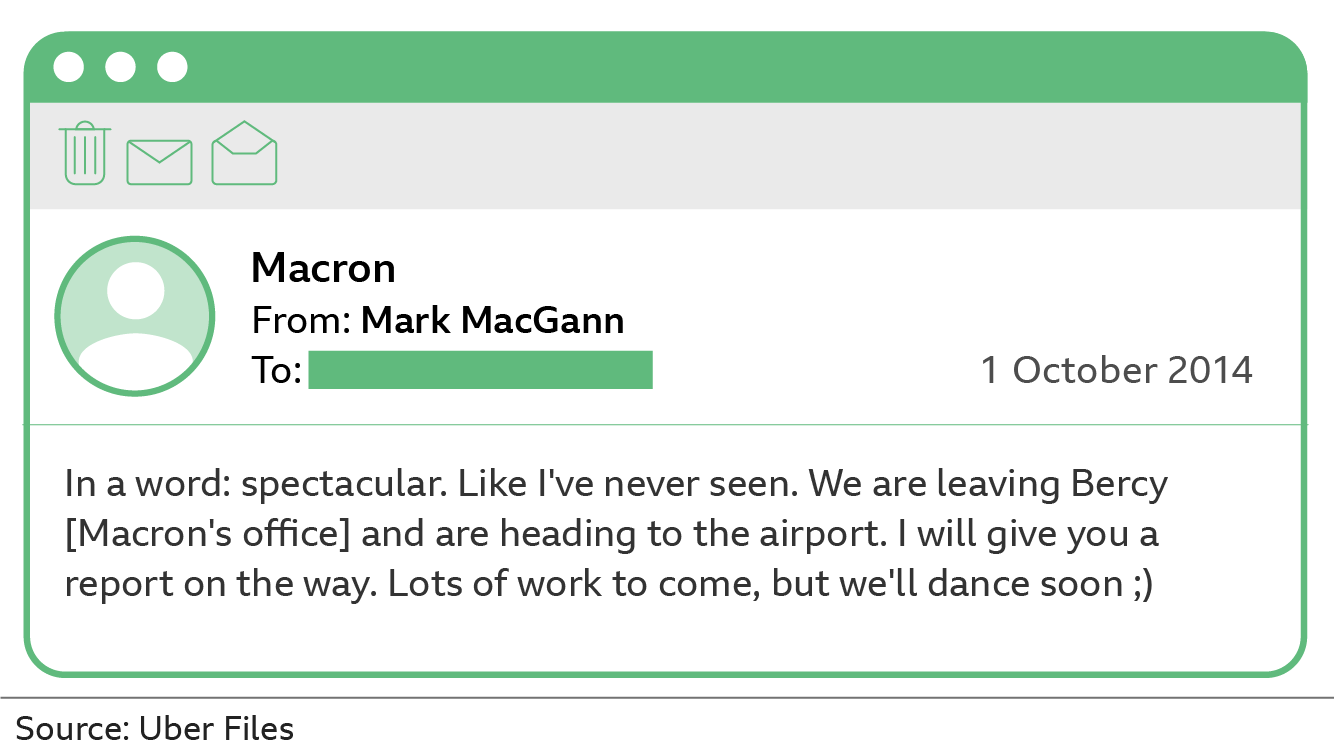 "Emmanuel" and "Travis" were soon on first name terms, and met at least four times, the files show - in Paris, and at the World Economic Forum conference in Davos, Switzerland. Only the Davos meeting has been previously reported.

At one point Uber wrote to Mr Macron saying it was "extremely grateful". "The openness and welcome we receive is unusual in government-industry relations."

French taxi drivers were particularly enraged by the 2014 launch of UberPop - a service which allowed unlicensed drivers to offer rides, at much lower prices.

Courts and parliament banned it, but Uber kept the service running as it challenged the law.

Mr Macron didn't think there was a future for UberPop, but he agreed to work with the company to rewrite France's laws governing its other services.

"Uber will provide an outline for a regulatory framework for ridesharing. We will connect our respective teams to start working on a feasible proposal that could become the formal framework in France," an email from Travis Kalanick to Mr Macron reads.

On 25 June 2015, the protests became violent, and a week later Mr Macron texted Mr Kalanick with an apparent offer of help. 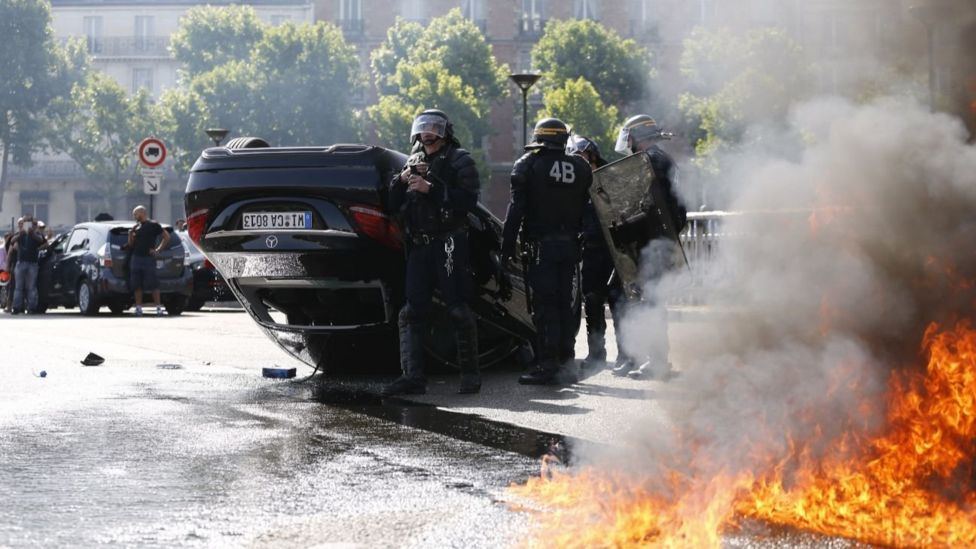 "[I] will gather everybody next week to prepare the reform and correct the law."

The same day, Uber announced the suspension of UberPop in France.

The extent of the now-president of France's relationship with the controversial global firm that was operating in violation of French law has not been revealed until now.

A spokesperson for Mr Macron said in an email: "His functions naturally led him to meet and interact with many companies engaged in the sharp shift which came out during those years in the service sector, which had to be facilitated by unlocking administrative and regulatory hurdles."

Uber said the "suspension of UberPop was in no way followed by more favourable regulations," and a new law that came into force in 2018 resulted in France adopting "stricter regulations" that were "in no way beneficial to Uber".

The files also reveal how Uber's relationship with one of Europe's top officials, European Commission vice-president Neelie Kroes, began significantly earlier and ran deeper than previously was known, putting her in an apparent breach of rules governing commissioners' conduct.

They reveal she was in talks to join Uber's advisory board before she even left her last European post in November 2014.

EU rules say commissioners have to respect a "cooling-off" period, then 18 months, during which new jobs require the approval of the commission.

As a commissioner, Ms Kroes oversaw digital and competition policy, and was a high-profile scourge of big tech, playing a leading role in hitting Microsoft and Intel with massive fines.

But of all the companies she could have worked for after leaving, Uber was a particularly controversial choice.

In her home country, the Netherlands, the UberPop ridesharing service had also brought legal and political trouble.

Uber drivers were arrested in October 2014, and that December a judge in the Hague banned UberPop, threatening fines up to 100,000 euros. In March 2015, Uber's Amsterdam office was raided by Dutch police.

Emails say that Ms Kroes called ministers and other members of the government to persuade them to back down during the raid.During another raid a week later, Ms Kroes again contacted a Dutch minister the Uber Files show, and, in the words of an email, "harassed" the head of the Dutch civil service.

An internal email advised staff not to discuss her informal relationship externally: "Her reputation and our ability to negotiate solutions in the Netherlands and elsewhere would suffer from any casual banter inside or outside the office." 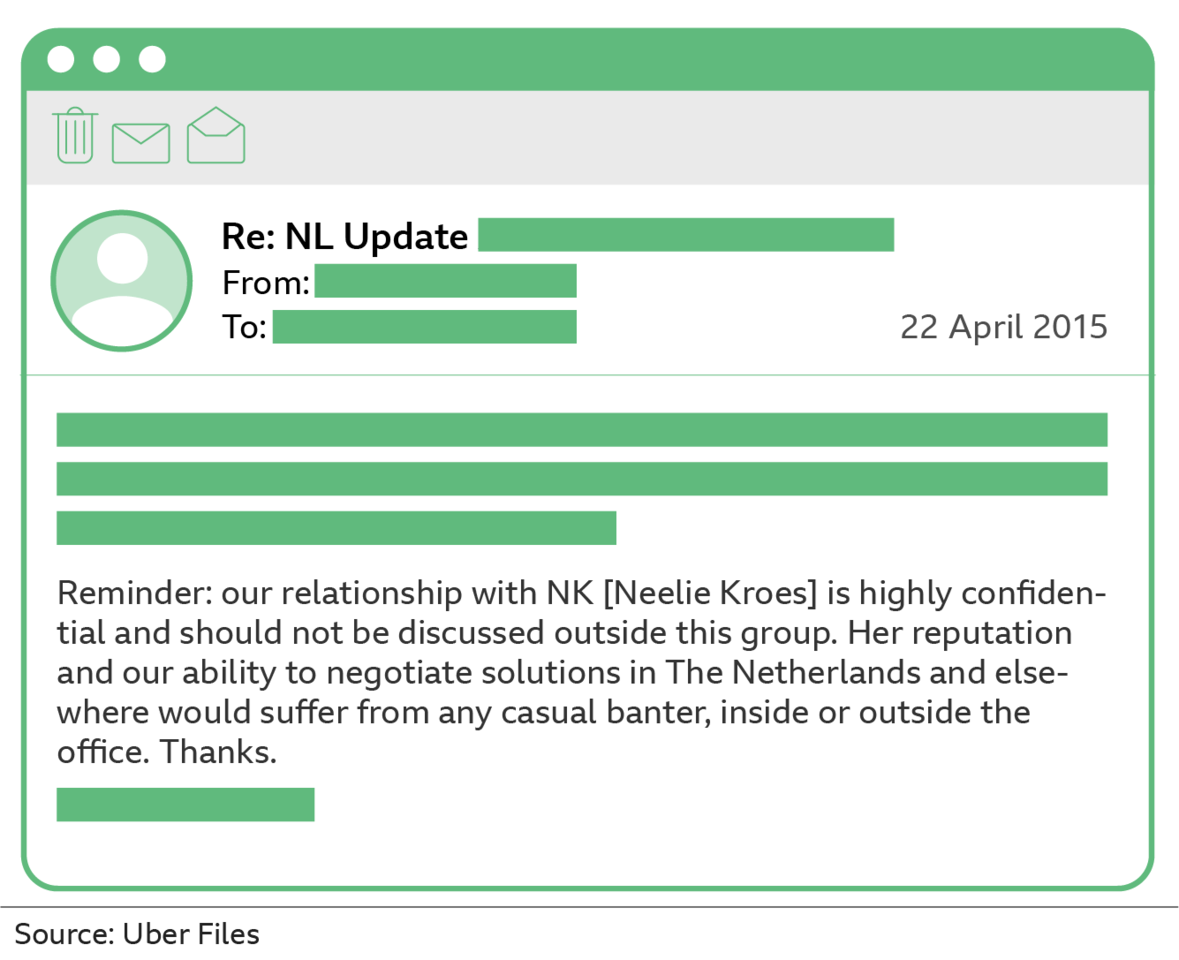 The files show that the company wanted Ms Kroes to pass messages on to the office of the Dutch Prime Minister, Mark Rutte.

In October 2015, an email reads: "We'll get backchannel going with Neelie and the PM's Chief of Staff, to extract maximum advantage through 'giving' them the notion of a 'victory'."

She wrote to the commission's Ad Hoc Ethical Committee requesting permission to join Uber's advisory board before the 18 months were up, and appealed to commission president Jean-Claude Juncker.

That permission was denied, but documents show Ms Kroes continued to help the company informally until her appointment was announced, shortly after the cooling-off period had ended.

This underlines that Ms Kroes was in a "clear breach" of the rules, says Alberto Alemanno, Jean Monnet professor of European Union law at HEC Paris. 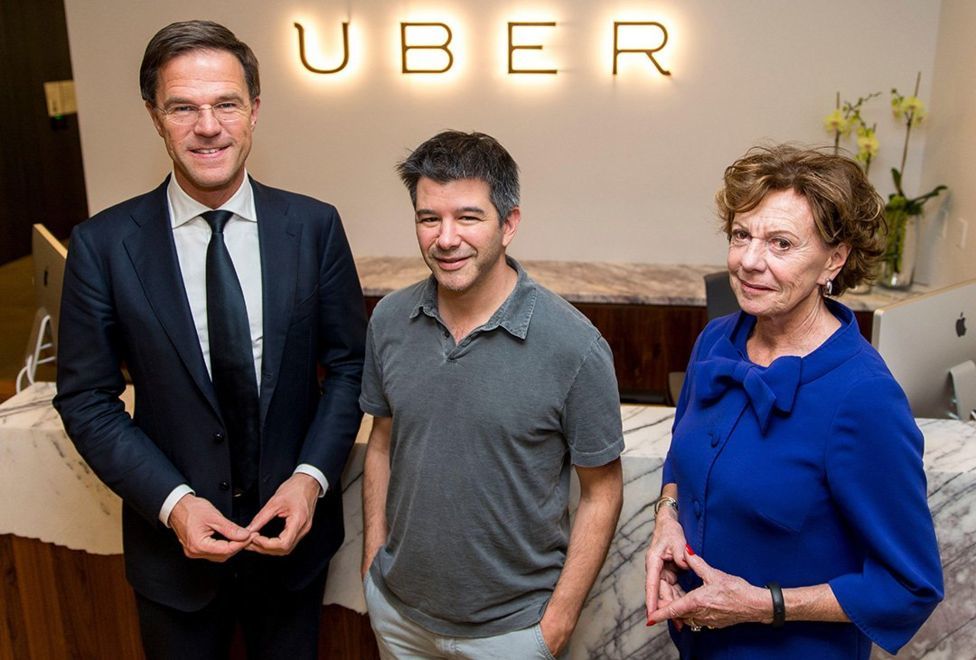 Dutch PM Mark Rutte, Uber's then CEO Travis Kalanick and Neelie Kroes on a visit to Silicon Valley in 2016

"You're proving the fact that you're doing something you are not allowed to do," he told BBC Panorama. "Because if she didn't necessarily ask for permission, you might still argue there was a grey area, there was a grey zone. But now it's no longer there."

Looking at all the disclosures about Ms Kroes' relationship with Uber, he said: "It makes me feel that our system is probably not fit for purpose because this situation should have been prevented."

Ms Kroes denies that she had any "formal or informal role at Uber" before May 2016, when the cooling-off period expired.

She said as an EU commissioner she interacted with numerous technology companies, "always driven by what I believe would benefit the public interest".

During the cooling off period, the Dutch government appointed her special envoy for start-ups, which involved interactions with a "wide array of business, government and non-governmental entities" with the aim of promoting a "business-friendly and welcoming ecosystem in the Netherlands", she said.

A spokesperson for the Dutch ministry of economic affairs says that "Uber was not considered a start-up in 2015".

Uber says Ms Kroes left the advisory board in 2018, and says it has since introduced new guidelines "strengthening oversight" of "lobbying and external engagements with policymakers" in Europe.

If the police came knocking, Uber had a second line of defence - the "kill switch", which made it impossible for visiting law enforcement to access the company's computers.

This would restrict officers' access to sensitive company data, such as lists of drivers, which the company believed would harm its growth.

The files confirm earlier news reports about the kill switch, and reveal that Mr Kalanick himself activated the system at least once.

"Please hit the kill switch ASAP. Access must be shut down in AMS [Amsterdam]," an email from his account says. 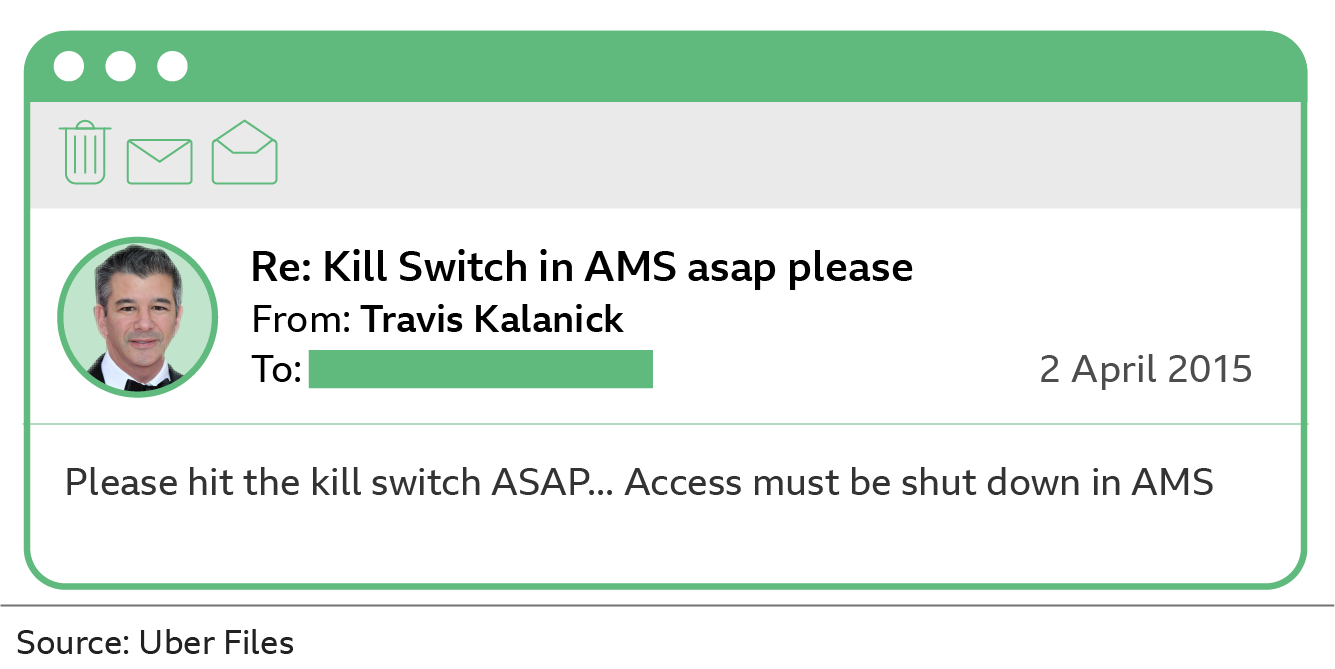 The kill switch was also used in Canada, Belgium, India, Romania and Hungary, and at least three times in France.

Uber says it has had no "'kill switch' designed to thwart regulatory inquiries anywhere in the world" since the new chief executive took over in 2017.

A spokesperson for Mr Kalanick said he never authorised any actions or programmes that would obstruct justice in any country, and any accusation he did is completely false. He said Uber "used tools that protect intellectual property and the privacy of their customers" and that "these fail-safe protocols do not delete any data or information, and were approved by Uber's legal and regulatory departments".

The Uber Files is a leak of 124,000 records including emails and texts exposing conversations and meetings between Uber executives and public officials as the technology-driven taxi firm sought to expand its business. The files were leaked to the Guardian which shared them with the International Consortium of Investigative Journalists in Washington DC and media partners in 29 countries, including the BBC's Panorama.