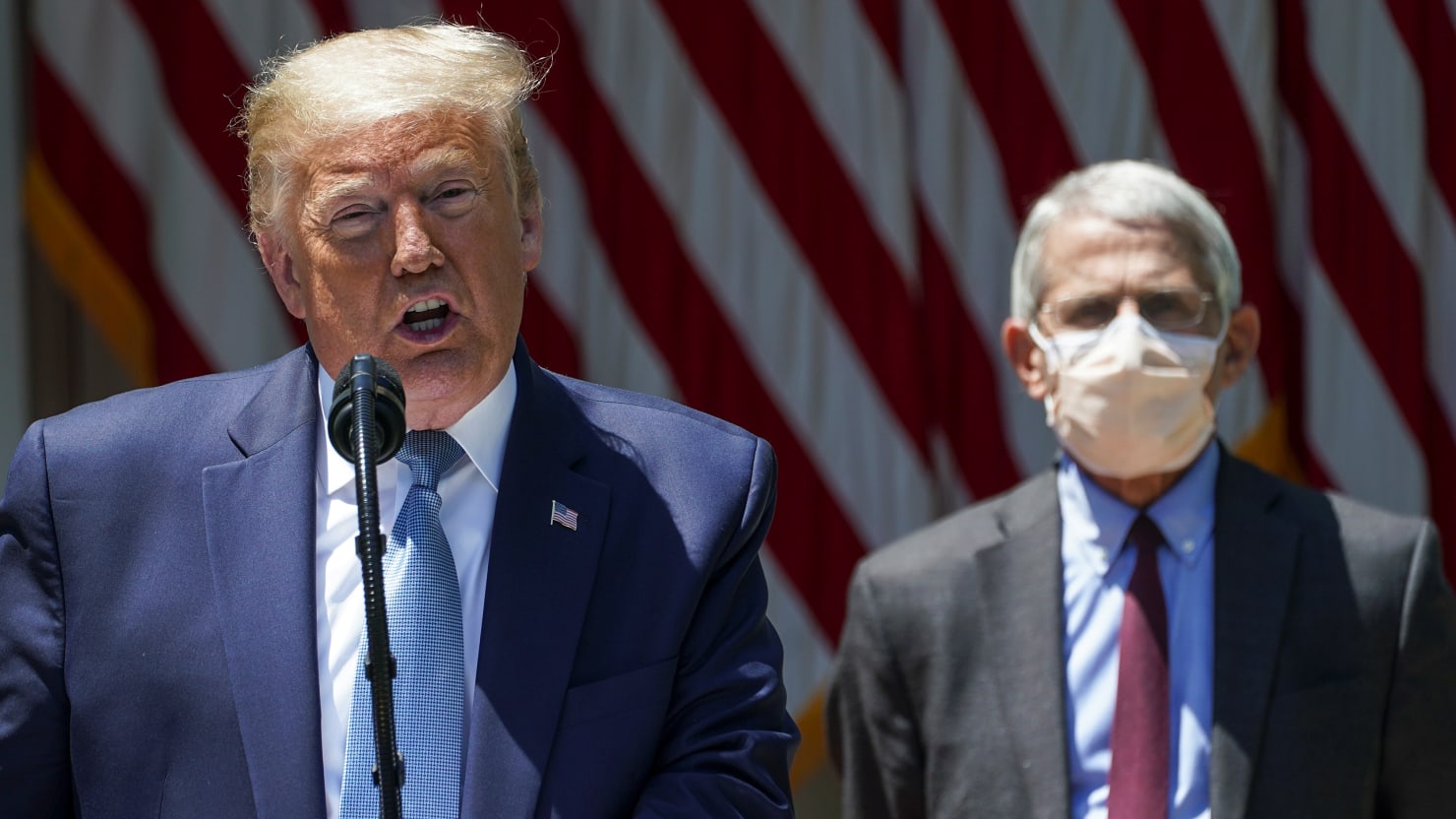 President Donald Trump on Monday unloaded on Dr. Anthony Fauci, the nation’s top infectious-disease expert, complaining that those working to curtail the coronavirus pandemic that has killed almost 220,000 Americans are all “idiots.”

The president then called Fauci “a disaster” and lamented that he would receive lots of negative press if he fired the public-health expert because he is a “nice guy.”

Hours later, Trump renewed his attacks on Fauci, who has been the director of the National Institute of Allergy and Infectious Diseases since 1984 and is also a member of the White House Coronavirus Task Force. In a series of tweets, Trump insisted all he asked of Fauci is to “make better decisions.”

Upon arriving in Arizona on Monday afternoon, Trump slammed Fauci a third time, saying that the doctor is a “very nice man” but “sometimes he says things that are a little bit off.”

“He’s been there for about 350 years, I don’t want to hurt him,” he added, before accusing Fauci of making some “bad calls.”

“Dr. Fauci is a very nice man…sometimes he says things that are a little bit off,” Trump says on the tarmac in Arizona, adding: “He’s been there for about 350 years, I don’t want to hurt him.”

Tensions between the president and Fauci and other public-health officials and government scientists working to mitigate the highly contagious virus have been building for months. The divide has been made worse in recent weeks after a Trump campaign ad included footage and a misleading audio clip from Fauci to buttress the president’s widely panned leadership on the virus that has infected more than 8 million Americans. Fauci has called out the president for the spot, telling The Daily Beast it was “in effect, harassing me.”

“Every time he goes on television there’s always a bomb, but there’s a bigger bomb if you fire him. This guy’s a disaster,” Trump said on the campaign call, according to multiple reporters who were listening in.

In the same interview with The Daily Beast, Fauci stressed there was “not a chance” that he would quit his position.

Over the last month—and since his own COVID-19 diagnosis—Trump has been touring America and claiming the nation is “rounding the corner” on COVID-19, even though infections are now surging with daily averages of more than 50,000 a day. Experts believe the spread of the virus will only get worse as winter looms.

However, that looming health threat did nothing to slow down Trump on Monday in his campaign phone call.

“Fauci is a disaster. If I listened to him, we’d have 500,000 deaths,” he said, before later adding—baselessly—that it would be 700,000 or 800,000, after a weekend of rallies full of crowds that flouted Centers for Disease Control and Prevention guidelines of social distancing and face-mask use. There is no evidence to suggest Fauci, or any other U.S. public-health official associated with the COVID-19 response, would be responsible for the hundreds of thousands of American deaths if in charge.

“If there’s a reporter on, you can have it just the way I said it, I couldn’t care less,” Trump added.

“If more Americans paid attention to his advice, we’d have fewer cases of COVID-19, & it would be safer to go back to school & back to work & out to eat,” Alexander wrote on Twitter. The Republican lawmaker is set to retire this year.

Former Vice President Joe Biden also slammed his presidential opponent for insulting Fauci and other public health officials. “The American people are tired,” he said in a statement. “They’re tired of your lies about this virus.”

Trump’s slam against Fauci came the morning after the National Institutes of Health official’s interview with CBS’ 60 Minutes aired. On the broadcast, Fauci suggested the president’s reluctance to wear a face mask in public amid a pandemic is because he “equates wearing a mask with weakness.” Fauci added that Trump’s refusal to adhere to guidelines implemented by his own public-health experts is “less an anti-science [position] than it’s more a statement.”

“You know, a statement of strength,” Fauci said. “Like, ‘We’re strong. We don’t need a mask.’ That kind of thing. He sometimes equates wearing a mask with weakness.”

Dismissing Trump’s claims that the pandemic’s end is near, Fauci admitted during the Sunday interview that he was not surprised that the president contracted COVID-19 after failure to take precautions at White House events. One of those events includes the announcement of Judge Amy Coney Barrett’s nomination to the Supreme Court in the Rose Garden, a gathering attended by at least 13 people who became infected.

“I was worried that he was going to get sick when I saw him in a completely precarious situation of crowded, no separation between people, and almost nobody wearing a mask,” Fauci said. “When I saw that on TV, I said, ‘Oh my goodness. Nothing good can come out of that, that’s got to be a problem.’ And then, sure enough, it turned out to be a superspreader event.”

Fauci also told 60 Minutes that he and his family have received death threats because of his role advising the government’s response to the crisis.

On Monday, Trump specifically attacked Fauci’s media appearance. “Dr. Tony Fauci says we don’t allow him to do television, and yet I saw him last night on @60Minutes, and he seems to get more airtime than anybody since the late, great, Bob Hope,” the president tweeted. “All I ask of Tony is that he make better decisions. He said ‘no masks & let China in.’”

Trump then took aim at Fauci’s first pitch at a Washington Nationals baseball game earlier this year, insisting, “Tony should stop wearing the Washington Nationals’ Mask for two reasons. Number one, it is not up to the high standards that he should be exposing. Number two, it keeps reminding me that Tony threw out perhaps the worst first pitch in the history of Baseball!”

Trump shocked the world when he tweeted at 12:54 a.m. on Oct. 1 that he and wife Melania had both tested positive for the virus, throwing his re-election campaign into chaos and presenting the most serious health threat to a sitting president in decades.

After Trump spent three nights in the hospital, White House physician Sean Conley cleared the 74-year-old president to return to the campaign trail last Monday, stating that he had tested negative “on consecutive days.” Ever since his discharge, however, Trump has downplayed his symptoms and has since posited himself as a “warrior” against the virus, claiming as he was released from the hospital on Oct. 5 that he felt “better than I did 20 years ago!”