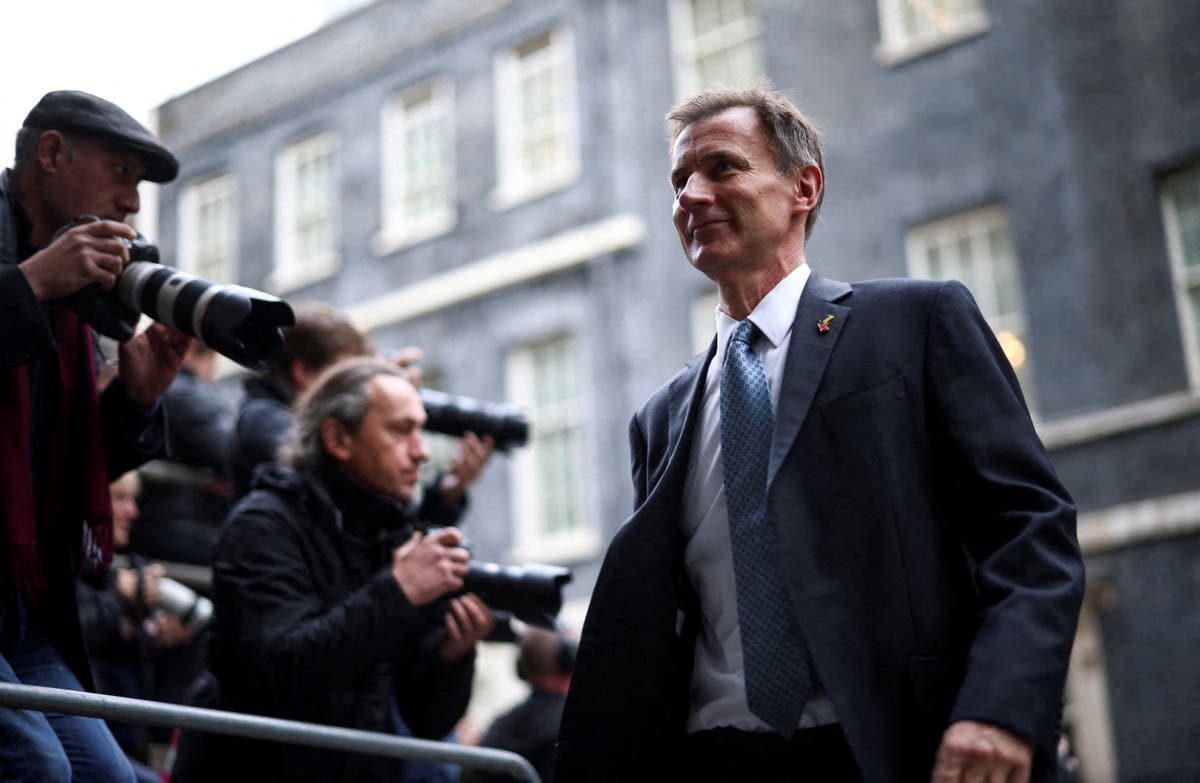 Things can only get even tougher, Chancellor warns as recession looms

Recession on way as the big slowdown hits growth
Chancellor Jeremy Hunt steeled Britain for a wave of tax rises and swingeing spending cuts on Friday as new data showed that the nation was heading towards recession.

Preparing the ground for next week’s Autumn Statement, Mr Hunt warned that “extremely difficult decisions” were needed to restore confidence in the UK’s economy as soaring inflation bites into household budgets and rising interest rates choke off growth.

“It’s not going to be easy,” Mr Hunt said. “There are going to be some very difficult choices. I’ve used the word eye watering before, and that’s the truth.”

The Chancellor’s bleak assessment came after the Office for National Statistics said the UK’s output fell 0.2 per cent in the three months from July to September.

It dropped 0.6 per cent in September alone, although the fall was exaggerated by the impact of the extra bank holiday for the Queen’s funeral. Friday’s figures do not mean Britain is already in recession because the technical definition requires two consecutive quarters of falling GDP.

However, it is increasingly likely that the fourth quarter will see another dip following the surge in interest rates triggered by Kwasi Kwarteng’s disastrous mini-budget at the end of September, combined with rising energy costs, the cost-of-living crisis and plummeting consumer confidence.

Mr Hunt and Prime Minister Rishi Sunak will attempt to repair that damage on Thursday when they are expected to set out around £22 billion of tax rises and £33 billion of spending cuts to plug a fiscal black hole of about £55 billion.

As well as tax rises, the Chancellor is reported to be considering freezing day-to-day spending on public services from 2025-2028 to save £27 billion a year. But that has raised fears of a fresh wave of austerity, crippling already strained public services and a prolonged wave of strike action from public sector workers.

This week nurses voted to strike for the first time over pay. The Bank of England last week projected a two-year recession — the longest for a century — lasting until summer 2024 as it lifted the base rate to three per cent. The Bank warned that the UK economy faced “a very challenging outlook” although it said the recession would be relatively shallow.

The recession will not be confirmed until well into 2023 when the GDP figures for the fourth quarter are published by the ONS. It would be the third of the 21st century following the slumps caused by the global financial crisis and pandemic. Policymakers had hoped that Britain’s economy would bounce back strongly from the deep Covid-era falls in economic activity caused by three lockdowns and other restrictions.

However, this has been snuffed out by factors including global supply chain snarl-ups, spiking energy prices made worse by the war in Ukraine, Brexit problems and rapidly rising interest rates around the world to curb inflation. The lower than expected US inflation figure yesterday raised hopes that the worst of the cost-of-living crisis could be over.

Mr Hunt pointed to challenges being faced by other major economies and added: “What we need is a plan that shows how we are going to get through this difficult period. If it is a recession, how we make it shallower and quicker.”

Labour’s shadow chancellor Rachel Reeves blamed the Conservatives for their botched management of the economy. She said: “The reality of this failure is family finances crunched, British businesses left behind and more anxiety for the future.”

The ONS said the quarterly fall, which was slightly smaller than predicted by some City economists, was driven by manufacturing, which saw widespread declines across most industries. Services were flat overall.

Consumer-facing industries fared badly, with a notable fall in retail. Yael Selfin, chief economist at KPMG UK, said: “The current downturn is likely to last until the end of 2023, during which GDP is expected to shrink by 1.6 per cent.”
#Covid