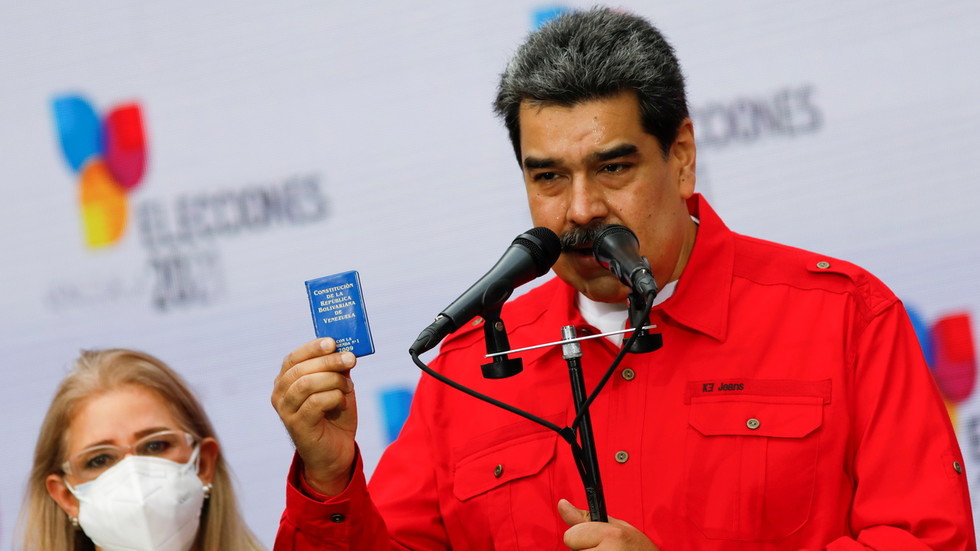 Recent elections in Venezuela saw Nicolás Maduro’s leftist ruling party win 20 out of 23 governorships. The US predictably cries foul, but I witnessed voting that was perfectly free and fair.
Western media and the United States government had already made up their mind on the recent “mega-elections” in Venezuela before the polls had even opened: the ‘dictator’ Nicolás Maduro would win by using fraud.

This smear is in direct contradiction to the conclusions of most of the hundreds of electoral observers from international political parties, from the European Union, the United Nations, and even the Carter Center, which has been absent from Venezuela for years. I know, because I was one of those official observers.

The EU came out with a report that noted significant improvements (in their eyes) in the electoral process in the country, and did not question their legitimacy. Caracas welcomed the EU conclusions, with Vice Minister William Castillo calling the EU findings a “slap in the face” for US State Department claims that the elections were fixed.

This was the first time in four years that the country’s right-wing opposition has participated in elections, and they suffered a resounding defeat with Maduro’s governing party winning 20 out of 23 governorships.

The boycott strategy is the same that the right sometimes applied during the years that Hugo Chavez was president, such as during the 2005 legislative elections. It’s paradoxical that the opposition in Venezuela has cried fraud and dictatorship everytime they have lost, yet when they won in 2015 with the same electoral system, the same authorities, and the same political landscape, they celebrated and called it a triumph of democracy.

One of US hegemony’s biggest adversaries has just won big in democratic and fair elections, so the big question is what will be America’s next steps. Many people are hoping that the Biden administration will make good on their talk of easing some of the unilateral coercive measures against Venezuela, but it does not seem like this hope is well placed.

Brian Nichols, a sub-secretary of state, said last week that the United States will continue working with the “Guaido government”, and that there were “no plans to change” its recognition of this fictional government. Antony Blinken, the US secretary of state, also came out with a statement that said: “The Maduro regime deprived Venezuelans yet again of their right to participate in a free and fair electoral process”. He then went on to somewhat contradict himself by adding, “We commend the political parties and candidates as well as voters who decided to participate in this process despite its flaws”.

One of the ways that the media has attempted to downplay the importance of these elections is by attacking the turnout rate of 42%. This turnout rate is actually higher than the US’ own turnout rates in elections across the board for the years 2014, 2010, 2006 and 2002. Unlike in too many US elections, we had the results for the election in Venezuela within a day, and there was no evidence of fraud being employed.

As of now there is no instance of the candidate receiving less votes being declared the winner, which routinely happens in US presidential elections. There are no things like “hanging chads” or “butterfly ballots” in Venezuela, and it is impossible for a person to vote twice as votes are tracked by fingerprints.

Former US President Jimmy Carter once said: “Of the 92 elections that we've monitored, I would say that the election process in Venezuela is the best in the world.” Venezuela utilizes an electronic voting machine that is unlocked only when a voter’s fingerprint and ID are confirmed; the voter’s choice is safeguarded by the printing of a paper receipt which confirms the vote is correct and is then also placed in a voting box. Then 54% of the votes are automatically audited to ensure transparency.

There are many reasons why Chavismo and the United Socialist Party of Venezuela of Hugo Chavez and Nicolas Maduro was overall victorious in this latest election, and in all but two elections held since 1999. The Bolivarian Revolution has eliminated illiteracy from Venezuela, built over 3.8 million homes for the people, decreased inequality, empowered protagonistic democracy, and so much more.

The CLAP program ensures food access to millions of Venezuelans even as the country suffers under crushing US sanctions. Things are not perfect in Venezuela, but the fact that this model of social inclusion and economic diversification continues to win elections and flourish even under constant onslaught by the world’s financial sectors and the United States is why it is regarded as a threat by Washington. Because it shows Americans and people the world over that there is a shining, viable alternative to unbridled capitalism.