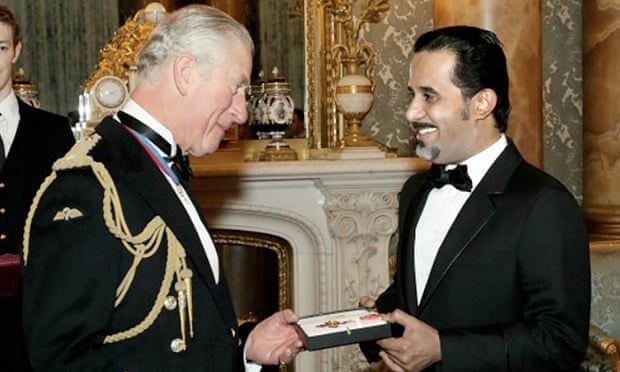 Businessman and philanthropist Mahfouz Marei Mubarak bin Mahfouz received CBE from Prince Charles in 2016
The son of one of Saudi Arabia’s richest men, Dr Mahfouz Marei Mubarak bin Mahfouz, has hardly any information listed about him on his charity’s website, but has the honour of a wood, a fountain, a garden and a building named after him among some of Britain’s oldest and most prestigious buildings.

The 51-year-old businessman and philanthropist has donated generously to Oxbridge colleges, as well as royal mansions Dumfries House and the Castle of Mey. The website for the Mahfouz Foundation, which he founded in 2012, shows simply a photo of Mahfouz, alongside his full name and list of honorifics.

Given an honorary CBE by Prince Charles in a private ceremony in 2016, the businessman’s aides began contacting the Prince of Wales in 2011 regarding a potential honour, according to the Sunday Times. Mahfouz had been advised that securing honorary roles and awards would help his attempt to secure British citizenship or residency through a “golden visa”, in the tier 1 investor scheme which awards residency in exchange for investing £2m.

Described as having a “strong interest in British culture”, Mahfouz launched a charity “to promote and advance the education of the public in the United Kingdom in the culture, history, language, literature and institutions of the Middle East”, according to Charity Commission listings.

His family fortune was made through hotels, property and manufacturing. Mahfouz is the executive officer of the Saudi-based Marei bin Mahfouz Group, founded by his father Sheikh Marei Mubarak Mahfouz bin Mahfouz.

As well as the Mahfouz Fountain and Garden at Dumfries House, the businessman boasts a forest to the east of the Castle of Mey, the Queen Mother’s former residence, Mahfouz Wood. There are also benches sporting the names of Mahfouz, his father and four brothers around the castle’s gardens after a donation to the charitable trust.

Mahfouz was also made the inaugural Bredon fellow of Wolfson College, Cambridge in July 2013, after what the college described as a “munificent donation”.

Mahfouz is also the vice-president of the British Forces Foundation, whose patron is Prince Charles.