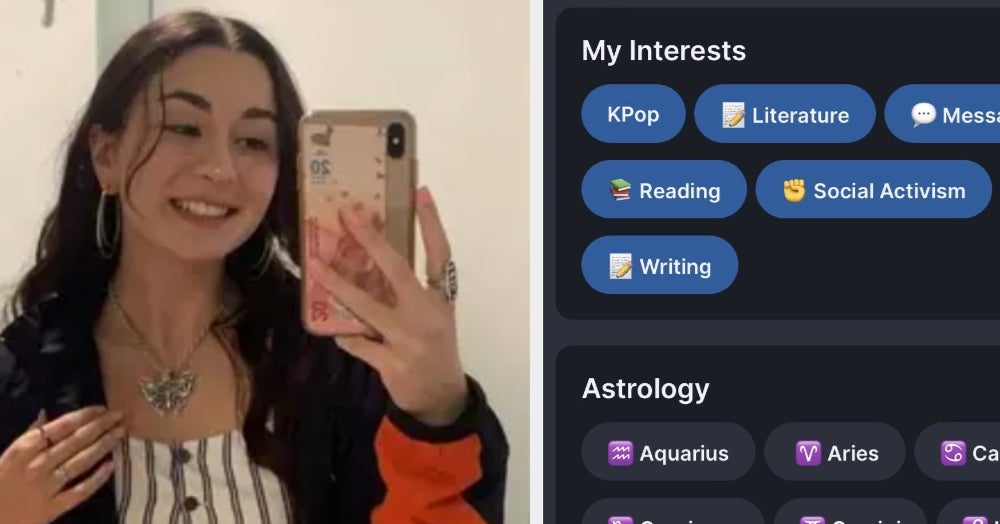 The Patio App Is Facebook For Gen Z College Kids

Carolina Janicke is very excited to go to college. “I heard my dorm building is very social, but there are roaches,” the 18-year-old told me. But luckily she’s already got someone to help her fight the University of Michigan pests, a roommate she met on the college student–only app Patio.

Incoming first-year college students are embracing Patio as a way to meet people before school begins, taking away the “Will I make friends?” terror. “You start in this big group chat with everyone in your year, and then there’s subgroups you can join — I’m in the Latinx students one. There’s ones for specific programs, so I’m in the art school subgroup, a restaurant one, and this random one we called the Lettuce Club,” Janicke said. “Every time someone eats lettuce, they share a picture of it with the group.”

A social media platform for college students that you need a school email to sign up for? Correct, this does sound a lot like early Facebook, but there’s no need to deepen the generational disdain even further over it.

TheFacebook was first created by supervillains who originally wanted to provide an online directory for students within Harvard University, after creating the primitive “hot or not”–type site Facemash that served to objectify women.

Patio was founded by students at the University of California, Davis, (future democracy-impacting billionaire status as yet undetermined) who wanted to create a space to connect with others during the pandemic. While it was initially launched for current students, the Patio team told their school newspaper that they wanted to focus on incoming students.

“I don’t think any kid actually uses Facebook now,” said Flynn Goel, another incoming Michigan student. He is coming from out of state, so Patio has been the most accessible tool for him to meet people and question locals about what to expect. “I’ve asked what the dining halls are like, the quality of the food.”

“I liked Patio because I know I’ll get an answer in a few minutes, since there are so many people on there,” he told me. “Especially since I’ll be pretty far away from home.”

The infrastructure of a Patio account is highly reminiscent of a dating profile. You can put up to six pictures of yourself, followed by space for a bio, social media handles, as well as interests. After all, these students are searching for something much more serious than romance — college roommates often end up being lifelong friends.

“It definitely feels like Tinder or something,” Janicke said. 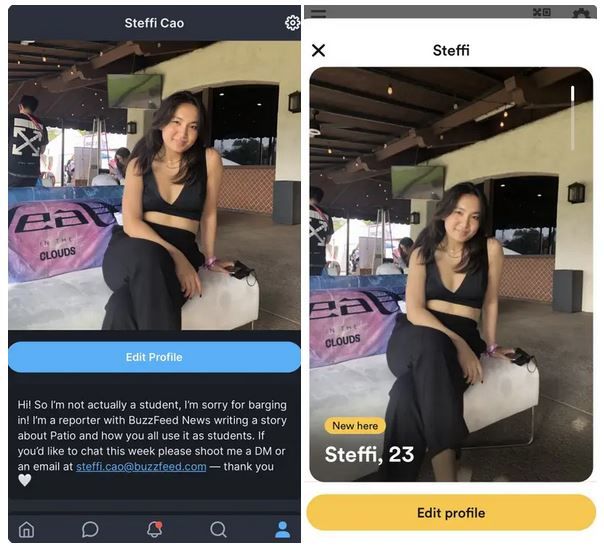 I used my old college email address to register, where I was put into the University of Michigan class of 2026 group chat, which has almost 3,000 members. In the large chat, and the subsequent breakout chats, you are able to see an online directory of your peers.

Poking around Patio, I was able to search students by interest, but I was told by Janicke it is not the appropriate etiquette to just DM someone who also likes cycling.

Josh Freedman, 18, said he’s already met up with several other admitted students IRL from Patio. (He’s another incoming Michigan student, since of course that’s who I could speak with.)

“It took away the element of feeling like you don’t know anyone,” he said. “I’ve already formed friendships with people, from all over, who I know I’ll want to hang out with on campus.”

At first, the Patio convo is a huge group chat, with people introducing themselves. Then, they break down into smaller groups of people in the same dorms or who share common interests.

Snapchat, according to Freedman and Janicke, was the most common off-platform app to move next to. “It feels more low stakes,” Janicke said. “Also, I don’t know, maybe it’s easier to figure out if someone is a catfish?”

But figuring out how to write a Patio bio and post photos that represent the kind of person you are — or want to be in your new college life — isn’t easy.

“I chose a good portrait photo of me first, and then a photo of me running at a cross-country race, because I wanted people to know I like sports and staying fit,” Freedman said. “Then another one with my friends so people would know I’m outgoing and I love to meet new people, and hanging out with friends. So there’s no apprehension about reaching out.” 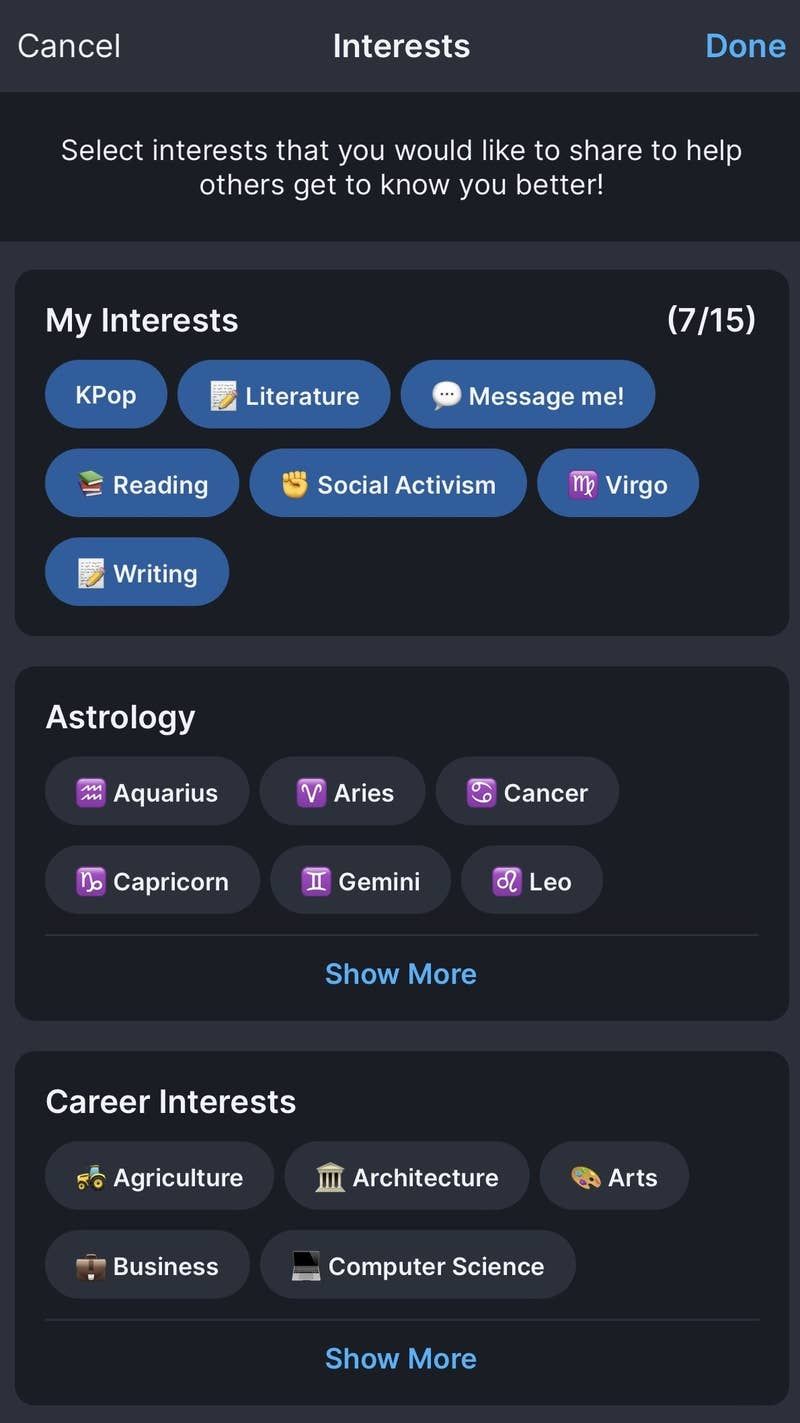 The general advice that the students offered to me was that the last photo should feature a blurry, mid-laughter mirror selfie or appropriately awkward expression to show that you are funny and have a personality.

The bios on Patio are also written with a tentative clumsiness of trying to find common ground. Students state their major and some of their interests. “I love cars, shoes and photography,” Janicke’s bio reads. “If you wanna be friends just ask me about my two dogs.”

Online friends are a norm in the age of repeated social isolation, so Patio providing a space to chat and bond is at least helping these incoming first-years feel comfortable moving away from home.