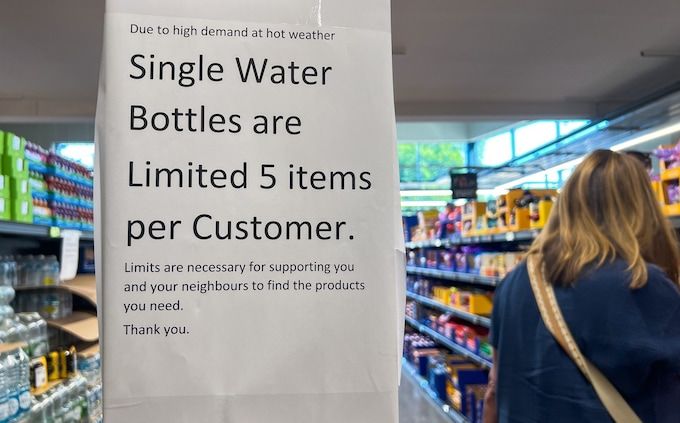 Supermarket rations bottled water as drought declared across half of England

Listen to the article
0:00 / 0:00
Voice by MediaWorks
Eight of England's 14 Environment Agency areas move into drought status, including East Midlands, London and Devon and Cornwall
A supermarket has imposed a limit on customers buying multi-packs of bottled water after an official drought was declared across parts of southern England on Friday.

The Aldi supermarket in Haringey, north London, put up signs telling customers they could only purchase five single water bottles each, while the limit for multi-packs was three per person.

The signs said the policy was “due to high demand” in hot weather, adding: “Limits are necessary for supporting you and your neighbours to find the products you need”.

It is understood it is not a nationwide Aldi policy, and that the London supermarket in question had enough bottled water in stock on Friday morning.

It comes as the Department for Environment, Food and Rural Affairs said more than half of England is to be moved into drought status following the driest summer in almost 50 years.

Yorkshire and the West Midlands are expected to move into drought later in August.