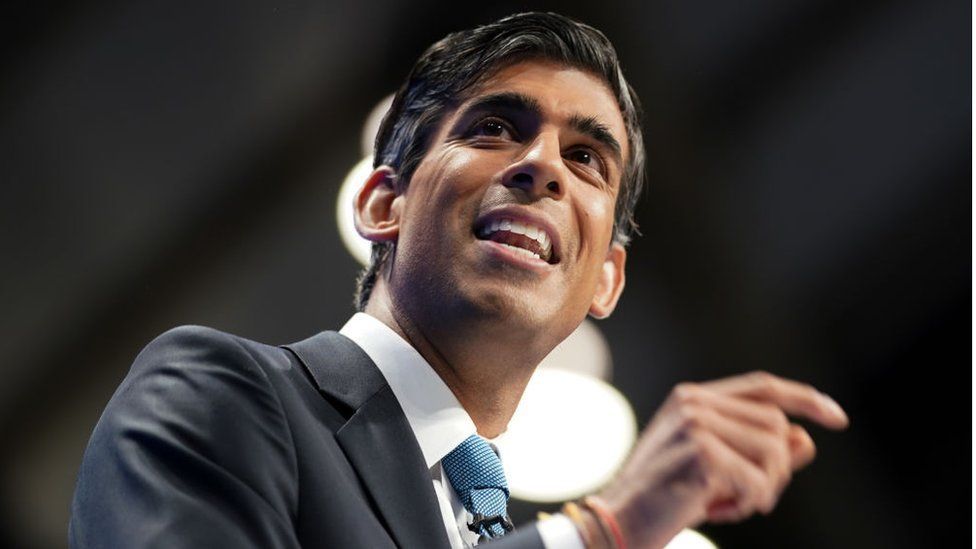 Sunak: Ministers "doing all we can” to fix supplies for shops.

Well, this brave statement is exactly the problem and not the solution. When politicians say we're "doing all we can", it generally means - as in this case - they're doing nothing, just blowing hot air. If they were able to do something useful instead of just sweet-talking, they would find decent jobs and not disgrace themselves by spending their lives in such a shabby, low-life occupation. Sending a PR picture to the press comparing Rishi Sunak to Jesus Christ will not allow our sainted Chancellor to ascend to the next celestial level. He's still just a smarmy (if smart) politician who doesn't believe the promises he makes. Similar to Jesus: “You'll be rewarded, next life; just give me your money, this life".

In recent days, several retailers have warned of potential shortages during the Christmas shopping season.

Speaking to the BBC at the end of G7 meetings in Washington, Mr Sunak blamed global factors for delays seen at ports such as Felixstowe.

It comes as G7 finance ministers agreed to work together to address the issues.

Mr Sunak said: "I'm confident there'll be a good amount of Christmas presents available for everyone to buy."

His comments came after a container logjam at ports, including Felixstowe, and a shortage of HGV lorry drivers has sparked concerns among businesses, ahead of the most important period of the year for retail spending.

On Wednesday, the UK's largest commercial port said the supply chain crisis has caused a logjam of shipping containers.

The Port of Felixstowe, which handles 36% of the UK's freight container traffic, blamed the busy pre-Christmas period and haulage shortages.

However, it said the situation has been improving over the last few days.

Meanwhile, shipping giant Maersk told the BBC it was rerouting some of its biggest ships away from the port.

At the same time, one of biggest ports in the US will start operating 24 hours a day to try to clear long queues of cargo ships.
The Port of Los Angeles in California said it will handle more goods at night after a similar move by nearby Long Beach port.
The ports - which handle 40% of all cargo containers entering the US - have faced months of problems.

Major US firms such as Walmart and FedEx have also committed to increasing their round-the-clock operations to help clear the jam, the White House said on Wednesday.

Mr Sunak was speaking after the G7 agreed to work more closely together to monitor issues facing the movement of goods around the world.

The meeting of finance ministers and central bank governors discussed the importance of global co-operation to ensure that supply chains are more resilient as the world emerges from the pandemic.

The G7 (Group of Seven) is an organisation of the world's seven largest so-called advanced economies. They are Canada, France, Germany, Italy, Japan, the UK and the US. Ministers and officials from the member countries hold meetings, form agreements and publish joint statements on global events.

In the BBC interview, Mr Sunak largely focused on the situation for industry in the UK - and he said he completely rejected the assertion of the head of UK Steel that the government had created a "hostile environment" for industrial investment and levelling up.

But when asked if he, as chancellor, was prepared to accept that high gas prices would put some heavy industry out of business he said he had to make sure taxpayers' money was protected and that "it's not the government's job to come in and start managing the price of every individual product".

However, the chancellor also said "everyone" including Mr Johnson accepts that increasing wages without increasing productivity would be inflationary.

He said the move to a high wage, high-skill economy advocated by Mr Johnson would "obviously take time".