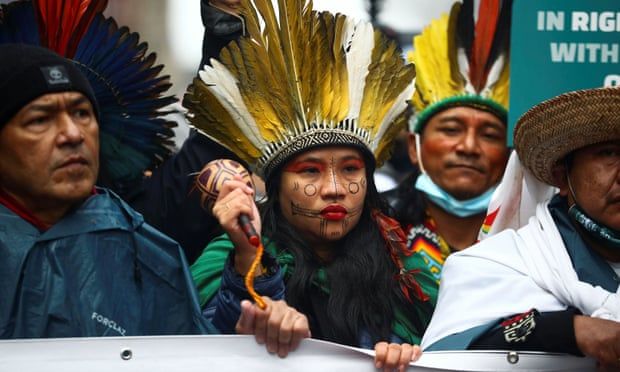 So what has Cop26 achieved so far?

Agreements on deforestation, methane and coal were welcome news. Less so was some countries’ absence from major initiatives

In terms of national carbon pledges, India provided the best news last week, with prime minister Narendra Modi announcing that the country – currently a major polluter – intends to generate half its electricity from renewables by 2030 and achieve net zero emission status by 2070.

Most experts rate the latter target as extremely ambitious and, according to the journal Nature, many suspect it is more likely that India’s plan is to reach net zero only for carbon dioxide by 2070, with other greenhouse gases coming later. Nevertheless, the move is significant and contrasts sharply with the poor emission commitments made to date by Saudi Arabia, the planet’s second-biggest oil producer, and by Russia, its second-biggest gas provider. Much, in short, remains to be done.

Felling trees contributes to climate change because it depletes forest cover, which is vital for absorbing carbon dioxide. Forests are, it’s said, being cleared at a rate of 30 football pitches’ worth a minute. An agreement to call a halt to this staggering level of deforestation – reached on Tuesday – was one of the high points of Cop26’s first week. As part of the deal, more than 100 world leaders agreed to reverse deforestation by 2030. Crucially, Brazil –which has cut down huge stretches of the Amazon rainforest in recent years – was among the signatories. However, observers have pointed out that a previous international agreement, in 2014, failed to slow deforestation in any way. On the other hand, the latest pledge is being backed with some serious money: almost £14bn ($19.2bn) of public and private funds. Some of this money will go to developing countries, to restore damaged land and help tackle wildfires. 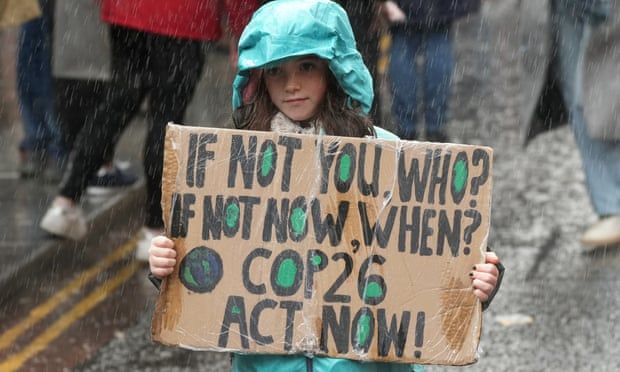 A climate protestor in Glasgow this weekend.

Carbon dioxide may be the principal driver of global warming, but methane is also a potent greenhouse gas, and atmospheric levels have surged over the past decade. The commitment – by an alliance of more than 90 nations, representing two-thirds of the global economy – to reduce methane emissions by at least 30% from current levels by 2030 is therefore considered an important, albeit belated, step forward.

“Cutting back on methane emissions is one of the most effective things we can do to reduce near-term global warming and keep it to 1.5°C,” said European Commission president Ursula von der Leyen. Methane is emitted from gas and oil wells, pipelines, livestock, and municipal landfill sites, and much of the effort – to be led by the US – will involve companies being obliged to plug leaks in more than 3 million miles of pipelines. Significantly however, China, India and Russia have not pledged to cut their methane emissions.

Greenhouse gases produced by burning coal are the single biggest contributor to climate change. Weaning the world off coal is considered critical in limiting temperature rises across the planet.

“I think we can say the end of coal is in sight,” said Alok Sharma, British president of the two-week summit, detailing an agreement to phase out existing coal-fuelled power plants and stop building new ones. Signatories of the non-binding pledge include major banks and, he said “46 countries … 23 of which are making commitments on ending coal for the first time”.

However, the absence of Australia, India, the US and China from the pledge to drop coal has drawn criticism. “The key point in this underwhelming announcement is that coal is basically allowed to continue as normal for years yet,” said Jamie Peters, director of campaigns at Friends of the Earth.

The International Energy Agency (IEA), the world’s energy watchdog, reacted fairly enthusiastically to the pledges made so far. “New @IEA analysis shows that fully achieving all net zero pledges to date & the Global Methane Pledge by those who signed it would limit global warming to 1.8C,” the agency’s director, Fatih Birol, wrote on Twitter last Friday. But Selwin Hart, the special adviser to the UN secretary-general on climate action, challenged the assertion. “Fatih, I heard your numbers,” he said in Glasgow. “But based on the nationally determined contributions that have been submitted, the world is on a 2.7 degree pathway – a catastrophic pathway.”