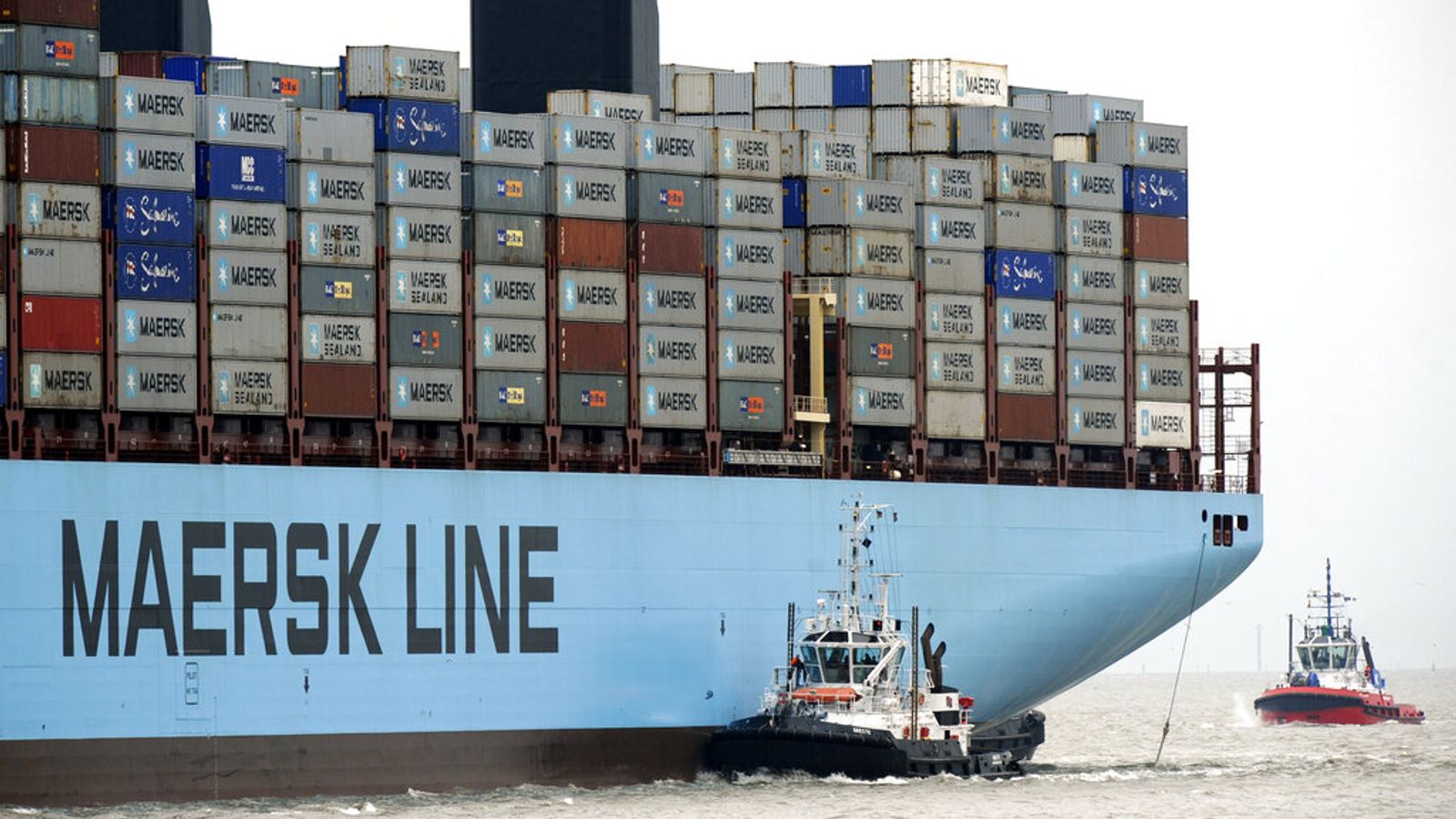 Anyone worried that a global recession is looming will take no comfort from the trading update issued today by AP Moller-Maersk.

The Danish company, the world's biggest name in container shipping, is usually a reliable indicator of what is happening - or about to - in global trade.

And its message today was not encouraging.

'Dark clouds on the horizon'

Soren Skou, the company's chief executive, said it was clear that, following an exceptional period of trade, freight rates had peaked and had begun to normalise during the last three months. He said this was driven by both decreasing demand and easing of supply chain congestion.

Mr Skou added: "With the war in Ukraine, an energy crisis in Europe, high inflation, and a looming global recession - there are plenty of dark clouds on the horizon. This weighs on consumer purchasing power which in turn impacts global transportation and logistics demand."

His warning sent shares of Maersk, which more than doubled in value between the end of January last year and the middle of January this year, down by more than 7%. The company, the second largest on Denmark's blue-chip OMX 20 index after the drug-making giant Novo Nordisk, has seen its stock market valuation fall by two-fifths since it peaked on 13 January.

Mr Skou went on: "As a result of increasing inflation and economic slowdown, demand for ocean shipping began to decline in August and this was clearly observed in both rates and volumes."

He said Maersk now expected full-year contract rates to be slightly lower than it was expected earlier in the summer - largely due to volumes on east-west ocean routes seeing a 10% decline in volumes year on year.

The comments from Maersk, which employs more than 80,000 people worldwide and which has a 17% share in the market for ocean-bound freight, are an ominous indication that trade is slowing globally.

Mr Skou said the company had been "anticipating normalisation" for quite some time and was ready for it.

He went on: "We are pulling back our outlook for the industry and expect global container demand to decline by 2-4% in 2022. From the global market data we can all observe, it should be clear that the risk [to that forecast] is to the downside going forward."

Patrick Jany, the chief financial officer, said that freight rates in shipment were expected to suffer a "pronounced deterioration" in the coming months. 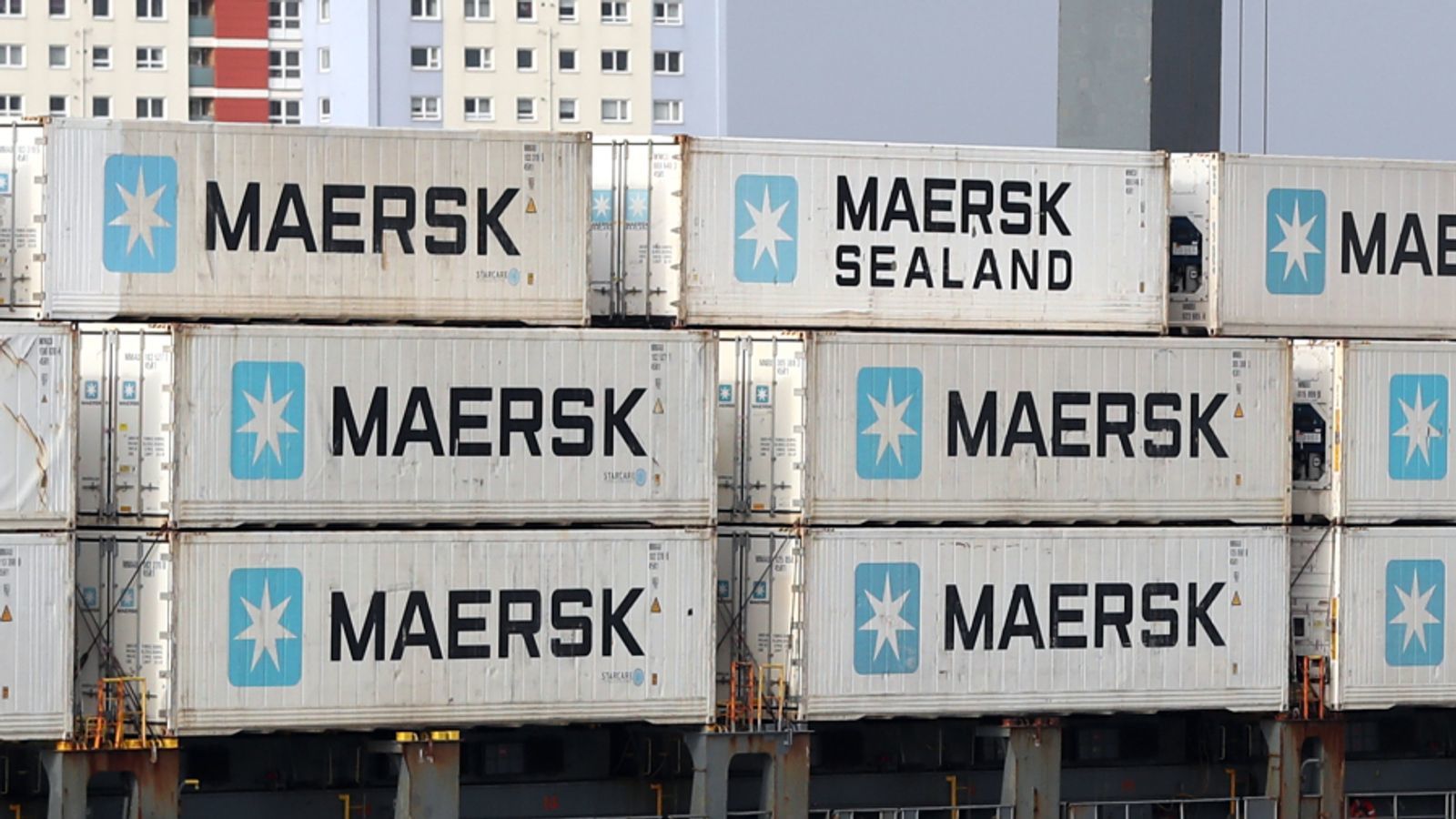 Costs to come down

He said it would be prudent to assume that new contracts would be on lower terms going forward but said costs could be expected to come down as congestion at ports around the world - caused partly by Chinese COVID-related lockdowns - begins to recede. Unfortunately, he added, this would be matched by ongoing inflationary pressures.

The irony is that Maersk was reporting record quarterly results, with pre-tax profits for the three months to the end of September coming in at $9.17bn (£7.9bn), an increase of 62% on the same period last year.

It was the 16th consecutive quarter in which the company had reported a rise in earnings. During the first nine months of the year, Maersk made pre-tax profits of $24.9bn (£21.6bn), just over double what it achieved in the same period in 2021.

Sales in ocean shipping, the biggest part of the business, were up by 38% while in the land-based logistics and services arm, the next biggest division, they were up by 61% although that was partly flattered by acquisitions.

Mr Skou said the positive aspect of normalisation in shipping conditions was that global supply chains would begin to improve and would also help Maersk deliver a more reliable service in ocean shipping.

He said that shipping companies were starting to respond by taking capacity out of the market and this was likely to continue.

He added: "Every carrier will do what they think is right but I note that both in the Pacific trade and Asia-Europe trade, 15% of capacity has come out now so one could expect to see more capacity adjustment to meet demand in coming quarters - at least that would be our strategy."

The Maersk CEO said the company was not defining itself by its volumes and was not aiming to win market share in ocean shipping - rather it was looking to gain a greater share of spending from its existing customers.

He went on: "It's not half a percentage point of [extra] market share that is going to get us very excited." 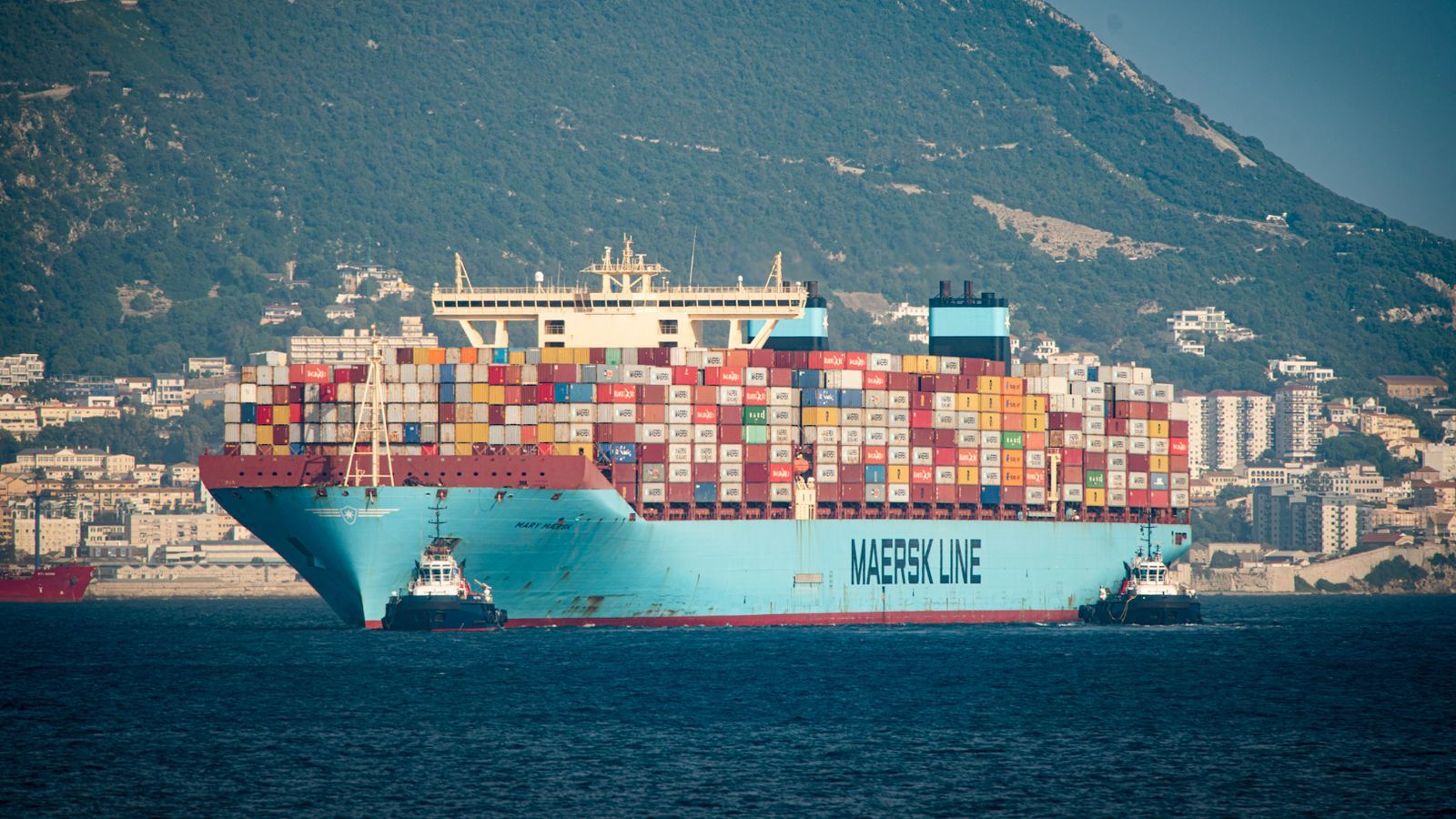 Those comments underline that the shipping industry is getting rather better at responding to prevailing economic conditions than it has been at times in the past. There was once a time when, rather than reduce capacity, shipping operators preferred to engage in futile price wars that simply resulted in a collapse in industry profits.

Signs that lessons had been learned came when, at the start of the pandemic, Maersk and others took a disciplined approach to withdraw capacity in response to an expected collapse in global trade.

In the event, the industry was pleasantly surprised, with demand surging as households subjected to COVID lockdowns spent money that they would have done on going out on consumer goods instead. That, along with previous capacity reductions and ongoing congestion in ports, means shipping containers around the world remain costlier than it did prior to the pandemic.

But it feels as if that boom is now over.

As Mr Skou put it in his concluding remarks to investors and analysts this morning: "We have a challenging year, or years, ahead of us as the world faces a combination of geopolitical uncertainty and inflationary pressure that we have not seen for decades."