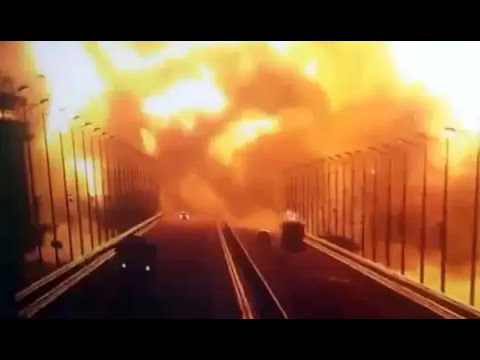 Listen to the article
0:00 / 0:00
Voice by MediaWorks
A giant explosion ripped across the Crimean Bridge, a strategic link between mainland Russia and Crimea, in what appeared to be a stunning blow early Saturday to a symbol of President Vladimir Putin’s ambitions to control Ukraine.
Ukrainian truck bomb had caused the blast, and fire sent part of the 12-mile Kerch Strait bridge tumbling into the sea and killed at least three people.

The damage to the bridge, which provided a road and rail connection between Russia and the Ukrainian peninsula that the Kremlin annexed in 2014, is a setback to Russia’s war effort in Ukraine, disrupting a crucial supply route and prompting new criticism, in public, about Putin’s handling of the war. Alexander Kots, a pro-Kremlin correspondent for Komsomolskaya Pravda, urged the country’s commanders to emulate Ukraine’s war-fighting philosophy: “Nothing is impossible,” he wrote, “the Ukrainians show us.”

Putin accuses Ukraine of Crimea bridge explosion, says it was a "terror attack" against critical infrastructure of the Russian Federation.

But destruction of a civilians critical infrastructure is a terror only if its done by others. otherwise its a "legitimate war for a better world"...