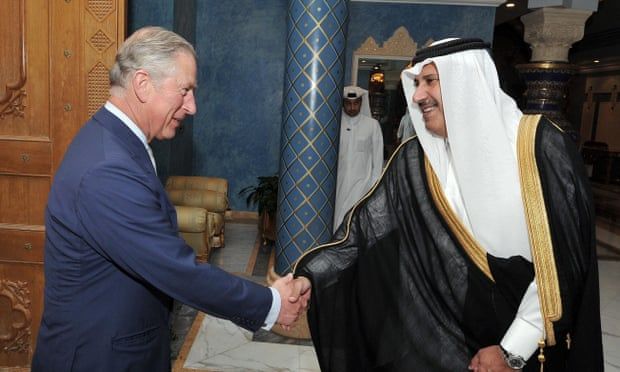 The billionaire Sheikh Hamad bin Jassim bin Jaber al-Thani, who was Qatar’s prime minister and foreign minister between 2007 and 2013, is a contentious figure.

He reportedly built close ties with British royalty, is an occasional visitor to the Castle of Mey, the Scottish former home of the Queen Mother, and once gave Charles a £147,000 horse named Dark Swan, it has been reported.

Last year, another of Charles’s charities, the Prince’s Foundation, hit the headlines after it was revealed by the Mail on Sunday that Charles’s closest confidante, Michael Fawcett, had offered to help a Saudi billionaire obtain a knighthood and UK citizenship in exchange for generous donations.

Fawcett dramatically stepped down as chief executive of the foundation after a letter emerged to an aide of Mahfouz Marei Mubarak bin Mahfouz, who had donated thousands to the charity, in which he said the charity would be “happy and willing” to use its influence to help Mahfouz.

The Metropolitan police announced earlier this year it had launched an investigation into the so-called “cash-for-honours” allegations. Charles was not aware of the offer of help, according to Clarence House, and Mahfouz, who in the end did not receive either knighthood or citizenship, is not accused of any wrongdoing.

The Prince’s Foundation also faced cash-for-access allegations after claims that a society fixer acted as a middleman offering to set up dinners and overnight stays at Dumfries House, the Palladian mansion in Ayrshire Charles saved and renovated. It was reported that a former Russian banker, Dmitry Leus, allegedly donated £500,000, though the charity only received £100,000, which in the end was returned to the fixer when it was decided he was not a suitable donor.

In the past Clarence House has said that all of the prince’s charities “operate independently of the prince himself in relation to all decisions around fundraising” and that their trustees “are responsible for all operational and governance duties”.

In 2003, it emerged the wife of the Turkish billionaire, Cem Uzan, was seated next to Charles at one of several dinners the couple enjoyed as guests, having donated £400,000 to the Prince’s Foundation. A tightening up of vetting procedures for donors was reportedly implemented after it later emerged that Uzan was under investigation for fraud-related offences in the US.