Patrick Lyoya: Family calls for officer involved in fatal shooting to be named

The video shows Patrick Lyoya was fatally shot by a police officer in Grand Rapids, Michigan this month. The policeman who murdered him got 3 month fully paid holiday…

The brother of the black man fatally shot by US police this month called video of the shooting "the most horrifying thing" he has ever seen.

Michigan police this week released footage of a police officer shooting Patrick Lyoya, 26, in the head after a scuffle over a Taser.

Mr Lyoya's family, Congolese refugees, addressed media on Thursday and called for the officer's name to be released.
State police are investigating the incident, which has led to protests.

Footage of the 4 April incident in Grand Rapids, Michigan, a town some 150 miles (240km) west of Detroit, shows Mr Lyoya running from the officer following a traffic stop.

There is an altercation over the officer's Taser, before the officer appears to shoot the man as he lies face-down on the ground.

During Thursday's press conference, Mr Lyoya's father said through a translator: "My life has come to an end."

Dozens of demonstrators gathered on Wednesday outside the Grand Rapids Police Department (GRPD) demanding the name of the police officer involved be made public.

Authorities said the officer would not be identified unless criminal charges were to be brought against him.

Mr Lyoya is originally from the Democratic Republic of Congo and had lived in Grand Rapids for about five years, according to the office of civil rights attorney Benjamin Crump, who is representing the Lyoya family.

Mr Crump on Thursday said of the shooting: "There is no way to try to spin it or justify it."

He called for the officer be fired and charged.

"What you see in that video is unnecessary, unjustifiable excessive use of fatal force. You see a police officer escalate a minor traffic stop into a deadly execution," he said.

GRPD chief Eric Winstrom has called the shooting a "tragedy". 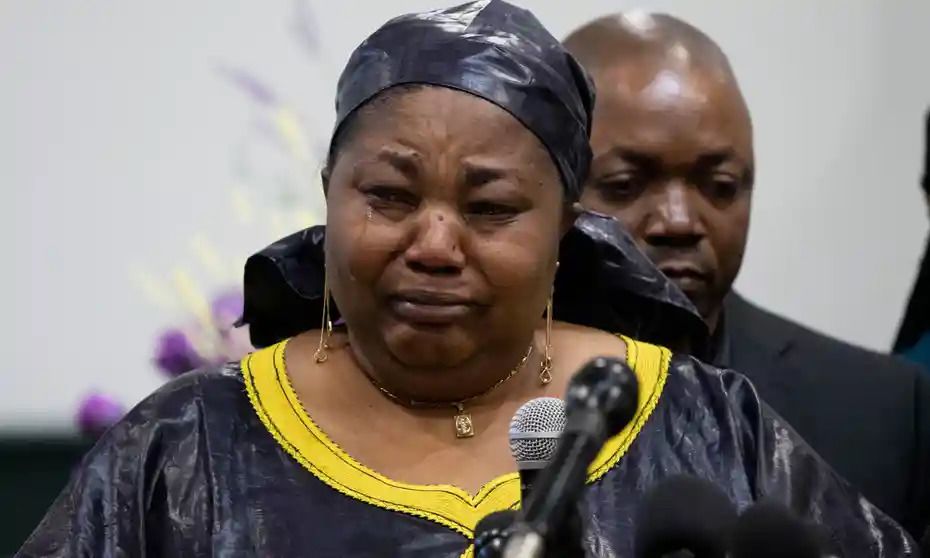 What do the videos show?

On Wednesday, the GRPD released footage of the incident from a police body camera, a police unit's dashcam, a mobile phone and a home surveillance system.

One of the videos shows the officer pulling over Mr Lyoya's vehicle shortly after 08:00 local time (12:00 GMT) on 4 April.

The officer decided to stop the car for improper registration, according to the video footage.

Mr Lyoya gets out of the car, but the officer asks him to get back in.

Appearing confused, Mr Lyoya stays out of the vehicle and asks what he has done. The officer asks if he speaks English, and Mr Lyoya replies "yes".

Mr Lyoya is then asked repeatedly if he has a licence, and after a brief conversation he runs from the officer.

The two are then seen wrestling on the ground and the policeman gets out his Taser, which the two fight over. The officer tells Mr Lyoya to let go of the stun gun.

During this altercation the officer accidentally turns off his body camera, according to police.

However, footage filmed from the mobile phone of Mr Lyoya's passenger has also been released, which appears to show the officer shooting Mr Lyoya in the back of the head.

The police officer is currently on administrative leave pending the outcome of the investigation.