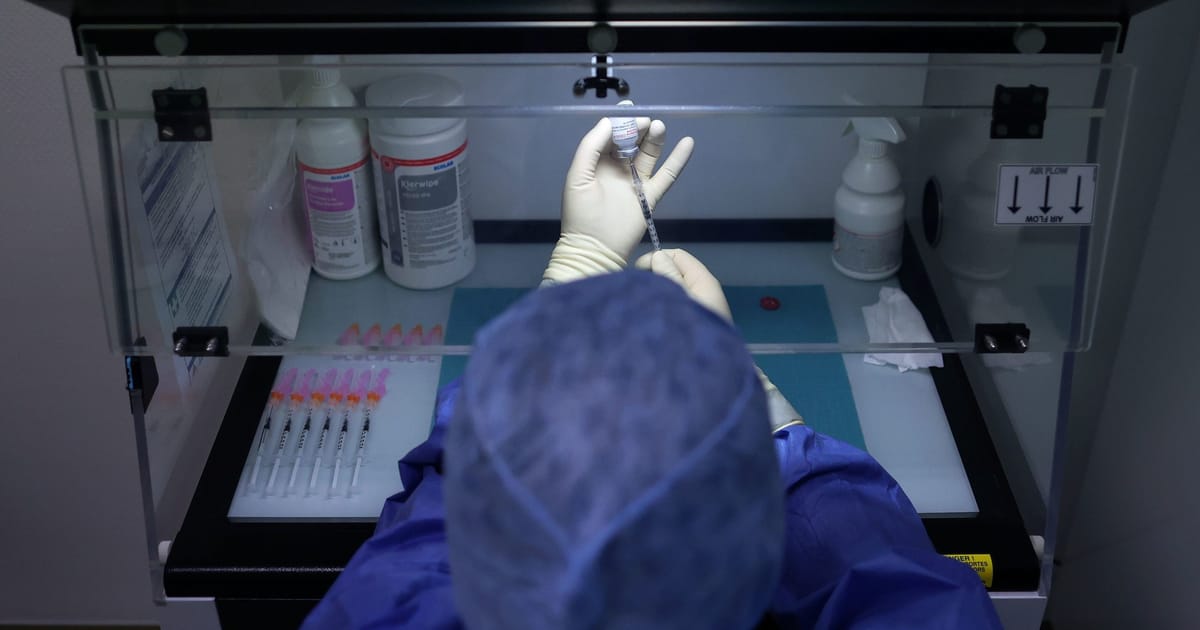 The technology that saved the day during the COVID-19 pandemic is on the cusp of doing the same for cancer.

Preliminary results from Moderna's ongoing trial of a personalized mRNA cancer vaccine given alongside an immunotherapy from MSD showed a “statistically significant and clinically meaningful reduction in the risk of disease recurrence or death,” the company said Tuesday.

The positive results from the phase 2b trial that tested the vaccine's efficacy and safety paves the way for the final stage of research and then potentially a future approval for the first mRNA cancer vaccine.

Moderna became a household name during the pandemic when its mRNA vaccine became one of two vaccines of choice for many countries. But while the company was delivering hundreds of millions of COVID-19 vaccines around the world, it was also working on trials of its pipeline of different types of cancer vaccines, including one that targets specific gene mutations.

Leading the pack is the company's personalized cancer vaccine. The vaccine, which is being delivered alongside MSD’s immunotherapy Keytruda, is meant to stimulate an immune response based on a patient’s specific tumor. Keytruda then helps the patient’s immune cells to more effectively fight the cancer. The hope was that by working together, the vaccine and the immunotherapy would be able to “bring the power of the immune system to bear on the cancer and to kill it,” said Moderna’s Chief Medical Officer Paul Burton in an interview with POLITICO.

While the current trial is testing the vaccine for melanoma, Moderna is planning additional studies to test it on other cancers. Speaking before the results were released, Burton said that if the trial succeeded it would “be a new paradigm shift, [a] foundational shift that we haven't seen for at least a decade, in a new therapeutic approach for cancer.”

Those hopes appear to have been realized. Preliminary results released today of the trial of 157 melanoma patients indicate that the risk of recurrence of cancer or death was 44 percent lower in those receiving both the vaccine and Keytruda compared to those receiving the immunotherapy alone. The next step is to publish the full data set and start discussions with regulators. Moderna and MSD plan to begin the larger phase 3 trial, which will test effectiveness in more people, in 2023 and “rapidly expand to additional tumor types.”

Cancer is the next major target for mRNA jabs, with companies like Moderna and BioNTech working to prove that their jabs can both outperform existing immunotherapies delivered on their own and provide value to cash-strapped health systems.

Cancer as a chronic disease

What makes the mRNA technology unique is that it can bring together 20 to 30 antigens — substances that trigger an immune response in the body. That's something that's fundamental to the potential success of the vaccine, as it means the immune system is shown a whole range of antigens that the tumor is expressing. “I can’t imagine how you can do that with any other technology,” said Burton.

Unlike Moderna’s COVID-19 vaccine which is “off the shelf” and not tailored to each individual patient, Moderna's personalized cancer vaccine is “supremely complex,” said Burton as “it’s really making a medicine for each individual person.”

The aim? For certain patients in the earlier stage of their disease, the hope is the treatment could potentially prevent the disease from progressing. In patients with more advanced disease, the desire is to extend their life, with their cancer becoming something of a chronic disease.

“We would hope that if we can really prove this, that it will be a fundamental shift in the way that — at least for certain kinds of cancer — we treat them and the clinical benefit could really be profound,” said Burton.

The other factor is side effects. Or rather, the relative lack of them compared to, say, chemotherapy drugs. “If you can get real clinical benefit with a really manageable safety profile, I really think could be transformational," said the chief medical officer. The topline results on Tuesday indicate that the adverse events were consistent with those reported in the phase 1 trial, which found the vaccine had an acceptable safety profile.

One of the major obstacles with immunotherapies is the price. There’s concern that the same will happen with mRNA cancer vaccines. While these kinds of decisions are some way off, it’s a concern that Sam Godfrey, senior research information manager at Cancer Research U.K. (CRUK), previously expressed concern about.

“If something's costing a million pounds per treatment for a personalized vaccine, and its effectiveness isn't much better than standard chemotherapy, which doesn't cost very much, you've got that decision about, actually, is this worth investing in?” said Godfrey earlier this year.

Moderna’s Burton said he had not yet been in discussions around price. But he argued that mRNA has “huge potential” to bring value to many people around the world. “We want to bring equitable health care to people all around the world,” he said. “So we want to work with governments and with payers to do that, but I think it's premature yet to really think about price.”