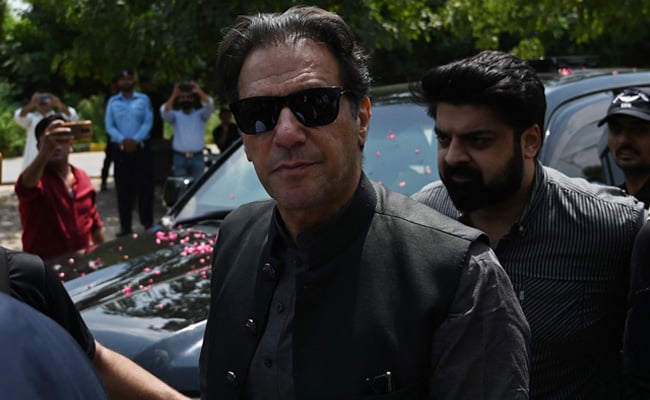 This comes after an arrest warrant was issued for Imran Khan in connection with his controversial remarks against Additional District and Sessions Judge (ADSJ) Zeba Chaudhry and other officials at an August 20 public rally.
The Islamabad High Court on Sunday approved the pre-arrest bail of former Pakistan Prime Minister Imran Khan and directed him to appear before the court concerned before October 7 in a contempt case, media reports said.

This comes after an arrest warrant was issued for the former premier in connection with his controversial remarks against Additional District and Sessions Judge (ADSJ) Zeba Chaudhry and other officials at an August 20 public rally.

Protesting the arrest warrant which was issued on Friday by Senior Civil Judge Rana Mujahid Rahim Pakistan Tehreek-e-Insaf (PTI)workers gathered on Banigala to thwart any attempts of the arrest. The workers warned that if Imran Khan is arrested it will be considered as crossing a "red line," reported Dawn.

The pre-arrest bail was given to Imran Khan after he filed a petition with the Islamabad High Court on Sunday through his counsel Babar Awan. In the plea, Imran said that a terrorism case was initially filed against him, however, he added that the charges were later struck down by the high court and the case was transferred.

He further accused the coalition government led by Prime Minister Shehbaz Sharif of filing a false case against him. Calling the government "corrupt", Imran Khan said that all of this was only to repudiate the peaceful demonstrations.

Taking up the petition filed by Imran Khan, Justice Mohsin Akhtar Kayani barred Islamabad police from arresting Imran and the court approved Imran's bail against the submission of surety bonds worth ₹ 10,000 further directing him to appear before the court concerned before Friday.

While speaking with the media outside the court, Imran Khan's counsel Awan said the IHC had granted the PTI chief "pre-arrest transitory protective bail", adding "we will turn up at the lower court before Oct 7." "Warrants are issued to ensure the appearance of suspects before courts," the spokesman stated.

The Express Tribune reported citing the affidavit said that Imran Khan assured the court that he would never do anything in future that would hurt the dignity of any court and the judiciary, especially the lower judiciary.

Notably, the magistrate of Islamabad's Margalla Police Station issued the warrant in the case registered on August 20 against the PTI chief for threatening Additional District and Sessions judge Zeba Chaudhry.

At a rally at the F-9 park in Islamabad, the PTI chair had warned that he would "not spare" Islamabad's inspector-general, deputy inspector general, and female magistrate, vowing to file cases against them for allegedly torturing PTI leader Shahbaz Gill.

"We will not spare the IG and DIG," he said while addressing the rally. The former Prime Minister called out Additional District and Sessions Judge Chaudhry, who had approved Gill's two-day physical remand at the request of the capital police, and said she, too, should prepare herself as the case will also be registered against her, reported Geo News.