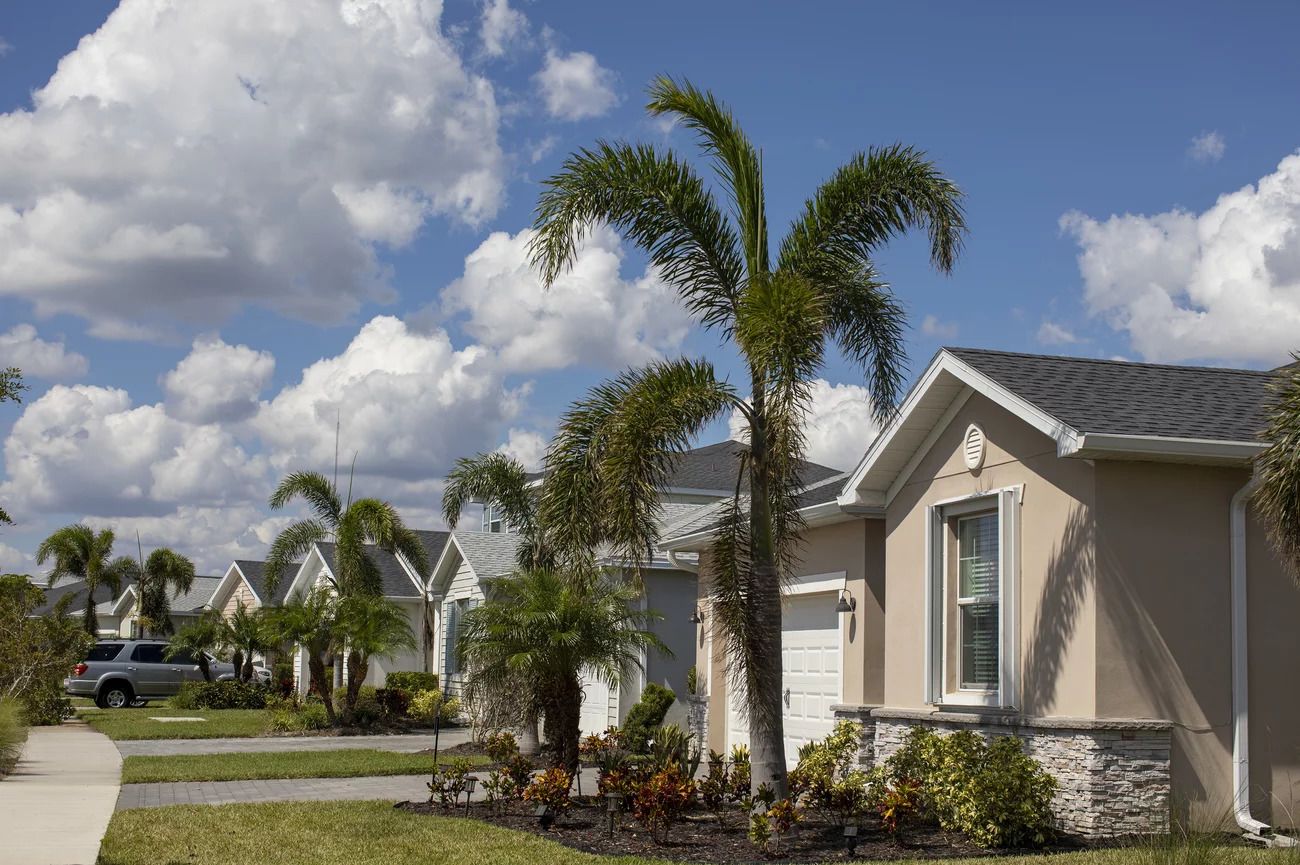 Like many others in Southwest Florida, Mark Wilkerson seemingly gambled his life by choosing to shelter at home rather than evacuate when Hurricane Ian crashed ashore last week as a Category 4 storm.

But it wasn't just luck that saved Wilkerson and his wife, Rhonda, or prevented damage to their well-appointed one-story house. You might say that it was all by design.

In 2018, Wilkerson became one of the first 100 residents of Babcock Ranch — an innovative community north of Fort Myers where homes are built to withstand the worst that Mother Nature can throw at them without being flooded out or losing electricity, water or the internet.

The community is located 30 miles inland to avoid coastal storm surges. Power lines to homes are all run underground, where they are shielded from high winds. Giant retaining ponds surround the development to protect houses from flooding. As a backup, streets are designed to absorb floodwaters and spare the houses. 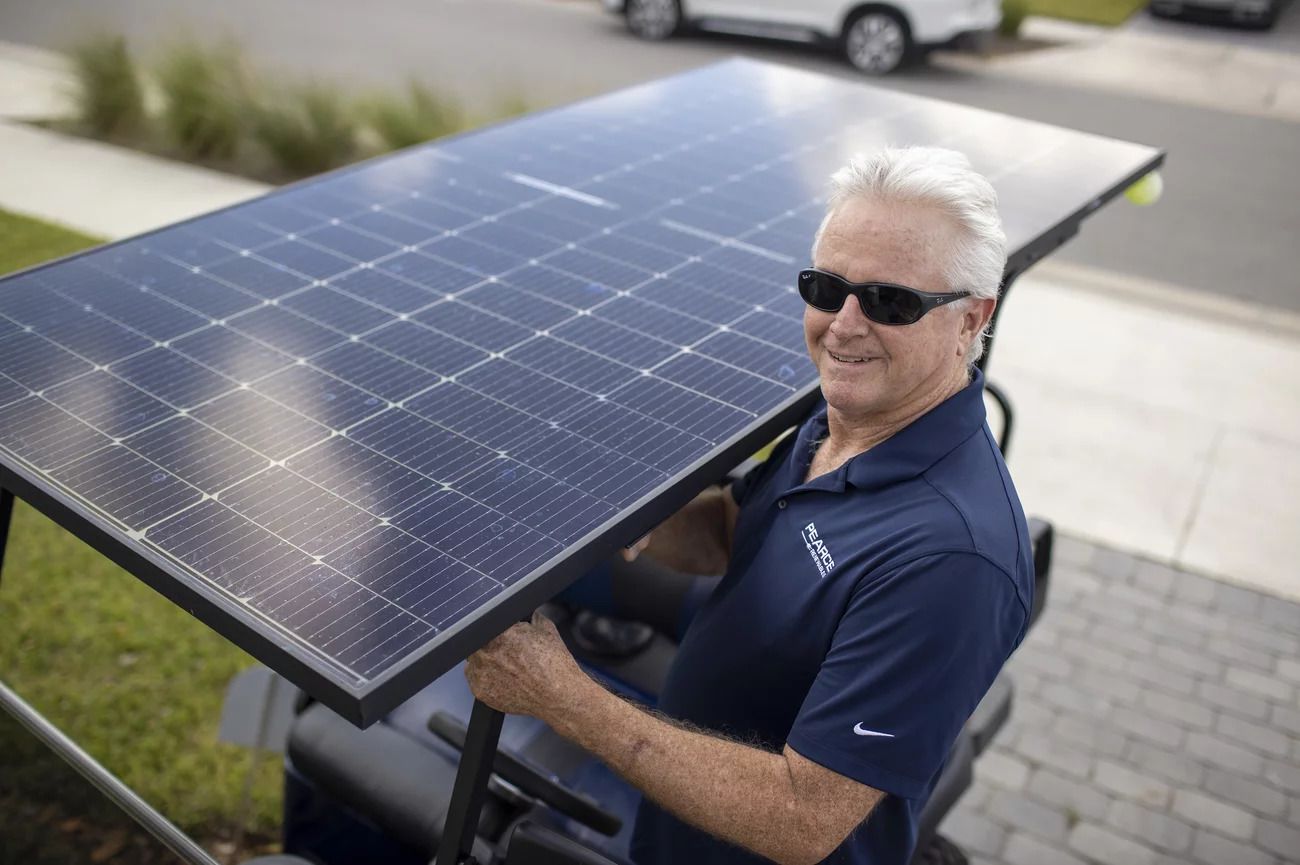 Mark Wilkerson with his solar-powered golf cart. He was one of the first 100 people to move into Babcock Ranch.

Wilkerson says he and his wife moved here from Illinois. "We'd almost been ready to build north of Tampa, on the Gulf," he says. "And then the last hurricane came through and reminded me that ... I want to be in a place where I don't have to evacuate."

Most residents chose to ride out the storm at home

So when the storm hit, Wilkerson and his wife stayed put, as did most other residents here. Although the community didn't experience the hurricane at its most intense, Wilkerson says they felt 100-mph winds. At one point, the lights in his house flickered but "lo and behold, we never lost power."

In fact, his house didn't even lose a shingle. That's the basic story of Babcock Ranch, post-Ian: Aside from a traffic light at the development's main entrance that's no longer there, a few street signs lying on the ground and some knocked-over palm trees, you'd hardly know that a hurricane came through.

Unfortunately, not so for many of the surrounding communities, where damaged structures and power outages have not been uncommon. 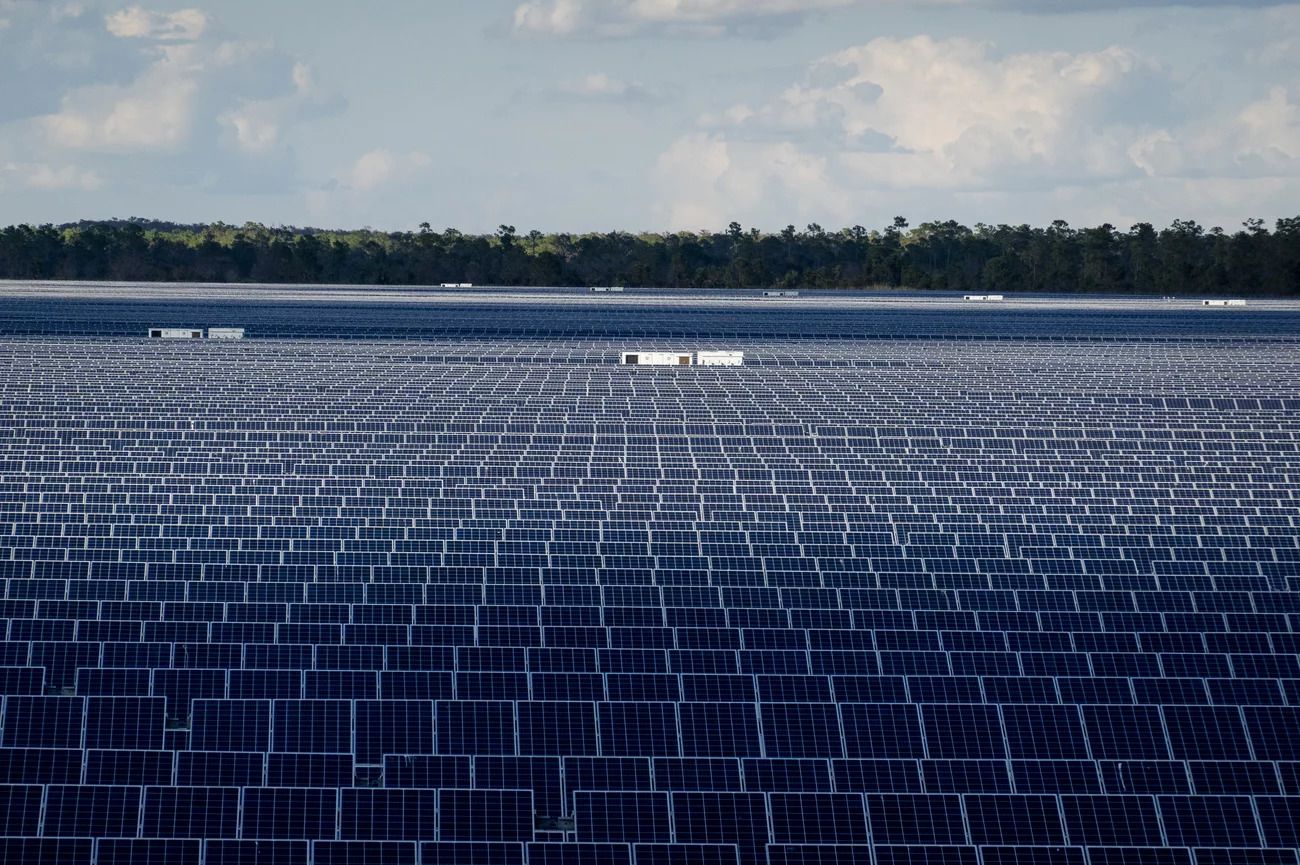 This 870-acre solar array, with 650,000 individual panels, powers Babcock Ranch during the day.

Wilkerson has worked in the solar industry since the 1980s, and one of the things that drew him to Babcock Ranch is its innovative use of solar energy: 870 acres of land owned by the development sport 650,000 photovoltaic panels, operated by Florida Power & Light.

The solar array powers the whole community — and then some. It can supply 30,000 homes. Babcock Ranch has only about 5,000 residents, though. The excess goes back into the grid and is used to power surrounding communities. At night and on cloudy days, a natural gas generator kicks in to fill the gap.

Developers aim for a strong and sustainable community

Babcock Ranch is the brainchild of Syd Kitson, a 64-year-old former professional football player who made his name in the 1980s with the Green Bay Packers. He went on to found a real estate development company, Kitson & Partners, and Babcock Ranch is one of firm's showcase projects.

Jennifer Languell is a sustainability engineer who helped design Babcock Ranch, and she lives here too. "We felt you could develop and improve land, not just develop in a traditional way where people think you are destroying the land."

"The things that we do, you don't see. The strength of the buildings, or the infrastructure that deals with stormwater, or the utilities. You don't see that stuff," she says. "Which is good, because most people don't need or want to think about it." 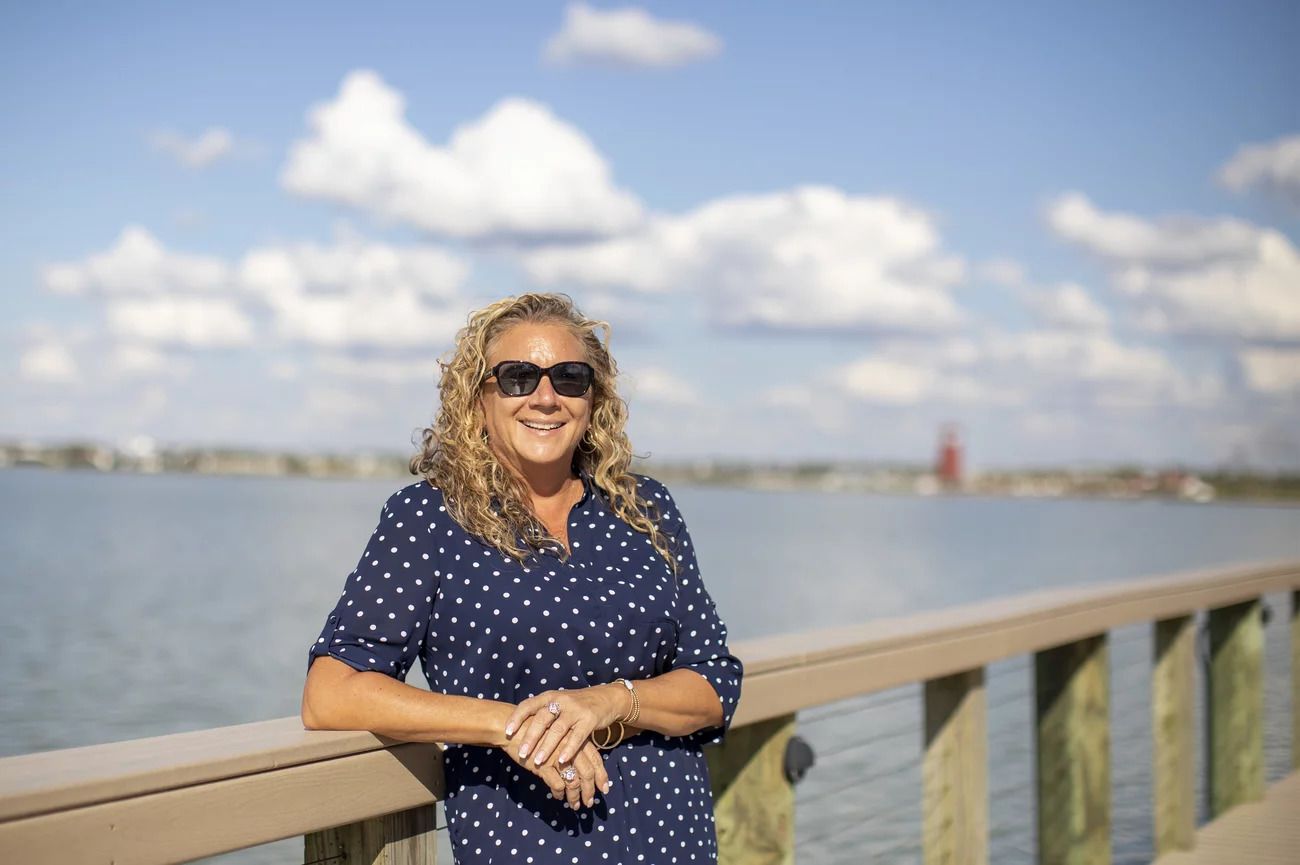 Jennifer Languell is a green-building and sustainable-development engineer who helped design Babcock Ranch.

As confident as Languell is of the community's durability, even she was a little unnerved by the storm's sheer strength. "I can definitely tell you that I pulled up my construction drawings and I verified the wind speed," she says.

Their good fortune pays dividends for others in need

Admittedly, Babcock Ranch has a slightly insular feel to it. But partly because residents were spared the full wrath of the hurricane, they have been able to reach out and help those in need.

A community center here was designed to double as a reinforced storm shelter. Everyone staying there right now has come in from other hard-hit communities. Babcock Ranch residents have been fielding requests on social media and shuttling in supplies. 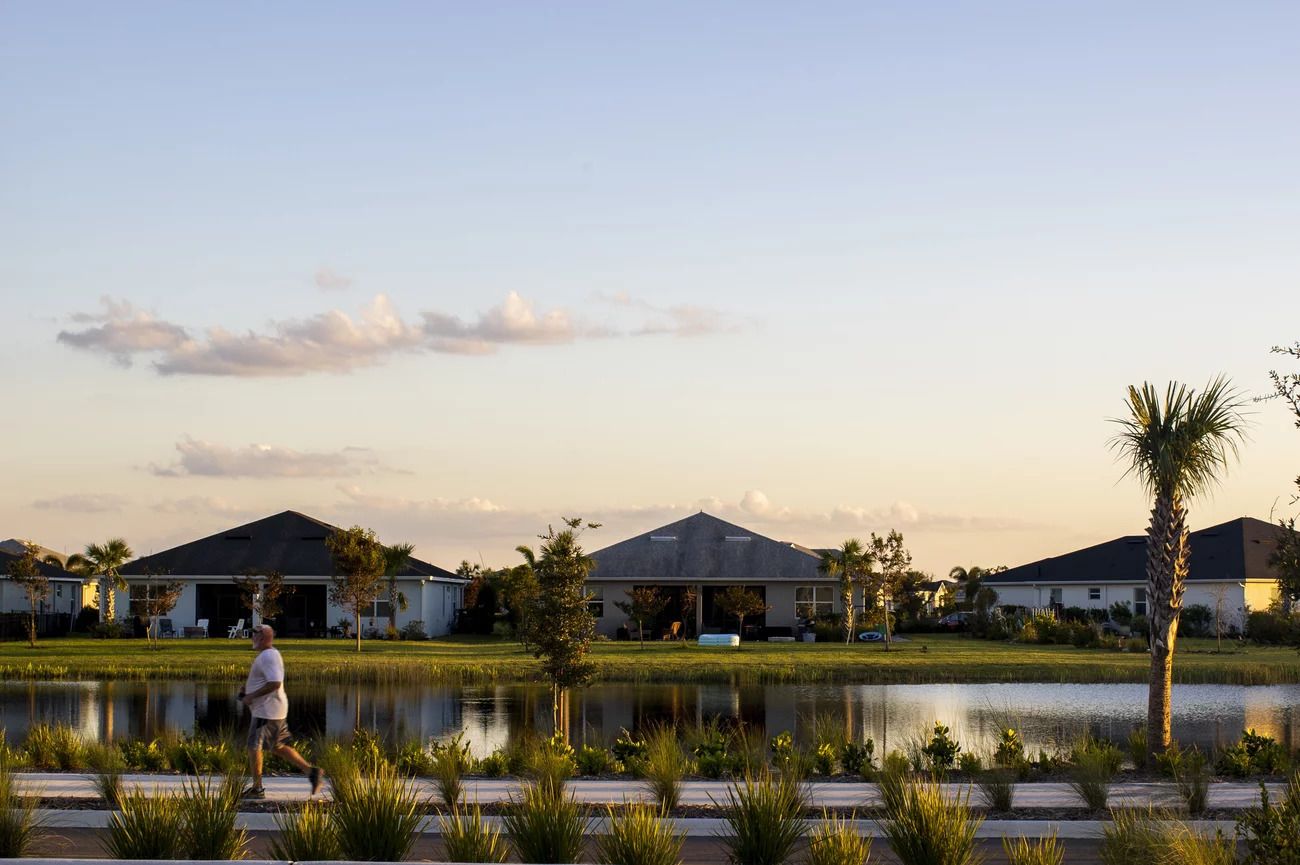 Judith Schrag, 70, who uses a walker, is sitting out front of the shelter smoking a cigarette. She arrived at the Babcock Ranch shelter a few days ago
after her Port Charlotte apartment was flooded out.

The community has been "absolutely phenomenal in terms of donations," Schrag says. "They are what have helped to keep this place going." 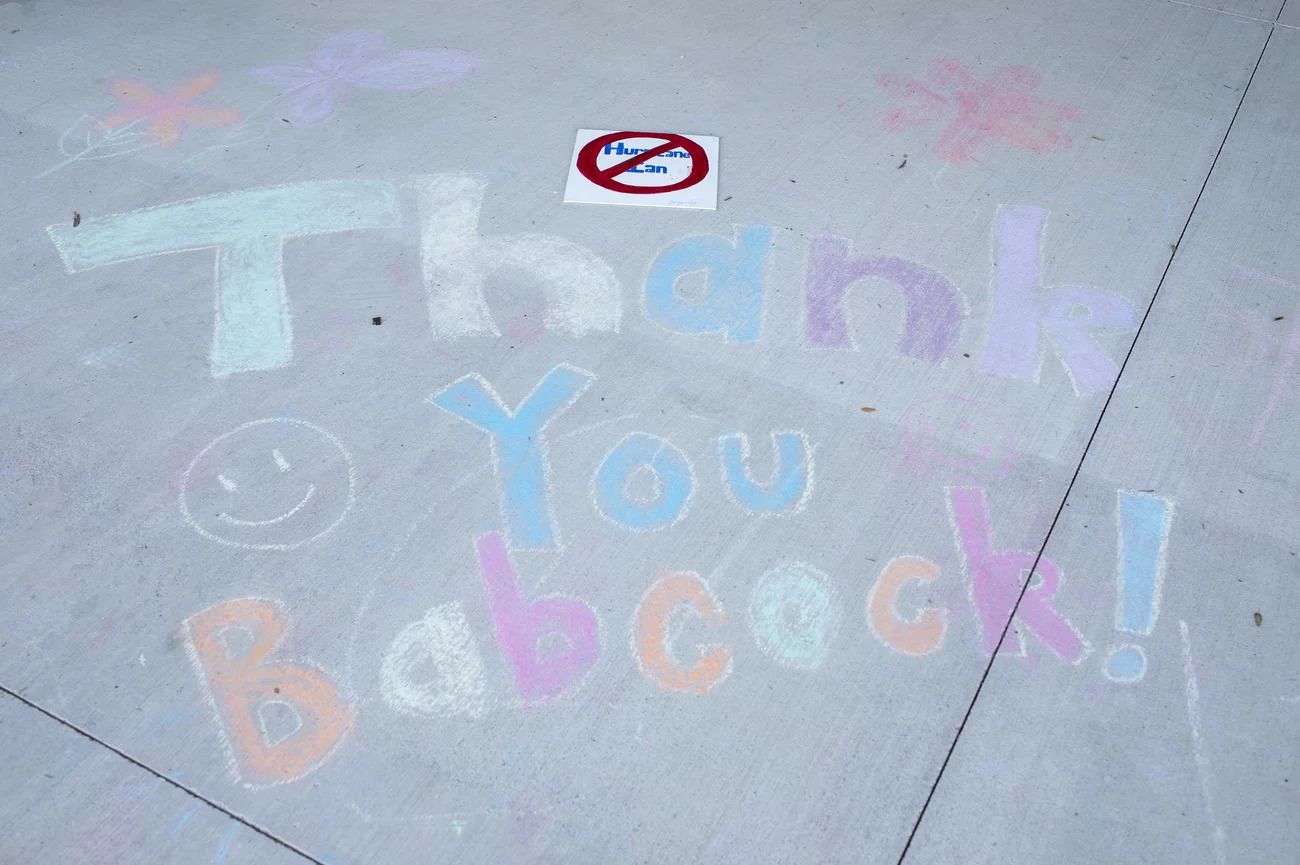 Messages written by kids outside the field house and Babcock Ranch community center, which doubles as a hurricane shelter.

Hurricane Ian was a big test for this community, where houses start at around $250,000. Languell says the storm provided "proof of concept" for the community's design. The developers of Babcock Ranch welcome imitators, she adds. Communities elsewhere in the U.S. might benefit from what has been learned here.

"We don't want to brag by any stretch of the imagination, because you do that, and the next thing you know, you get hit by a Category 5 and something doesn't work as well," she says.