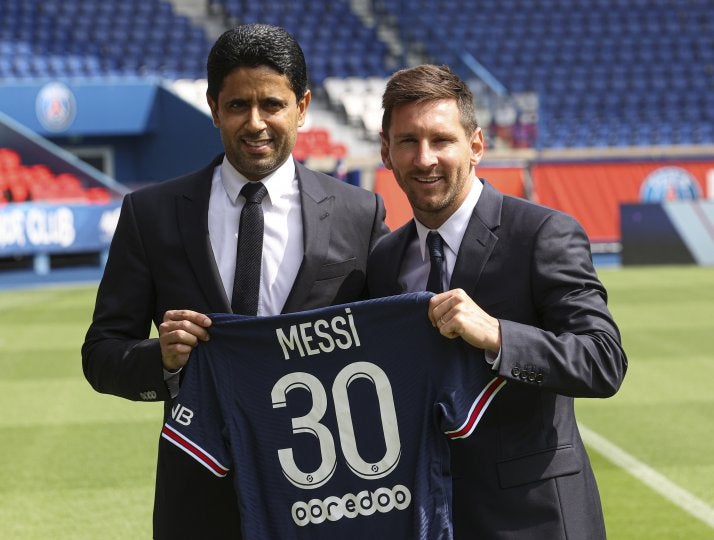 No, Piers Morgan, Lionel Messi isn’t about to sell enough shirts to cover his salary

There is a false confidence that men – and it is almost always men – are imbued with when they start talking about football. You see it in pubs and on fan forums. The conversation quickens and reverts to clichés. Endless sentences start with “Of course, you know” and tail off into nothingness. Chat about football is the great enabler of tedious platitudes passed off as genius.
Piers Morgan tweeted on Tuesday about the signing of Lionel Messi, perhaps the world’s greatest footballer, who has been bought by Paris Saint-Germain from Barcelona for a reported €35m a year. Messi had just been unveiled as the club’s latest signing, and Paris Saint-Germain – backed by Qatar Sports Investments – had started selling shirts emblazoned with the player’s name and number.

“PSG will get their Messi money back in shirt sales in six months,” Morgan wrote. “Great business.” His friend Mark Austin, a Sky News presenter, also heralded the signing as a good business decision. “PSG will soon get their dosh back,” he confidently tweeted.

Except they won’t, and never will. The idea that multi-million pound or euro investments can be recouped through the sale of overpriced jerseys is one of football’s most intractable and unlikely myths. Its persistence reveals a lot about the way we think and talk about the national game.

“To give you some context, most football shirt deals, 85 to 90 per cent will go to the manufacturer,” said Chris Lepkowski, a sports journalism lecturer at Birmingham City University. Those manufacturers are a small coterie of some of sports apparel’s biggest names, such as Nike, Adidas or Puma.

The manufacturer/club split isn’t a flat rate across the entirety of football, however. Some clubs have managed to wangle slightly more generous deals. “Bayern Munich have a big link in with Adidas which helps them,” said Lepkowski, as do Liverpool, who signed a £30 million a year deal with Nike in 2020 that reportedly gives them 20 per cent of each £80 sale. “But on the whole, you’re looking at 10 to 15 per cent,” Lepkowski added.

Lepkowski has done the sums on the back of an envelope – which, to his credit, is probably more than many people confidently tweeting about the business prowess of Paris Saint-Germain have done – and managed to figure out how many replica shirts would need to be sold by the French club to recoup the cost of buying one of the world’s most recognisable players.

“PSG, I believe, average about 750,000 shirt sales a year, which is good,” he said. “They would need, in three years, to sell 18 million shirts to cover the cost, and that’s only from the shirt sales... You’re dealing with what is effectively one of football’s big myths.”

The reason the myth persists is largely to do with the gulf between the realities of modern-day football and how fans in the stadium and at the turnstiles interact with it. “A lot of it is disinformation or failure to understand the way football operates – the mechanics and finance in football,” said Lepkowski. Football has become big business, with non-transparent financial structures that the average fan takes little time to try and learn.

“For instance, you’ll see people talking about free transfers or net spend on transfers,” said Lepkowski. “Neither are relevant. You won’t get a free transfer in football. There are costs on top of any contract – a signing on-fee or a bigger fee going to the agent, and that player will be on bigger wages than he would be had he been under contract elsewhere.”

The other reason is the banality of most conversations around football. Football punditry is often mind-numbingly tedious, and provides little actual insight. That includes commentary from former players – who presumably know better – repeating the line because they have little constructive to add.

“They’ve worked in football, and they push that myth,” said Lepkowski. Even Morgan is within the online football fan orbit as a known celebrity Arsenal supporter. “People do associate him with being a big football fan,” Lepkowski added. “When people like that peddle comments like that, it doesn’t help.”

And yet, when the next big player to switch clubs decides to move to a new team, the same tired line will undoubtedly appear. But remember, said Lepkowski: “You cannot physically sell that number of shirts to get that money back. It’s wishful thinking. The notion that 18 million people will all, from somewhere, decide to buy a PSG shirt is extremely unrealistic. It’s not going to happen.”