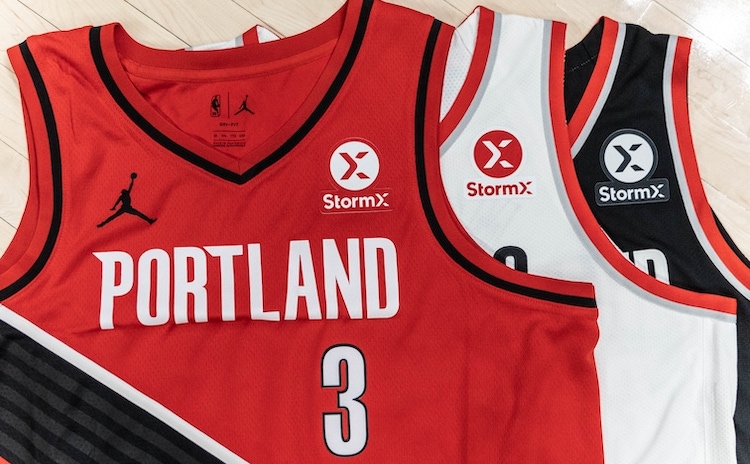 Professional sports teams, leagues, and famous athletes & crypto-partnership have been all over the news lately. Early this month, the National Basketball Association’s (NBA) Portland Trail Blazers announced the professional basketball team has partnered with the cashback blockchain company called Stormx.

The NBA’s Trail Blazers announced earlier this week that the NBA team has entered a deal with the blockchain company Stormx. Founded in 2015, the Stormx is a crypto cashback provider that also has its own native token called STMX. According to the Trail Blazers and the NBA’s own publication, hosted on nba.com, the deal between Stormx and Portland team is a “never-before-seen partnership.”

Stormx will be the Portland team’s first International Rights Partner that is meant to “engage fans around the globe.” the crypto firm will have the rights to conduct team-identified marketing and other forms of activities internationally.

Also, the Stormx logo will be featured on the team’s uniform as well, according to the announcement. Chris McGowan, the president and CEO of the Portland Trail Blazers and Rose Quarter, said he looks forward to seeing the team sport “such a groundbreaking, revolutionary company on the front of our jerseys.”

“Stormx is a fresh, energetic company with Pacific Northwest roots that can educate and motivate Rip City around cryptocurrency and earning crypto cashback. I look forward to taking these next steps together as partners.”

Crypto agreement with major sports team like this one have been leaking into the cryptocurrency world more and more recently. Major League Baseball team Oakland A’s started accepting bitcoin for 2021 season passes this year and even revealed the ball club would hold the bitcoin obtained from ticket sales, instead of converting it to USD.

Back in March, a number of NBA team owners formed an NBA blockchain advisory committee for the American professional basketball league. The NBA blockchain committee is made up of owners of teams like the Nets, Mavs, Wizards, Celtics, Kings, and Jazz.

The digital currency firm FTX Trading Limited has been relentlessly partnering with players and professional sports leagues as well. FTX has managed to acquire the naming rights to the NBA’s Miami Heat Arena, partner with the MLB, and obtain a naming deal with esports giant TSM.

FTX has been busy. Just last week they announced a partnership with Brazilian model Gisele Bündchen and her spouse, the seven-time Super Bowl Champion Tom Brady. As far as the deal between the Portland Trail Blazers and Stormx, the two companies will also be launching non-fungible tokens (NFTs).

The Trail Blazers and Stormx plan to release the first NFT in mid-July and it will be based on the team’s acclaimed Gameday Poster Series.

“We’re honored to be the first crypto company to form a jersey sponsorship with not only a team of such high caliber, but also with a league of the same stature. Like the Trail Blazers namesake, we see ourselves as trail blazers in the drive for the mass adoption of crypto, by helping everyday people earn crypto while they shop.”