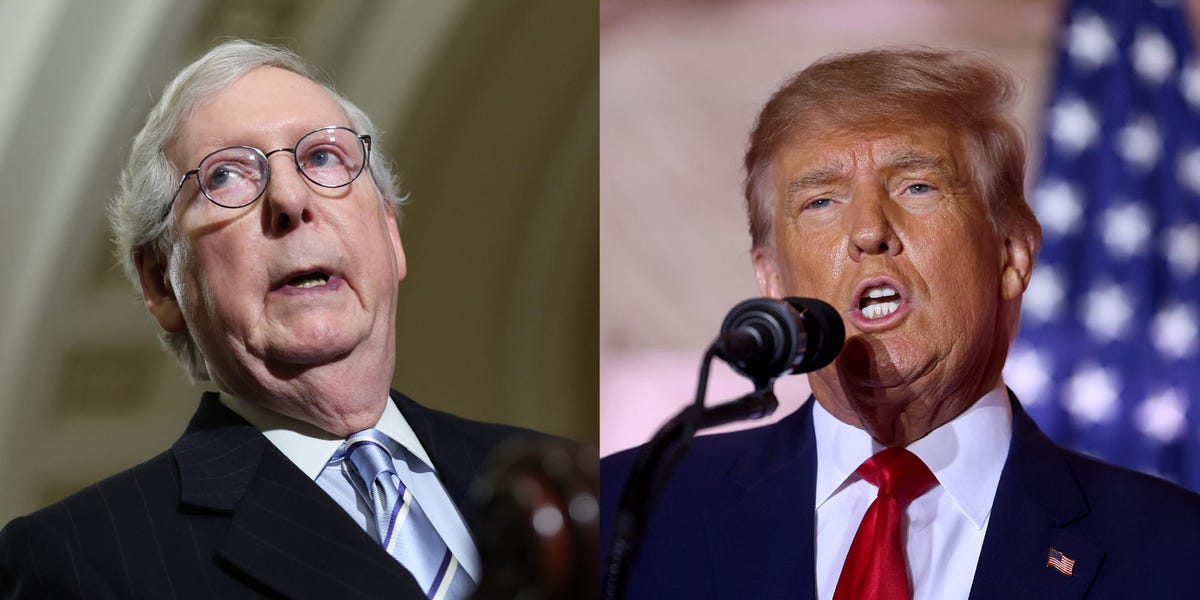 McConnell said his approach in 2022 was to "do the best you can with the cards you're dealt," which often meant going along with Trump's picks.
Senate Minority Leader Mitch McConnell blamed former President Donald Trump on Tuesday for the Republican Party's poor showing in Senate elections this year, saying that the influence of Trump's endorsements limited the ability of the party to choose better nominees.

"Our ability to control a primary outcome was quite limited in because the support of the former president proved to be very decisive in these primaries," he told reporters at his weekly press conference at the Capitol. "So my view was: do the best you can with the cards you're dealt."

"Hopefully in the next cycle, we'll have quality candidates everywhere and a better outcome," he added.

McConnell's comments suggest that he and other top Republicans essentially had to work with the candidates who Trump chose, rather than attempt to wage a proxy war against the former president.

The Kentucky Republican noted on Tuesday that he had intervened in Senate races in both Missouri and Alabama. In Missouri, Trump essentially declined to endorse a particular candidate, while he switched his support to McConnell-backed Katie Britt in Alabama after a falling out with his original endorsed candidate, Rep. Mo Brooks.

McConnell also reiterated previous comments he's made about the party's roster of Senate candidates, including that he "never said there was a red wave."

But it's the first time he's publicly tied Trump to the issue of "candidate quality," which McConnell first raised during comments at an event in Kentucky in August.

He again referenced the candidacies of Blake Masters in Arizona and Don Bolduc in New Hampshire, two candidates who denied the legitimacy of the 2020 election and won their primaries with Trump's support, only to easily lose to their Democratic opponents in November.

And he referenced Herschel Walker, another scandal-plagued candidate pushed by Trump who was defeated by Democratic Sen. Raphael Warnock of Georgia during a runoff election last week.

"Look at Arizona, look at New Hampshire, and a challenging situation in Georgia as well," he said on Tuesday.

"I do think we had an opportunity to relearn, one more time: you have to have quality candidates to win competitive Senate races," he added.

In 2022, not only did every incumbent Democratic senator win re-election — the first time that's happened with a Democrat in the White House since 1934 — but they also expanded their majority in the Senate to 51 votes.

Spokespeople for Trump's 2024 presidential campaign did not immediately respond to Insider's request for comment.
#Donald Trump