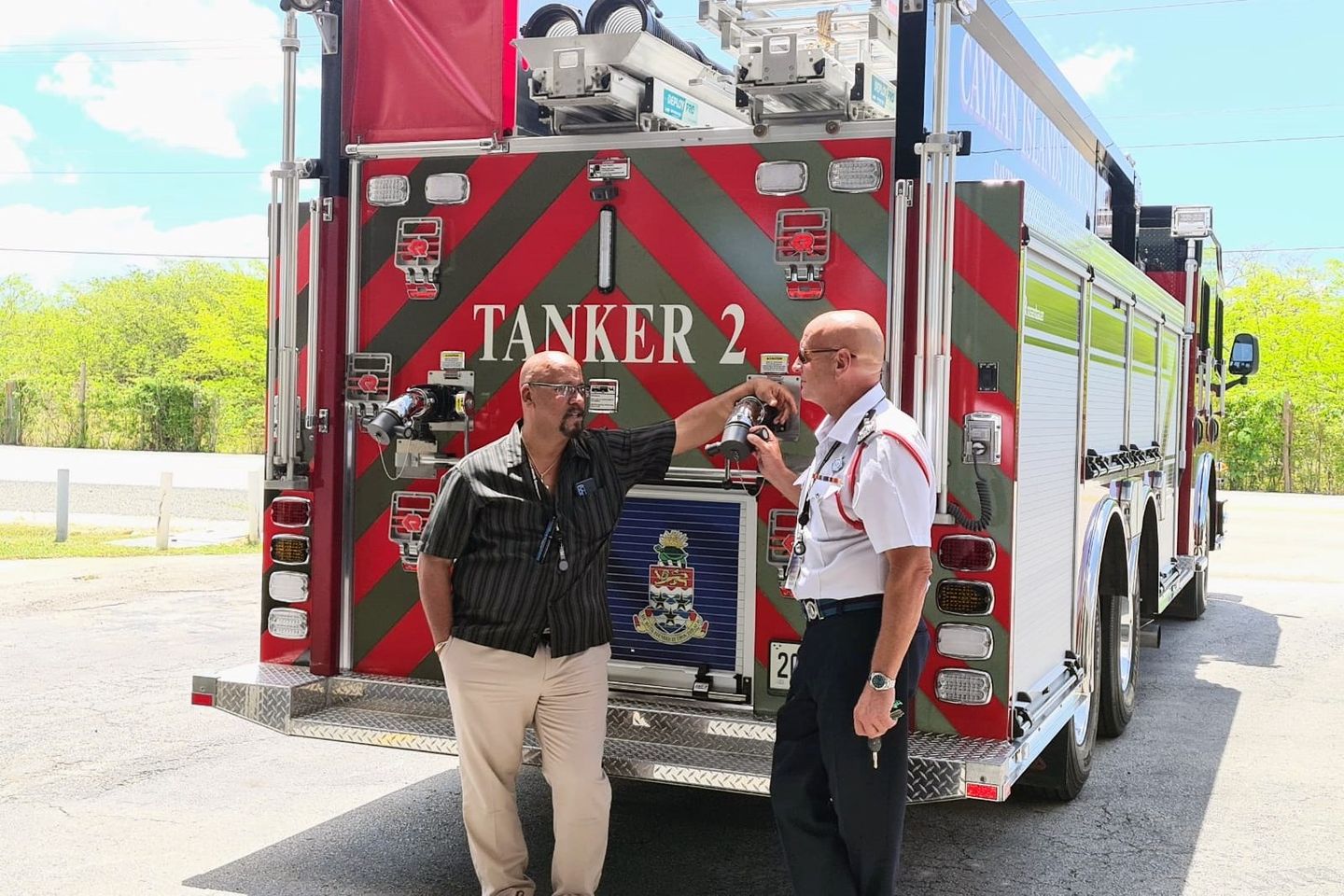 The team’s first stop of the day was Frank Sound Fire Station, where the Minister learned about the fire and rescue rapid intervention vehicle (RIV), which allows a quicker and more versatile response capability on local roads, than tankers and ladder trucks. As a result vehicles and crews are able to arrive at incidents more quickly, with sufficient fire and rescue equipment to deploy safely.

At Central Fire Station in George Town, which is home to the fire services aerodrome team among others, Mr Bush got a close-up look at two OshKosh Strikers that provide state-of-the-art aviation fire and rescue capability at Owen Roberts International Airport. Another Striker is stationed at the Charles Kirkconnell International Airport on Cayman Brac, and CIFS has another two on order.

Cayman Islands Fire Service (CIFS) leaders also highlighted maritime search and rescue capability, noting that their existing rigid-hull inflatable boat (RHIB) and jet-ski allow for a response to incidents within two miles of shore. The Fire Service is currently preparing to receive a new vessel that will bolster capability for inshore SAR activities.

The Ministry and CIFS management team also discussed training and talent development programmes as well as projects to enhance the fleet and improve infrastructure.

Later that afternoon the tour concluded at West Bay Fire Station, with a briefing on the tanker truck. The tanker’s capabilities include: high pressure hose reels, improved pumping capabilities and a revised locker layout for a quick and safe deployment of hose and equipment by firefighters

Minister Bush praised the firefighters for their selfless dedication to community service.

“CIFS has been on a journey of continuous improvement and the results are clear. At the same time I was very pleased to learn that these efforts will carry on, with increased focus on strengthening stakeholder relationships, as well as always ongoing assessment of evolving risks at the landfill, at the airport, and in other areas.”, the Minister remarked.

Mr Bush went on to say he had been impressed by plans to develop the Cayman Islands as a centre of excellence that provides opportunities for continuous learning, education and professional development, and that the Home Affairs Ministry was fully supportive of these objectives.

“One of my key goals is to identify the next Caymanian Chief Fire Officer through a rigorous, fair, and transparent programme of assessments and professional support. I welcome the support of our ministry in achieving that goal”, Chief Walker remarked.

The Home Affairs Ministry expects to tour services on Cayman Brac in person in the near future.