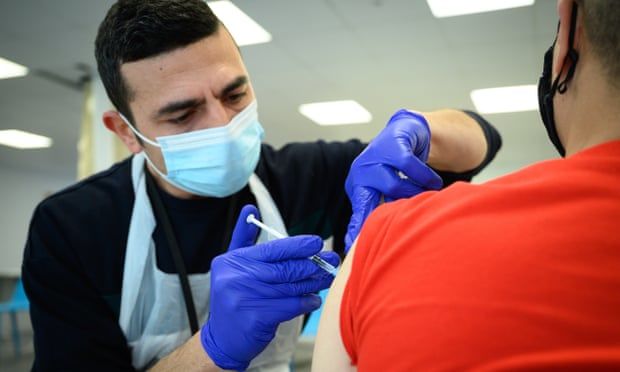 Exclusive: boosters to be offered five months after second dose as part of major change to vaccination rollout programme

The government is to allow people to have their Covid booster jab after five months, a month sooner than under the current policy, in an effort to help stop the NHS becoming overwhelmed this winter.

This major change to the vaccination programme could see ministers flouting the advice of the Joint Committee on Vaccination and Immunisation, which recommends that people wait until six months after their second dose before having their top-up in order to maximise protection.

It is unclear whether the policy would apply only in England or across the four home nations.

It means millions of Britons will be able to have their booster sooner than expected to reduce the risk of hospitals failing to cope with large numbers of people becoming seriously ill with Covid during the winter months, when they always come under intense pressure.

Anyone across the UK in cohorts one to nine – the priority groups that include frontline health and social care workers, millions with underlying health problems and all adults over 50 – will be able to book their extra vaccine once the change is formally announced.

Fears that waning immunity from the impact of second doses wearing off could fuel a surge in Covid hospital admissions in the coming months have prompted ministers to act.

Almost 12m booster doses have already been given. But there has been persistent criticism that the delivery of what ministers, doctors and scientists say are vital top-up shots has gone too slowly.

Key personnel across the NHS who are centrally involved in the vaccine programme have been told that Sajid Javid, the health secretary, has already approved shortening the gap. One source said that he last week authorised an amendment to the national protocol, the legal framework governing the programme, in order to implement the change.

Jeremy Hunt, the former health secretary who chairs the Commons health select committee, last month challenged the JCVI’s stance and urged the government to cut the delay between second and third shots. Hunt said: “This decision that’s been made that you can’t have your booster jab until six months after you had your second jab – how hard and fast should that rule be?

“Does it really matter, when it’s only nine weeks till the Christmas holidays, if someone has a booster jab after five months?”

One source with knowledge of the switch in approach said: “Yes, the JCVI’s policy hasn’t changed. They recommend six months. But that’s guidance. We don’t have to follow that. 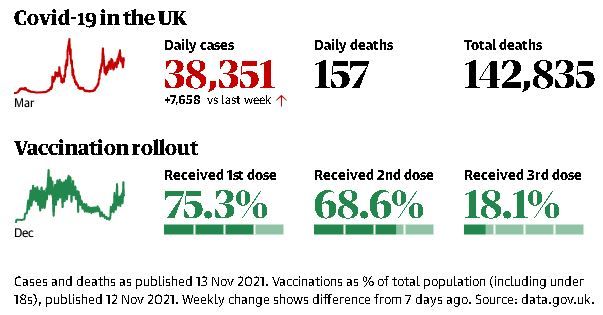 “The aim is to ensure that there is as high a level of immunity as possible going into the winter. The primary thing is to protect the population. Giving it at five months means that someone’s immune response from it is just as strong as if they’d got it at six months.”

Evidence from the government’s Scientific Advisory Group for Emergencies (Sage) shows that protection against someone getting symptomatic Covid falls from 65% in the first three months after the second dose down to 45% after six months for the Oxford/AstraZeneca vaccine, and from 90% to 65% for the Pfizer/BioNTech jab.

The JCVI originally approved a booster programme on 14 September, which began soon after. Vaccinators should use the Pfizer/BioNTech vaccine as far as possible for third shots, because that “provides a strong booster response”, it said.

However, it was adamant that “the booster vaccine is offered no earlier than six months after completion of the [two-dose] primary vaccine course”. Ministers have followed that advice until now.

The JCVI relaxed the six-month rule a little last month when it said that some groups at the highest risk of becoming very unwell if they caught Covid, including care home residents and those undergoing immunosuppressive treatment, could have their top-up jab a month sooner.

Paul Hunter, a professor of medicine at the university of East Anglia, said switching to a five-month gap could help limit Covid’s damage. “I am not aware of any evidence that has compared the effectiveness of five-month versus six-month booster jabs. I would guess that there wouldn’t be that much difference.

“So there could indeed be benefits in reducing the incidence of severe disease and death that bit more rapidly this winter by bringing this to all people being offered a booster,” he said.

But Hunter added that the government’s greater priority should be improving the uptake of booster jabs among at-risk groups, who have already been offered their top-up. “The most important thing is to get the booster into more people in the most vulnerable groups, [those] who should already have been offered the booster but [have] not yet taken it up.

“In England there are still over a fifth of people over 70 who had their second dose more than six months ago [but] who have not yet had their booster, though that is improving each day.”

The Department of Health and Social Care denied that any changes to the booster rules were imminent. A spokesperson said: “We continue to follow the advice from the independent Joint Committee on Vaccination and Immunisation (JCVI) who, after a rigorous review of the latest evidence, advised all eligible people should get their booster dose six months after their second dose.”

“There are currently no plans to reduce the interval. We urge everyone eligible to get their boosters as soon as they can to maintain their vital protection from the virus over the winter months.”