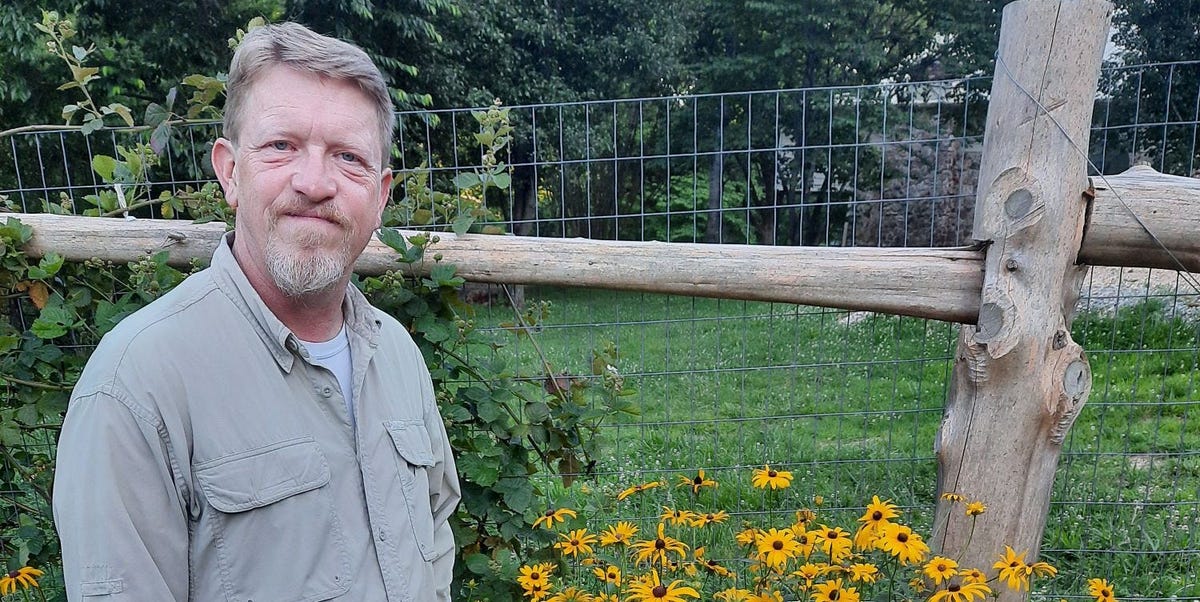 Meet a man with $47,000 in student debt who's been trapped in a student-loan repayment 'bureaucracy nightmare' for nearly 3 decades without the debt cancellation he was promised

Jason Harmon qualified for student-loan forgiveness 2 years ago — but his paperwork is missing, and he's stuck in repayment for at least 9 more years.
In 1995, Jason Harmon graduated from the University of Arkansas with $26,000 in student debt, and he enrolled in a 25-year income-driven repayment plan.

Twenty-seven years later, Harmon now holds a $47,000 student-loan balance and still has an estimated nine more years of repayment, and that's thanks to accrued interest on top of yearslong servicer mismanagement of student-loan repayment plans based on income. On top of it all, his wife — who he married in 2004 — also holds a debt load of nearly $200,000.

"We are literally crushed by this debt," Harmon, 53, told Insider. "This loan's never going away. We could have no vehicles, we could have a rental instead of a mortgage, we could cut most things out of our life, and we still wouldn't touch the debt we have."

Harmon said he had every intention of paying off the debt that he borrowed, but at the time, the repayment plan established under President Bill Clinton — known as the income-contingent repayment plan — seemed like the best option for him because he was not making sufficient income as a journalist. Then, the 2008 recession hit and he lost his journalism job, and Harmon said he has been unable to maintain meaningful employment since then. He now works as a fishing guide in Arkansas and brings in only a small income.

Despite the employment hurdles, Harmon said he remained consistent on his monthly student-loan payments. But issues arose when his loans were transferred to a new student-loan company and progress that he made toward his payments were lost, pushing back his repayment timeline by nearly a decade.

He said he just wanted the loan forgiveness he signed up for so he and his wife — whose income they mainly rely on — wouldn't have monthly bills hanging over their heads for the foreseeable future.

"I don't think I'm ever going to pay this debt off in my whole life," Harmon said. "And it's crippling psychologically in the sense that it's a physical manifestation of your dreams not working out. And I don't think the government should earn interest off the dreams of its citizens."

'I was in this bureaucracy nightmare'

Harmon thought the terms of the income-contingent plan he agreed to under Clinton were simple. He would send in paperwork once a year verifying his income, and he would make the monthly payments the Education Department calculated for him for 25 years, with loan forgiveness at the end.

But he couldn't have foreseen the challenges that arose in 2013, when his loans were transferred to the student-loan company MOHELA. After he was notified of the transfer, Harmon said, he was instructed to select a new version of the income-driven repayment plan he had been on for 18 years, and when he later contacted the company to ask about loan forgiveness it said some of his paperwork was missing, pushing him off track.

"Suddenly, I was in this bureaucracy nightmare where any question I had didn't go anywhere — any time I needed help it was a never-ending phone tree where I'm just being transferred from one person to another," Harmon said.

An NPR investigation from April delivered proof of paperwork issues with the types of plans people like Harmon were on. NPR obtained internal documents indicating that three student-loan companies — PHEAA, CornerStone, and MOHELA — weren't tracking payments borrowers made over the past two decades for their income-driven repayment plans.

And a student-loan worker who helped enroll borrowers in a 2007 version of the repayment plan previously described the paperwork to Insider as "overly" complicated.

'The government is not fulfilling its obligation'

US lawmakers are aware of failures with income-driven repayment plans. After NPR's investigation came out, Rep. Bobby Scott, the top Democrat on the House education committee, said the findings were "worse than we expected," and the ranking member of the committee, Rep. Virginia Foxx, later said the program "turned out to be a complete disaster and taxpayers are forced to foot the bill for these mistakes."

A report from the Government Accountability Office in April expanded on the plans' failures. It found that the department had approved just 157 loans for full forgiveness under income-driven repayment plans, with 7,700 more loans "potentially eligible" for forgiveness.

Following revelations of the plans' failures, the Education Department in April announced temporary reforms meant to bring 3.6 million borrowers who were on income-driven plans closer to relief. Additionally, along with announcing up to $20,000 in broad student-loan forgiveness for federal borrowers at the end of August, the Education Department also released plans for a new income-driven repayment plan that would lower borrowes' monthly payments.

While Harmon agrees these reforms are warranted, he said that they were long overdue — and that failures to address them had changed the trajectory of his life.

"I never wanted a free ride and was always willing to repay my original loan balance, but the government is not fulfilling its obligation," he said. "This debt is a trap that prevented us from having children or enjoying life together as a married couple for decades."