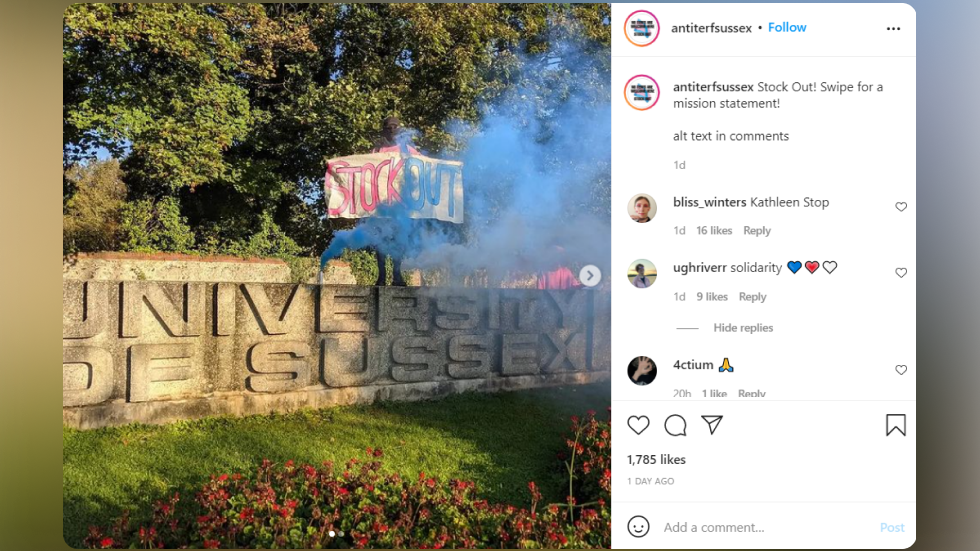 Activists from the LGBTQ community have demanded that Sussex University fire a prominent academic who promotes a “bastardized” version of “radical feminism” that “excludes and endangers trans people.”

A group calling themselves antiterfsussex – referencing the term ‘Terf’ [trans-exclusionary radical feminist] – have created a campaign, demanding that Sussex University sack philosophy professor Kathleen Stock, accusing her of being a transphobe.

“Stock is one of this wretched island’s most prominent transphobes, espousing a bastardized variation of ‘radical feminism’ that excludes and endangers trans people," the group wrote in their mission statement.

They add that the philosophy professor has spent years campaigning for the exclusion of trans people from "women’s only spaces” and denies trans and non-binary people the right to self-identify as any gender.

Labelling Stock a “bigot” and a “spiteful bootlicker,” the group claim that through tweets and articles, she has made her dislike of trans people evident. They even attacked her trusteeship of the “trans-exclusionary hate group” LGB Alliance.

"We've f****** had enough… Our demand is simple: fire Kathleen Stock. Until then, you’ll see us around."

The group further take aim at the “wretched island” they call Britain, describing it as a “colonial shit-hole” where people can profit from transphobia.

The LGBTQ activists have also published a photo of their protest on campus and released a list of 5,587 deleted tweets from Stock, some of which are allegedly transphobic.

Another shared image shows posters, stuck onto a wall, by the group at Falmer Station, near the campus. “Kathleen Stock makes trans students unsafe. Sussex still pays her,” one reads.

However, the reaction to their protest hasn’t been overly supportive. With #ShameOnSussexUni on British Twitter, many people declared their support for Stock and blasted the students involved in the activism, as well as the university itself. “Shame on Sussex University, what an embarrassment,” one person wrote, calling for the university to protect their academic freedom.

Another concurred, “Act swiftly. Women are watching out for her and hoping for her safety. Why aren’t you?” another Twitter user wrote, addressing Sussex University directly and blasting the “woman-hating” activists.

“This has got to stop @SussexUni… please stand up for a well-respected academic against these awful bullies. This is pure woman-hating,” one person chimed in, arguing that the university had a duty to respect academic freedom.

One commentator said the activists protest was a manifestation of “campus radicalisation, and terrorism.”

Some did support the movement, dismissing allegations of harassment or bullying against antiterfsussex. They claimed the activism was “the consequences of hate speech,” and that “Transphobia has no place in academia.”

The university is yet to comment on the activism and the demands that one of their most prominent academics is fired.

Stock has frequently spoken out on the topic of trans rights and feminism despite facing online abuse. She has previously noted that she has experienced a “hostile environment” at work because of her views, which upset some transgender people.

It’s not the first time a British academic institution has been embroiled in a row over gender rights. In 2020, Eton College sacked English teacher Will Knowland over a lesson on “toxic masculinity” in he hit out at radical feminism and claimed the male role as a “protector” benefits society as a whole – including women.