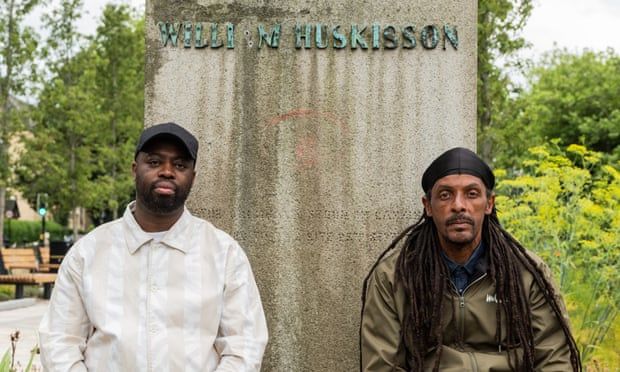 Work by Harold Offeh sheds light on pulling down of William Huskisson statue in aftermath of Toxteth riots
On a balmy summer night a group of young people tore down a statue because of its connections to slavery, tying a rope around its neck and yanking it from a plinth that still stands empty. This happened in Liverpool, not Bristol, and the year was 1982.

Now, an artist behind a new audio work that recalls the tearing down of the monument says he hopes it can shed light on a forgotten moment in race relations, which came almost 40 years before the removal of the Edward Colston statue.

The statue was of William Huskisson, a liberal Tory MP and financier, who is best remembered for being killed by George Stephenson’s Rocket at the opening of the Liverpool and Manchester railway in September 1830.

Huskisson, while an MP for Liverpool, also supported slaveowners and opposed the abolition of slavery after changing his position when he moved to the city where wealthy plantation owners were hugely influential.

It was his support that made the statue, commissioned by Huskisson’s widow, Eliza, a target in July 1982 when it was torn down from its plinth on Princes Avenue. The statue now sits in Dukes Terrace in the city.

The audio work by Harold Offeh retraces what happened on that night, as the youth worker Stephen Nze, a 17-year-old at the time the statue fell, was later found not guilty of criminal damage, explains the night’s events.

Nze says the tearing down of the statue, which was achieved by pulling it off its plinth using a stolen Ford Cortina, was spontaneous and came after a period of sporadic unrest in the months after the Toxteth riots.

“[In 1982] people were still getting picked up by the police and there was still harassment,” he says. “We were confined to our areas and stuff like that. It wasn’t good.”

The bronze statue, which was moved to Toxteth from outside the Custom House inthe centre of Liverpool in the 1950s, became a symbol of the establishment, which many black scousers saw as hostile in the aftermath of the riots. It is based on a statue made by the Victorian sculptor John Gibson which still stands in Pimlico in London.

“Liverpool merchants were filthy rich,” says Laurence Westgaph, who runs tours around the city’s monuments and discusses their connection to slavery. “Big Sugar was like big oil or big tobacco today – so politicians basically did as they were told and Huskisson became someone who defended the continuation of slavery.”

Nze says that a year on from the unrest in 1981, whichincluded several days of violence between police and protesters, the removal of the Huskisson statue was seen as a jubilant moment for locals who had become more radical after the events of 1981.

Offeh says he hopes the project can shed light on an important political moment for Liverpool and the rest of the UK. “For me, it’s very simple: it’s about people being aware of our history,” he says.

“We often turn to the United States to provide the live context of protests and resistance and rebellion, but it’s easy to forget that there are our own communities of colour that have resisted for hundreds of years.”

The plinth has remained empty, except when, in 2004, an artist placed an abstract sculpture there of the Native American activist and peace campaigner Leonard Peltier, who was convicted of the deaths of two FBI agents in 1976.

Offeh’s piece is part of the Statues Redressed project, in which several Liverpool statues are “redressed”, with artists including Peter Carney and Bob and Roberta Smith also taking part. All the statues will be presented in a special broadcast on Sky Arts in October.

“It took me back to 38 years ago,” he said. “When someone said Colston was the first statue to be pulled down and I automatically said, ‘Nah, I don’t think so – we pulled one down 38 years ago.’

“It was for similar reasons, only ours was different because it was a community that ripped that man down. It was our community.”