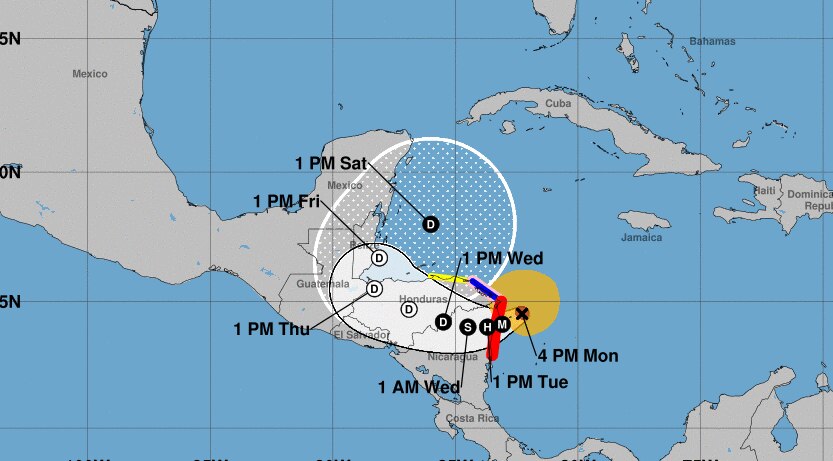 The powerful hurricane Eta strengthened this Monday to category 4 as it approached the Caribbean coasts of Nicaragua and Honduras, with threats of devastating rains in Central America, according to relief agencies of both countries and the National Hurricane Center (NHC) of the United States.
Its center was located about 225 km northeast of Bilwi (also known as Puerto Cabezas), in the North Caribbean of Nicaragua, according to the Miami-based hurricane center.

Eta, which is traveling at 15 km / h, is expected to make landfall early Tuesday in the North Caribbean of Nicaragua, inhabited by indigenous and Afro-descendant populations.

The Honduran Civil Protection System announced that the hurricane is located 120 km southeast of Cabo de Gracias a Dios, heading southwest to Puerto Cabezas in Nicaragua.

In Nicaragua, it was reported that residents of towns on the north coast are preparing for the impact of the hurricane. People are stocking up with basic necessities.

We have already managed to evacuate more than 3,000 families with the active participation of our army from Caribbean communities, such as Prinzapolka and the Miskitos Cays, said the vice president and official spokesperson, Rosario Murillo.

Earlier, the Nicaraguan government decreed a red alert before the imminent arrival of Eta. The same did Honduras.

Both Nicaragua and Honduras already have heavy rains in coastal communities in the Caribbean.

According to the digital media Noticias 4Visión, since Hurricane Eta was in category 3, they were already leaving destruction and floods in various sectors of the Honduran and Nicaraguan country.

The NHC warned that catastrophic winds, flash floods and landslides are expected in parts of Central America.