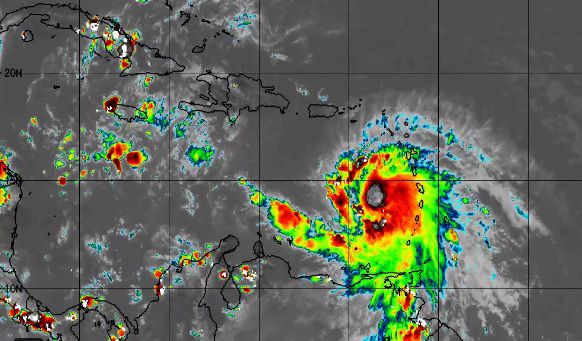 Hurricane Elsa, first of the Atlantic season, threatens the Caribbean

Elsa, the first hurricane of the 2021 Atlantic storm season, is approaching the Caribbean and heading toward Florida as extreme weather continues to hit the Northern Hemisphere.
The hurricane was just north of St. Vincent, heading toward Haiti and Cuba, the U.S. National Hurricane Center said in an advisory on Friday. The storm had maximum sustained winds 120 kilometers per hour.

Elsa, moving at 29 mph, is on track to make landfall in Florida on Tuesday and could veer into the Gulf of Mexico, putting oil rigs at risk.However, the storm may weaken and change course as advancing on Cuba.

"There is a risk of storm surge, wind and rain impacts in the Florida Keys and parts of the Peninsula early next week," Jack Beven, a senior hurricane specialist at the National Hurricane Center, said in an advisory.

"However, the forecast uncertainty remains higher than usual due to Elsa's possible interaction with the Greater Antilles this weekend," he added.

Elsa is the fifth named Atlantic storm in what meteorologists hope will be an unusually busy season.

It is the first time in modern records that the Atlantic basin produces so many storms at the beginning of the year.

These come after a record heat wave that continues to affect Canada and the northwestern United States. In addition to the extreme temperatures that have suffocated China, Eastern Europe and elsewhere.