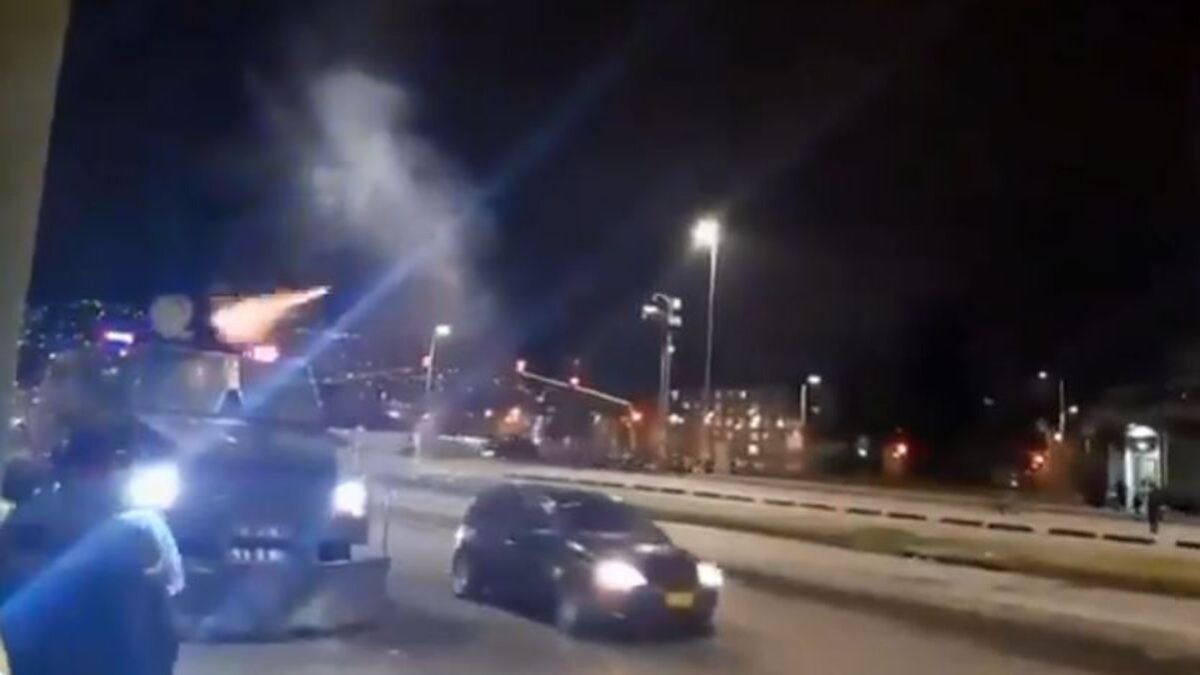 HRW: Colombian police launch projectiles against the demonstrators from tanks

The HWR asked the Ministry of Defense to "give explanations" on the use of this weapon against the demonstrations in Bogotá.
The police have launched "multiple projectiles" from tanks at people who have been protesting in Colombia for nine days and who, precisely, are claiming against the police brutality that, according to the NGO Temblores, has left 37 fatalities, Human Rights Watch denounced this Thursday ( HRW ).

"With eyewitnesses and digital verification of videos we have corroborated the use of tanks with multiple projectile launchers aimed at protesters. It is a dangerous and indiscriminate weapon," said the director for the Americas of HRW, José Miguel Vivanco, in a message published in their social networks.

Vivanco, who asked the Colombian Defense Ministry to "provide explanations" on the use of this weapon, published a video in which it is seen how police officers launch projectiles from a tank at a group of protesters in Bogotá.

It is the response to several videos that circulated earlier this week, and which raised doubts about its origin, as projectiles were seen being launched in Bogotá as if the demonstrations were a scene of war.

On the other hand, the director for the Americas of HRW assured on Wednesday that that NGO has received 31 complaints about deaths during the demonstrations , of which it has been able to corroborate 11, the same number of fatalities that the Colombian Prosecutor's Office has confirmed.

"The protests in recent years in Colombia raise enormous doubts about whether the Police - and especially the Esmad (Mobile Anti-Riot Squad) - are capable of fully respecting human rights in these circumstances," added Vivanco from HRW. in another message published this week on his social networks.

EXCESSIVE USE OF FORCE

The HRW complaint joins the one made last Tuesday by Amnesty International (AI), which asked the Colombian authorities "to put an end to the repression of the demonstrations" and asked the Government to "stop the militarization of cities", implemented under the figure of "military assistance", and respect.

He also demanded that it be guaranteed that "human rights are at the center of any public policy proposal," including the tax reform that is proposed after the withdrawal of the initiative that sparked the protests.

AI's Digital Verification Corps evidenced, through audiovisual material, "the excessive and unnecessary use of force by the Colombian Public Force in controlling the demonstrations."

"The Colombian authorities must promptly, independently and impartially investigate all allegations of excessive and unnecessary use of force against protesters, which has resulted in dozens of people killed and injured, arbitrary detentions, acts of torture and sexual violence, and reports of missing persons, "said the director for the Americas of AI, Erika Guevara.

ATTACKS AGAINST THE MEDICAL MISSION

According to the Ministry of Health, of the 189 attacks against the medical mission so far this year, 126 have occurred since last April 28 when the demonstrations began, which were ignited by a government tax reform that has already been withdrawn.

"64 of these reports correspond to threats and direct injuries against health personnel and 62 more against ambulances, their crews and sometimes against the patients themselves," said the head of the Office of Territorial Management, Emergencies and Disasters of the Ministry of Health , Luis Fernando Correa.

He also denounced that there was a "restriction" in the transit of medicines and equipment, as is the case with trucks that transport oxygen.

The most affected departments are Valle del Cauca, with 58 cases and whose capital Cali has been the major focus of violence in the demonstrations, and Norte de Santander (bordering Venezuela), with 37.

"The health sector calls for respect, empathy and support from the protesters and their leaders towards the health personnel, since, without the free movement of patients, supplies and medicines, the health system will be without the capacity to respond that users require in the midst of a pandemic like the current one, "the official concluded.