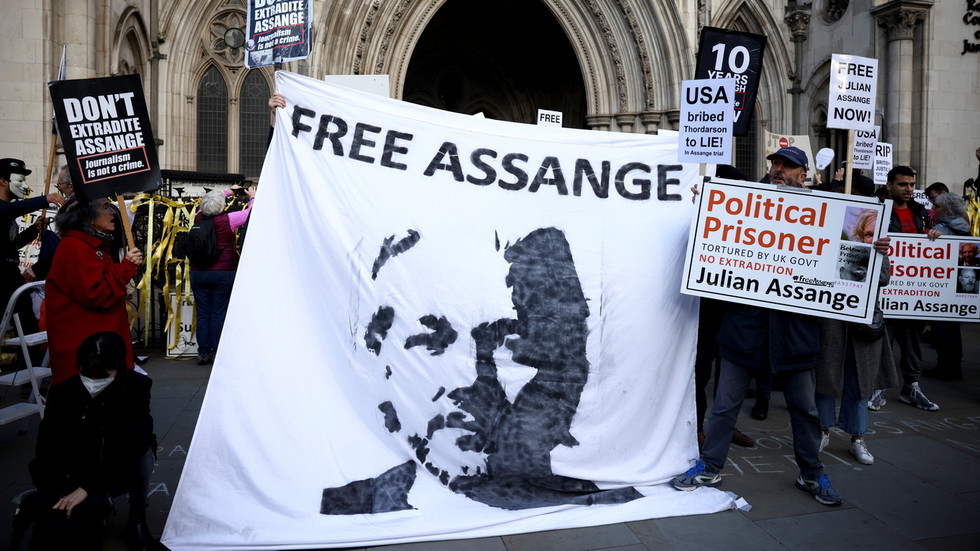 Guardian accused of sitting on bombshell story about Assange

The Guardian newspaper reportedly knew about alleged spying on Julian Assange by a CIA-connected security firm long before it became public knowledge – and pumped the company for information instead of reporting the espionage.

The allegations against the leading UK publication, which has a record of covering the WikiLeaks whistleblower, were raised by the left-wing news website Mintpress. It cited communications between the security firm UC Global and The Guardian. The company is currently being tried in Spain for its alleged role in conducting clandestine surveillance of Assange at the Ecuadorian Embassy in London, which it reportedly did on behalf of the CIA.

One particular exchange happened between the firm and Guardian correspondent Stephanie Kirchgaessner, who co-authored a September 2018 story claiming Russian and Ecuadorian officials had been planning an operation to “smuggle” Assange to Russia.

According to Mintpress, in November 2018, the Guardian journalist queried a source in UC Global, asking for a transcript of a conversation involving Assange and Rommy Vallejo, then-head of Ecuador’s National Intelligence Secretariat, also known as Senain.

Vallejo visited the embassy in December 2017 to discuss with Assange the logistics of his possible transfer to a third country. The nature of the conversation was confirmed to Mintpress by Aitor Martinez, a lawyer who oversaw Ecuador’s attempt to move Assange out of the embassy under diplomatic protection.

The suggested diplomatic posting would be in China, Serbia, Greece, Bolivia, Venezuela or Cuba, the lawyer said. He said that Russia was not considered a suitable destination by the Assange team due to obvious Russiagate ramifications. When the Ecuadorian Foreign Ministry attempted to appoint Assange as a diplomat in Russia, his lawyers refused. “We said, ‘That’s crazy, what are you talking about?’” Martinez was quoted as saying.

The request for a transcript shows that Kirchgaessner was well aware that UC Global was spying on Assange and recording his most sensitive conversations, Mintpress argued. Instead of reporting this fact to the public, the newspaper “promoted a narrative that Assange’s team was conspiring with Russia to illicitly flee the embassy,” the report said.

Mintpress posed a number of questions to The Guardian about its coverage of Assange, asking if it used flawed sources to peddle the Russiagate narrative while covering up evidence to the contrary. It said the newspaper refrained from commenting on the article prior to its publication.