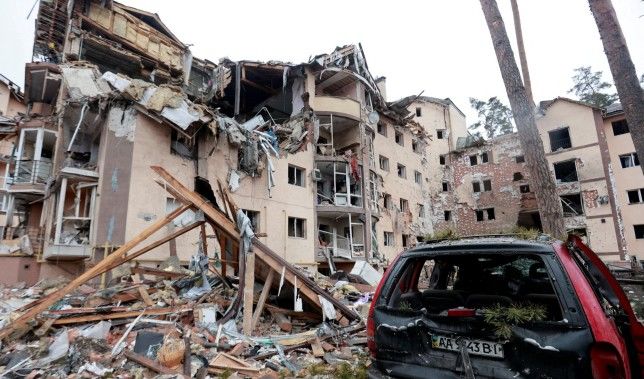 Russian soldiers have been accused of raping women during the country’s invasion of Ukraine.

‘This is the only tool of civilisation that is available to us to make sure that, in the end, eventually, all those who made this war possible will be brought to justice and the Russian Federation, as a country that committed an act of aggression, will also be held accountable for its deeds.’

Mr Kuleba called on the media to ‘spread the truth about Russia’s crimes against Ukraine’.

He said: ‘We are fighting against the enemy who is much stronger than us.

‘But international law is on our side, and hopefully it will help us. It will make its own contribution to help us prevail.’

Former British Prime Minister Gordon Brown, who also addressed the event, said he believes the prospect of Mr Putin ending up in the dock for the crime of aggression against Ukraine is ‘a realistic option’.

The former Labour leader, calling on countries to support the creation of a special tribunal to punish the Russian leader, said the plan is modelled on the actions of the nations which met in London during the Second World War to draft a resolution on Nazi war crimes, which led to the creation of the International Military Tribunals and the Nuremberg trials.

Mr Brown said: ‘President Putin has posed a fateful challenge to the post-1945 international order. He has sought to replace the rule of law with a misuse of force.

‘If we were to acquiesce in any way, none of us could ever take freedom or democracy for granted ever again.’

He said he believes it is ‘a realistic option’ that Mr Putin could end up at a tribunal, adding that governments in the European Union, some Baltic states as well as the UK have all been contacted about the idea of a setting up the legal mechanism. 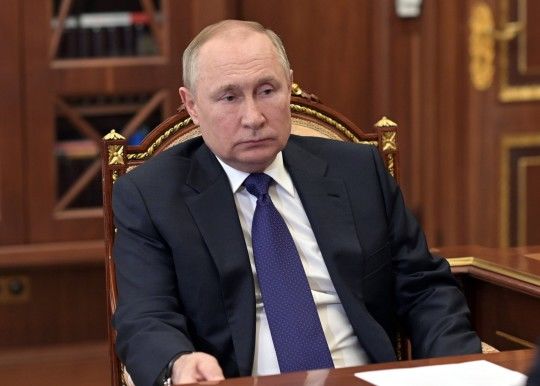 Mr Brown said: ‘I hope they are looking at it with an eye to making a decision to support this but they’re certainly looking at this with a great deal of care and resilience in the way that they are wanting to find ways to deal with this problem.’

The proposal he is supporting seeks to address a gap in the international legal infrastructure.

It has been formulated by senior international legal experts including Philippe Sands QC, director of the Centre on International Courts and Tribunals at University College London.

The lawyers are demanding that the UK and other countries join Ukraine to grant jurisdiction to a dedicated criminal tribunal to investigate both the perpetrators of the crime of aggression and those complicit in that crime.

‘As evidence mounts acts against innocent civilians including children and the use of vapour bombs, it may be that Russia can be prosecuted for these crimes.

‘But we lack a crucial extra weapon in the legal fight against Putin, because Russia has not signed up to a separate ICC statute under which nations pledge not to commit so-called “crimes of aggression”.

‘We need the special tribunal. Mr Kuleba wants us to act and I believe we must do so now.

‘Putin must not be able to escape justice.’

Echoing Mr Brown’s belief that Putin could face justice, Mr Sands said if there is ‘political will’ it is possible to set up tribunals, citing the ‘horrors of Yugoslavia and Rwanda’ as examples of where this had been possible.

On the prospect of Mr Putin ending up ‘in the dock’, the professor of law at University College London and practising barrister said it might have at one stage been ‘unimaginable that Nazi leaders like Hermann Goering and others would find themselves in the dock’ and yet it happened.

He suggested those closest to Putin might at some stage ‘break ranks’ to assist in investigations into war crimes, adding: ‘In 1945, the imminence of the creation of the Nuremburg tribunal was the basis for negotiations with some very senior people around Adolf Hitler which caused them to cut deals and to avoid prosecution themselves.

‘And I think one of the ideas would be that those in the inner circle might at some point say to themselves “Do I really want to be associated with this? Am I willing to break ranks, and am I willing to assist in these investigations?”

‘Who knows? But it’s not impossible.’