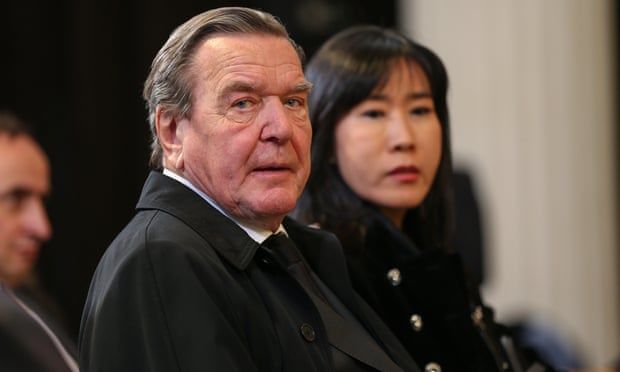 Former chancellor says he has no intention of resigning his seats on boards of Russian energy firms
The co-leader of Germany’s Social Democratic party (SPD) has urged the former chancellor Gerhard Schröder to hand in his party membership after he made clear in an interview that he had no intention to resign from his seats on the boards of Russian energy companies over the war in Ukraine.

Schröder, who was Germany’s head of government from 1998 to 2005, presides over the board of the Russian oil company Rosneft and is chairman of the shareholder committee of pipeline company Nord Stream.

Stepping down from these posts “would have been necessary to rescue his reputation as a former and formerly successful chancellor”, Saskia Esken told the German public broadcaster Deutschlandradio on Monday morning. “Sadly he hasn’t followed that advice.”

In the wake of Russia’s invasion of Ukraine at the end of February, the SPD leadership had sent Schröder a letter asking him to relinquish his roles at the Russian state-owned companies, which has reportedly gone unanswered.

Asked whether the ex-chancellor should hand in his membership of the centre-left party of the German leader, Olaf Scholz, Esken said: “That he should.”

In an interview with the New York Times published over the weekend, the 78-year-old statesman-turned-lobbyist sounded stubbornly unrepentant over the links between German industry and Russian energy providers, which was broadly continued by his successor, Angela Merkel, but has limited the ability of Europe’s largest economy to meet Putin’s military aggression with economic sanctions.

“I don’t do mea culpa,” Schröder told the US broadsheet from his office in Hanover, in north-western Germany. “It’s not my thing.” The Social Democrat suggested he would resign from his board seats only if Russia chose to turn off gas deliveries to Germany, something he claimed “won’t happen”.

While describing the war in Ukraine as “a mistake”, Schröder appeared to defend his close friendship with Russia’s president, Vladimir Putin. “The image that people have of Putin is only half the truth,” he said.

“Gerhard Schröder has acted for several years as a businessman and we should stop perceiving him as an elder statesman, an ex-chancellor,” said Esken, a leftwinger who has risen to co-leader of the SPD from fringes of the party largely unconnected to Schröder’s old network.

“He earns his money through work for Russian state companies and his defence of Vladimir Putin against the allegation of war crimes is downright absurd.”

The SPD’s traditional belief in a Wandel durch Handel (change through trade) policy of rapprochement towards Russia has come under intense scrutiny in recent weeks, even after Scholz heralded an “epochal turn” in Germany’s postwar approach to military spending.

Some members of the Green party and the liberal Free Democratic party (FDP) that make up Scholz’s coalition government have openly accused the leader of stalling on heavy weapons deliveries to Ukraine in order to appease his party’s old guard.

The three parties are under pressure to smooth over their differences at a coalition committee meeting on Tuesday, especially as the conservative Christian Democratic Union (CDU) is threatening to submit a motion on weapons exports that could expose further cracks in their power-sharing alliance.
#Angela Merkel