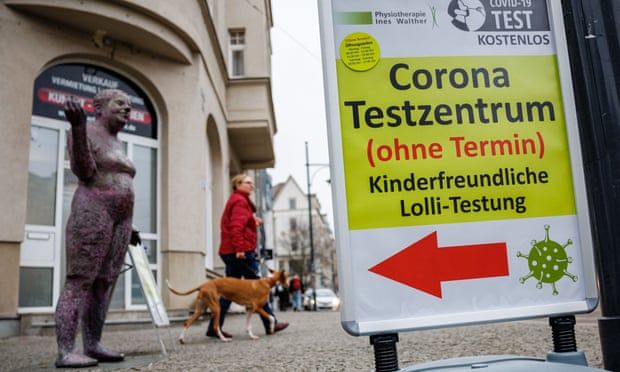 Over past 24 hours 262,593 cases have been recorded, but with testing facilities at capacity, number could be higher
Germany has recorded its highest rate of Covid-19 infections since the start of the pandemic, as mask-wearing mandates in shops, restaurants and schools will come to an end in many parts of the country this weekend.

The country’s disease control agency on Wednesday reported a record incidence rate of 1,607 new infections per 100,000 people over the past seven days, one of the highest in Europe. Germany’s Robert Koch Institute has recorded a total of 262,593 confirmed new cases and 269 new deaths over the past 24 hours.

Experts say the true number of cases could be even higher as testing facilities have reached full capacity and those who test positive with a lateral flow test are no longer required to carry out a PCR test that would show up in the statistics.

The number of people on German intensive care wards with Covid is rising but the rate of people dying of the virus is considerably lower than during the 2020-21 winter wave.

Rising infections in Germany are likely to be still driven by the Omicron variant and especially its “stealth” subvariant, BA.2, which made up almost half of all recorded cases last week. Less than 1% of infections are now due to the Delta variant.

In neighbouring France, which is also recording a month-on-month rise of infection rates, the health minister, Olivier Véran, said on Wednesday the current rebound should peak by the end of the month. Véran defended France’s decision to lift most restrictions put in place to contain the pandemic as of this Monday.

In Germany, the current set of Covid restrictions expires on 19 March and will be replaced with a more light-touch set of rules, seen as a compromise deal between the centre-left Social Democrats of the health minister, Karl Lauterbach, and the pro-business Free Democratic Party of justice minister Marco Buschmann.

Mask-wearing will remain obligatory on public transport, hospitals and care homes but not in shops, restaurants and schools.

The government is retaining an option to tighten rules – including by restricting access to nonessential shops to the unvaccinated – in hotspots experiencing dramatic surges of the virus.

Some German states, including Berlin, Brandenburg and Baden-Württemberg, have extended the current set of rules until the end of this month. “We are still some time off a ‘freedom day’,” said Berlin’s mayor, Franziska Giffey, on Tuesday.

From 1 April, the German capital is likely to end not just to most Covid-related restrictions but also free lateral flow testing options currently provided at various venues. “We should be prepared to see fewer test centres in the city,” Giffey told the broadcaster RBB.
#COVID-19  #Covid