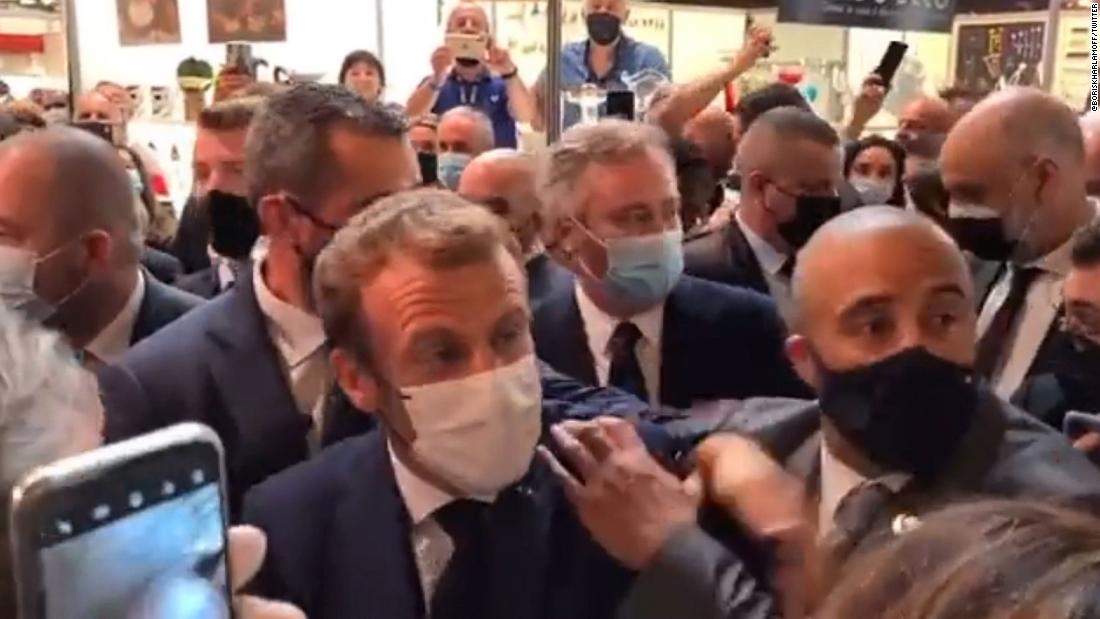 French President Emmanuel Macron was hit by an egg while taking part in a food event in Lyon on Monday.
The egg "bounced off Macron's shoulder and burst on the floor right in front of me," Florence Lago, a journalist for French publication Lyon Mag, told CNN.
Lyon Mag shared a video of the incident at the SIRHA food and hospitality fair on its Twitter account. The clip showed the egg bouncing off Macron's shoulder before the camera panned to officials detaining a man in the crowd.

The motivation behind the incident remains unclear. Lago said she saw a young man throw the egg but she did not hear him shout anything. She said security officers immediately escorted the man from the premises.

An Elysée Palace spokesperson, who was with Macron at the time, told CNN the incident was being overblown.

"The President walked around for two hours, he was warmly welcomed and everything was calm. There is nothing to say about it because it did not disrupt his walking around," the spokesperson said, adding: "I was next to the President, I can tell you there is no story."

Macron was previously targeted with an egg in 2017, when he was a presidential candidate. The egg cracked on his head in that incident.

In June this year, he was slapped in the face by a man in a crowd as he spoke to the public during a visit to southeastern France. Macron's security detail quickly intervened, tackling the man while pulling the President away from the crowd barrier.

With France's presidential elections less than a year away, Macron is on a charm offensive with voters. In June, his party performed poorly in regional elections, which were being closely watched ahead the presidential vote next April. However, given the low voter turnout, political experts said it was hard to draw conclusions.