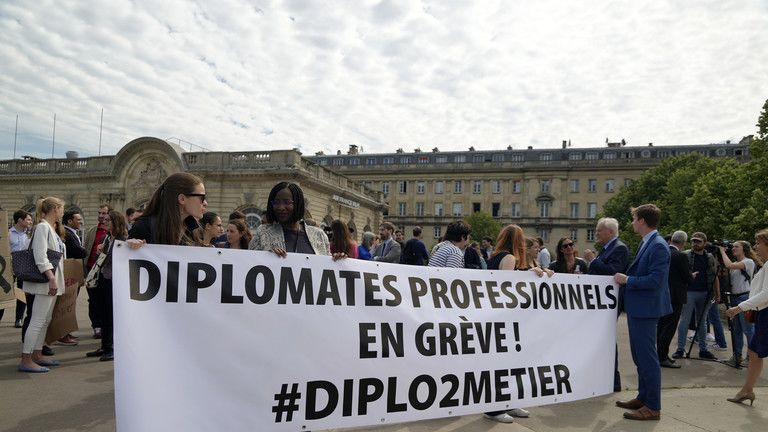 Listen to the article
0:00 / 0:00
Voice by MediaWorks
French diplomats, including several ambassadors, went on strike on Thursday to protest President Emmanuel Macron’s plan to reform the country’s foreign service.This is the first walkout in 20 years was prompted by a planned reform of the diplomatic corps
A presidential decree from April 16 provides for the merging of the diplomatic corps with a wider body of civil servants, in a bid to incorporate people from a wider range of backgrounds into the foreign service. The reform process is expected to begin next month and may affect about 800 diplomats.

However, many diplomats view the reform as a threat not only to their personal careers but to the profession itself.

“We are facing the risk of the disappearance of our professional diplomacy,” reads an open letter signed by 500 young diplomats in the newspaper Le Monde on May 25.

The signatories stressed that diplomacy is a discipline that is learned “through the multiplication of experiences, particularly abroad and on difficult positions, and the transmission of knowledge and experience between the members [of diplomatic corps].” Therefore, diplomatic responsibilities cannot be performed properly by outsiders, they argued.

The diplomats also noted that the Foreign Ministry is open to many other civil servants, given that the staff of other ministries, policemen and many “talented contract workers who come from very diverse backgrounds” work in French embassies around the world.

In a sign of protest against the “brutal suppression of the diplomatic corps,” the letter’s signatories announced a strike on June 2, which was supported by six unions. They noted that the decision was not easy to make “as it is not in the house culture.”

Many senior diplomats, including ambassadors and regional directors, have joined what is the first strike of the diplomatic corps in 20 years, announcing their participation on Twitter with the ‘diplo2metier’ hashtag.

“I will be on strike on June 2 to protest against the suppression of our professional diplomacy. There is no great foreign policy without good diplomats. Ours are multilingual, diverse, passionate, creative. They are not interchangeable,” French Ambassador to Oman Veronique Aulagnon wrote.

“We are on strike because we're opposed to the suppression of the diplomatic corps. Many of us are also tired of endless budget cuts & shortage of staff, which come with an increasing number of priorities in a very challenging international environment,” Deputy Ambassador to the US Aurelie Bonal said.

Gatherings have been planned in front of the Ministry of Foreign Affairs headquarters in Paris, as well as in Nantes, where the Diplomatic Archives Center is based. However, the protests’ organizers made it clear that the diplomats would “never put under threat” the protection of French citizens and national interests

“We call to stop work as long as it does not threaten the continuity of the defense of our interests,” the diplomat and member of CFDT trade union Olivier Da Silva said, as quoted by Le Monde.