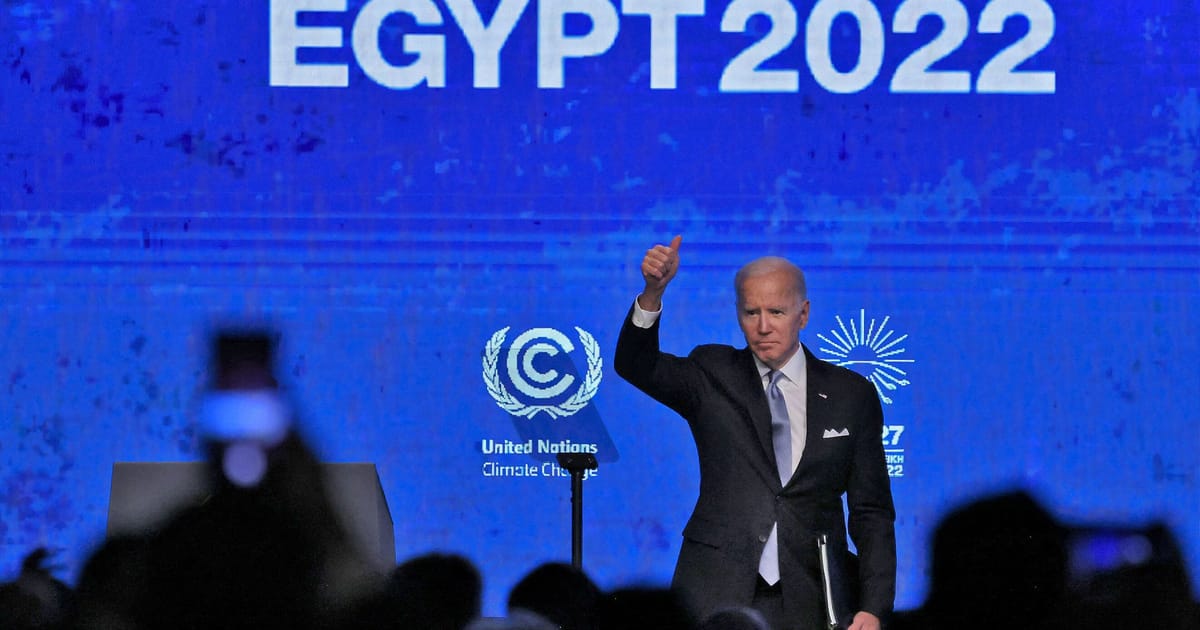 EU becomes the planet’s biggest NIMBY over US climate bill

Brussels should stop complaining about Joe Biden’s subsidies plan and ‘get its act together,’ says European Investment Bank boss.

Europe finally got what it wanted: An American president who is serious about tackling climate change. Then it turned into the world’s biggest NIMBY.

After an initially muted response to Joe Biden’s law that will spend an estimated $369 billion on energy and climate change — the first significant climate legislation ever passed by the U.S. Congress — Europe went into full freak-out mode over subsidies it said would harm its industry.

The pique from Brussels has raised eyebrows in Washington, coming as it does after years of unconcealed EU frustration at the U.S. failure to pass meaningful laws and spend the billions needed to cut its greenhouse gas emissions. Industry representatives and analysts said that by attacking the Inflation Reduction Act (IRA), Europe was missing the broader point: that this is what a serious industrial policy for climate change looks like.

"The counter argument there is, of course, wouldn't it be great if the Europeans could get their act together," Werner Hoyer, the president of the European Investment Bank, told POLITICO on the sidelines of the COP27 climate talks last month. "I mean, we are complaining about the Americans and … we have a tendency to look inward more and more. And we take actions on the present energy crisis which are totally dictated by national considerations. And that costs us, as a European Union, a huge degree of credibility."

The message coming back across the Atlantic is, “Europe … you are being ridiculous,” said Max Bergmann, a former senior U.S. State Department official who now leads the Europe program at the Center for Strategic and International Studies. “You have to start questioning, what are the priorities of European leaders? Is it to tackle the climate crisis? Or is it just the bottom line of one of their automakers … and a bunch of bureaucrats ... that are just obsessed with maintaining free trade?”

The economic ramifications in Europe are somewhat wider than that. The IRA’s subsidies for U.S.-built clean tech are far more generous than anything on offer in the EU. They are also technically limitless, meaning the amount to be paid out in tax credits and other instruments is only capped by demand. 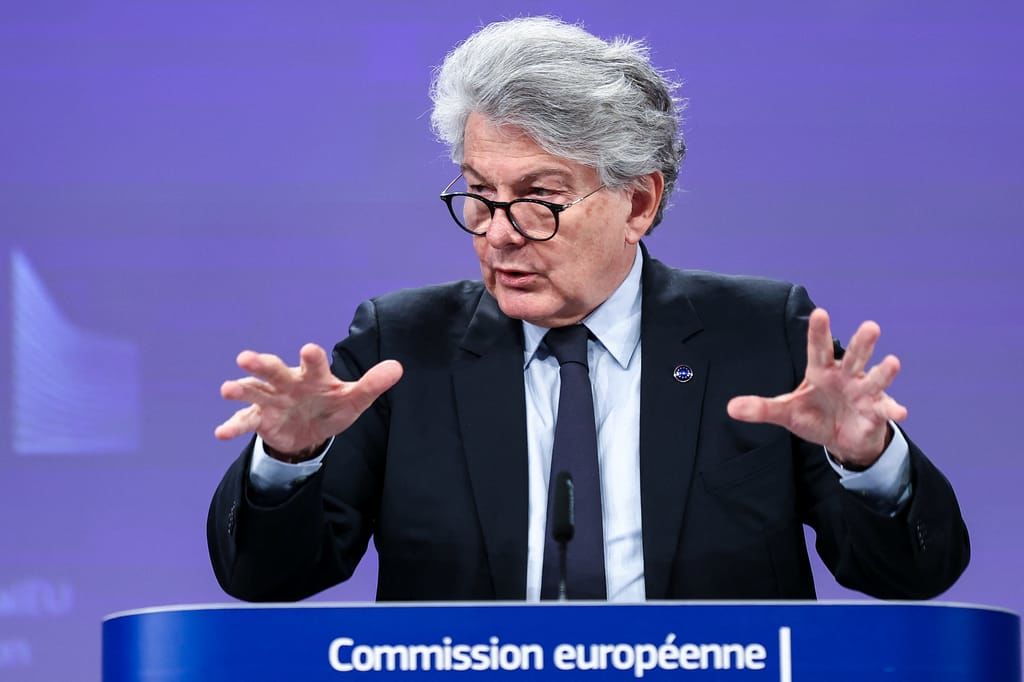 European Commissioner for the Internal Market Thierry Breton canceled his attendance at the U.S.-EU Trade and Technology Council
In response, the companies that were supposed to build European Commission President Ursula von der Leyen’s Green Deal are now prioritizing the investments needed to make Biden’s vision of a clean jobs boom a reality.

Swedish battery developer Northvolt said it was pausing a German factory expansion and looking to the U.S. instead. Germany’s Bosch has invested just shy of half a billion dollars in American electric motor and battery production since the IRA was passed in the summer. Swiss solar component manufacturer Meyer Burger is opening a plant in Arizona, raising questions about expansion of its German operations. Spanish utility Iberdrola just released a three-year €47 billion investment plan of which 47 percent will be spent in the U.S. Just 23 percent is heading for the EU.

In response, Europe lashed out. French President Emmanuel Macron called the subsidies anti-competitive and sought changes to the law from Congress (a prospect ruled out by the White House) and threatened action in the World Trade Organization. European Commissioner for the Internal Market Thierry Breton canceled his attendance at this week’s U.S.-EU Trade and Technology Council. A joint task force has been set up to explore options for accommodating Europe.

The implication that Europe was being targeted was wrong, Bergmann said. Most likely, the impact on Europe was simply not considered by the senators and the teams who drafted the bill.

“If the U.S. was intending to send a massive diplomatic F.U. to Europe through a climate bill, Europe would know,” he said.

But Europe’s sense of victimization abides. The energy crisis means Europe sees itself as shouldering the burden of Russia’s war while U.S. companies bank windfalls from LNG exports. EU Green Deal chief Frans Timmermans muttered darkly about the threat to a transatlantic relationship that underpinned “our security … our values” on a call with reporters last month.

EU angst over the IRA ignores the fact that the main target of its home-grown provisions was China, a competitor the European bloc has failed to counter. Now both the U.S and China have assertive industrial strategies that recognize the massive upfront costs of the energy transition and the fact that they are both in a sprint to dominate the economy of the future.

Europe sees itself as the “global front-runner,” as von der Leyen put it in a recent speech in Bruges, Belgium. In fact, it’s on the brink of losing the race.

The EU is at a disadvantage to its superpower nation-state competitors. The bloc’s industrial policy is fragmented across its 27 countries. The energy crisis has widened those gaps and added an additional hurdle of extreme operating costs for any prospective new project. For years the EU has relied overly on carbon pricing as its key tool for stamping out emissions, unable or unwilling to wield capital as a weapon.

“The continent’s limited ability to develop a centralized industrial strategy, or implement any kind of local content requirements, lends itself poorly to making up for lost ground when it is already far behind,” said an October analysis from Bloomberg New Energy Finance (BNEF), shared with POLITICO.

BNEF found that just building the factories to supply the refined metals, electrolyzers and parts for solar panels and batteries to meet local demand by 2030 will cost $149 billion in Europe, $113 billion in the U.S. The IRA lowers the risk of those investments through tax credits, introduces deficit checks and payments to polluting industries to shut them down.


“The EU should mimic these design principles rather than bleating about the protectionist elements,” said Tim Sahay, senior policy manager at the Green New Deal Network.

Unlike many of its politicians, Europe’s big green industrial players quite like the IRA and do plan to invest in the U.S. But that doesn’t mean they are all jumping ship. The EU's legally-mandated climate goals mean “the ambition in Europe is not in question,” said Iberdrola Executive Chairman Ignacio Galán. But the investment environment in Europe was unattractive long before the IRA.

“The energy transition needs clarity from policymakers everywhere,” said Galán. “We need unity and ambition on energy policy to tackle the current crisis. By working together to simplify and adapt its policy frameworks, Europe can rebalance the playing field and remain a global leader in attracting investment in clean energy.”

The mood music from Brussels shifted a little in recent days, as von der Leyen acknowledged that the IRA was "positive news" for the climate and that EU might need to loosen its state aid rules and provide “new and additional funding at the EU level.”

"What's done is done," Breton said at a POLITICO gala dinner on Wednesday. "We have to do our own job here, to protect our companies if we need to, without entering in a subsidies race." 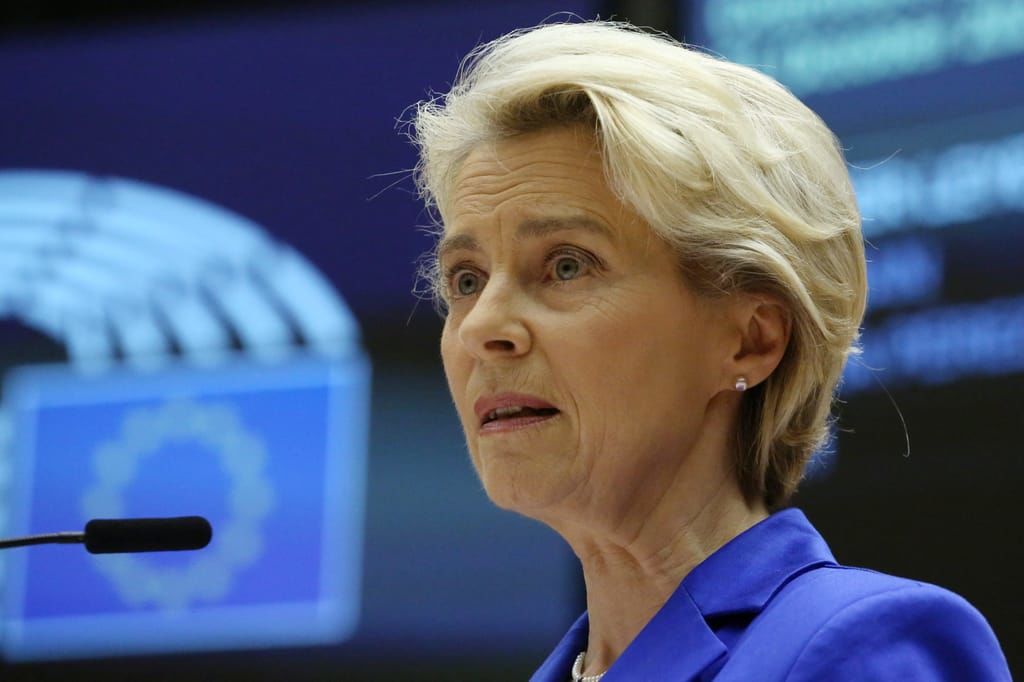 The mood music from Brussels shifted a little in recent days, as Ursula von der Leyen acknowledged that the IRA was "positive news" for the climate

The hope that the transatlantic rift might signal a new dawn for green tech in Europe is clear from the optimism suddenly coursing through the solar industry, which has long been the sector's unloved cousin.

Solar is often held up as a warning for all of Europe’s clean industries. Technology developed in the EU was used to build a Chinese industry that today dominates 80-95 percent of the global supply chain.

On the surface the IRA's subsidies should erode the prospects for European solar even further. But the sense in the industry is that it might have finally broken the EU’s slavish adherence to carbon pricing and innovation as its main drivers of transition.

Solar was one of five industries highlighted in the Clean Tech Europe platform launched this month by the European Commission. This was not on the cards before the IRA. On Friday, the Commission launched a European Solar Industry Alliance.

“It's been the wake-up call that Europe needs,” said Acke.