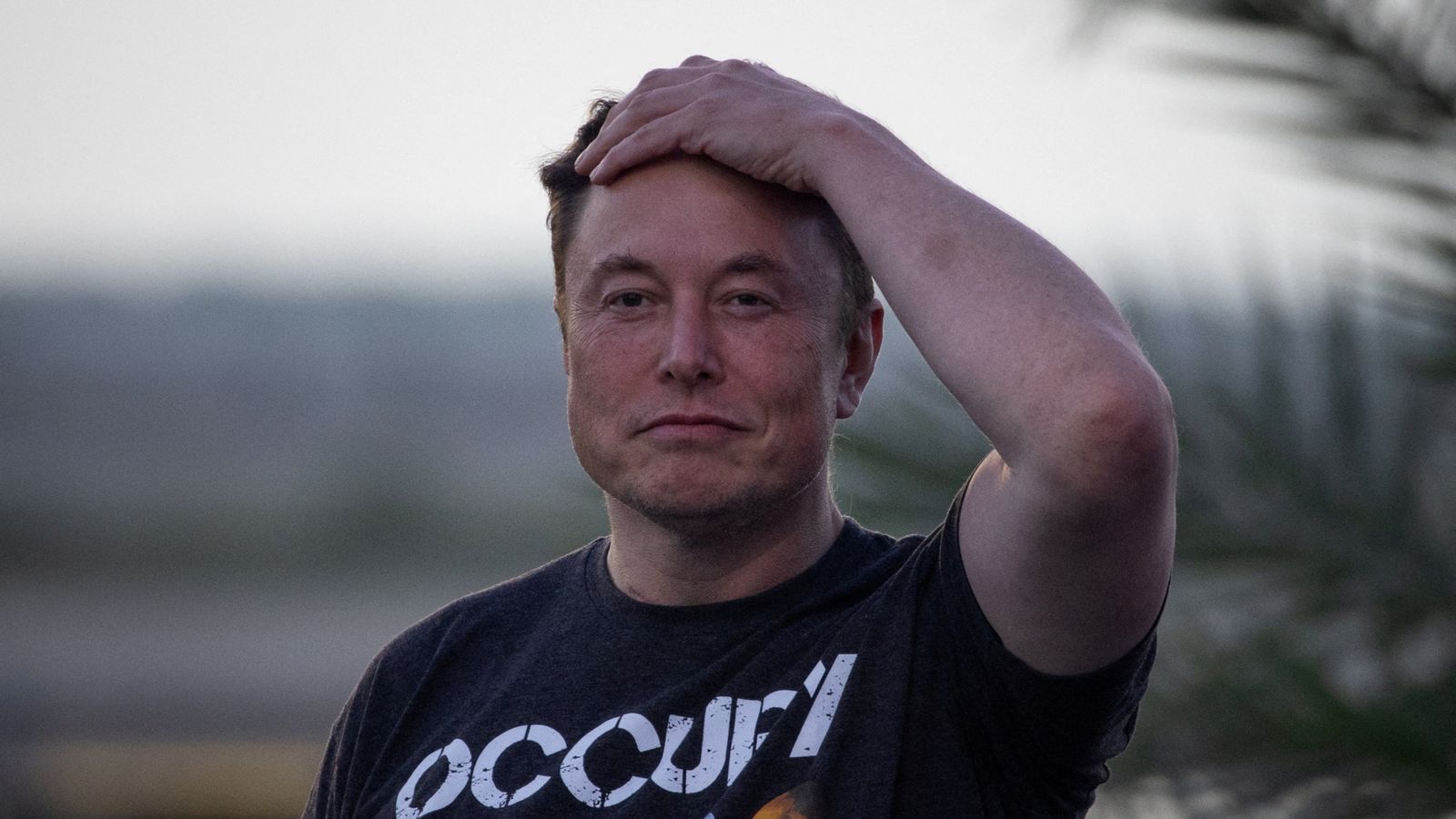 Musk appeared to brush off reports of another day of disarray at his new company, tweeting: "Usage of Twitter continues to rise. One thing is for sure: it isn't boring!"
Elon Musk raised the possibility of Twitter going bankrupt as the company endured perhaps its most chaotic day since he took control two weeks ago.

The world's richest man outlined his concerns about the firm's precarious financial position during his first mass call with its remaining employees, having already carried out thousands of sackings.

Twitter endured further departures as reports of the call first emerged, with its head of trust and safety, Yoel Roth, updating his profile to indicate that he had left.

In an earlier staff email, Musk warned Twitter - which he bought for $44bn at the end of October, after spending months trying to get out of it - would not "survive the upcoming economic downturn" without boosting revenue.

Musk wants to do that via the revamped $8-per-month Twitter Blue service, designed to offset falling advertising income as companies fret about his stance on content moderation.

Fears over his approach to user privacy also prompted an intervention by America's Federal Trade Commission on Thursday evening, warning "no chief executive or company is above the law".

Musk himself appeared to brush off reports of another day of disarray at his new company, tweeting: "Usage of Twitter continues to rise. One thing is for sure: it isn't boring!"


During his meeting with staff on Thursday, Musk reportedly warned Twitter may lose billions of dollars next year.

Bankruptcy was therefore not out of the question, he said, as the company grapples with $13bn (£11bn) of debt after his takeover deal and interest payments totalling almost $1.2bn (£1bn) over the next 12 months.

Those payments exceed Twitter's most recently disclosed cash flow, which was $1.1bn (£900m) at the end of June.

Musk said the firm was losing $4m (£3.4m) each day, largely because of advertisers putting spending on hold due to fears about his "free speech absolutist" position.

His attempted solution, Twitter Blue, has ended up somewhat proving the point. It entitles anyone who signs up to a blue checkmark previously reserved for verified accounts, but has been abused by pranksters posting offensive messages under the guise of Tony Blair, George W Bush, and even Nintendo mascot Super Mario.

The option to sign up has since disappeared from Twitter's iOS app.


Musk laid off half of Twitter's 8,000-strong workforce soon after his takeover, having moved even more quickly to dismiss its top executives.

This week has seen even more people leave, chief among them Mr Roth, who has overseen Twitter's response to hate speech, misinformation, and spam.

Mr Roth had been one of the more vocal remaining members of Twitter's top team since Musk's takeover, assuring users and advertisers that the platform was still committed to combating those issues.

His profile changed on Thursday to indicate that he no longer worked at Twitter - he is believed to have resigned.

It came after Musk told staff he was banning working from home, with all workers expected to be in the office for at least 40 hours a week.


The exodus of safety, security, and privacy officers saw the US Federal Trade Commission (FTC) express its "deep concern" about developments at Twitter.

In May, Twitter agreed to pay $150m (£128m) to settle allegations by the FTC it misused private user information to target advertising after telling them the data was collected purely for security reasons.

Douglas Farrar, the FTC's director of public affairs, told Reuters: "No CEO or company is above the law, and companies must follow our consent decrees.

"Our revised consent order gives us new tools to ensure compliance, and we are prepared to use them."
#Elon Musk