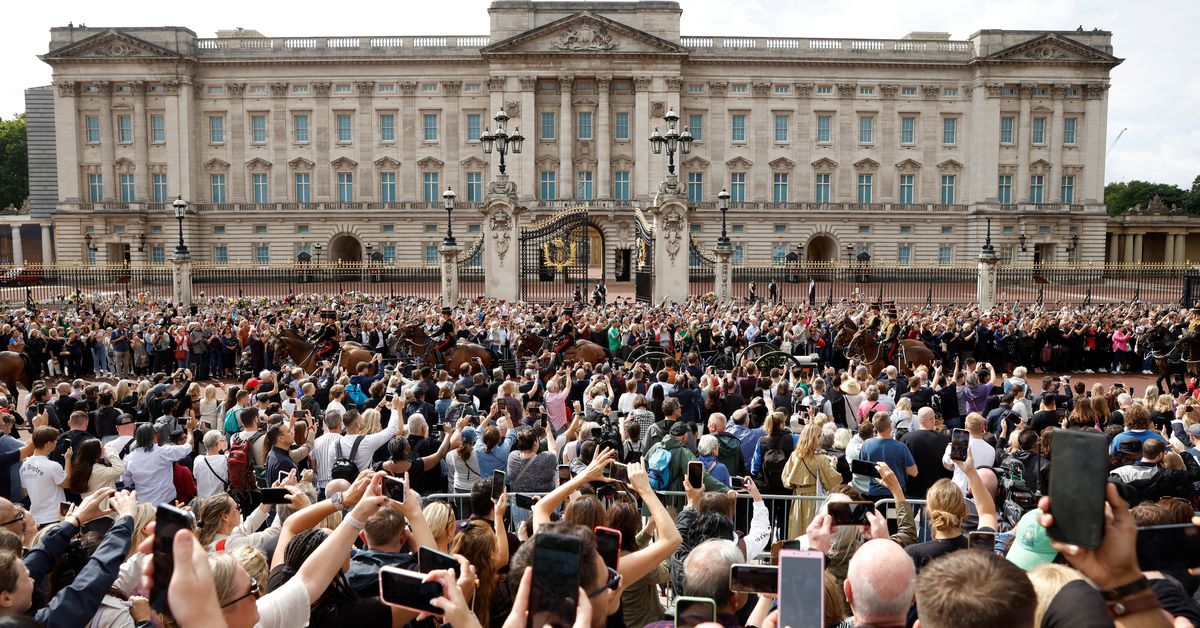 The crowd gathered outside Buckingham Palace to pay respects to the late Queen Elizabeth on Friday were rewarded with a surprise that brought cheers on a sombre day when King Charles came to shake hands and talk with dozens of well-wishers.

Thousands of people, from ordinary Britons to foreign tourists, had congregated outside the palace in London, as well as the other royal residences of Windsor Castle, just west of the capital, and Balmoral in the Scottish Highlands.

Many had laid flowers outside the residences, the piles growing higher as the day went on. Some people were in tears and hugged each other as they struggled with the shock and sadness at the queen's death at Balmoral on Thursday.

But when King Charles and his wife Camilla, Queen Consort, arrived back at the palace in central London after flying down from Balmoral, they stepped out of the royal car just outside the gates.

The couple, dressed in black, were greeted with huge cheers and applause from the crowd. The king, flanked by security guards, proceeded to shake hands with well-wishers and look at floral tributes to his mother for more than 10 minutes.

The mood changed to joyful and gloomy faces broke out in smiles. Several members of the public sang "God save the King" and one shouted "Love you Charles!"

One woman kissed King Charles' hand, while another leaned over the security barrier to hug him and kiss his cheek.

Joy Hounsome, 86, from Oxfordshire, said she acted on impulse when she kissed him.

"He didn't flinch," she laughed. "He said thank you very much." She said she felt a sense of mutual comfort. "I have every faith in him."

She said she told him: "I'm sorry for your loss" before she kissed his hand.

Denise Berriman, 73, from Stanstead, north of London, told Reuters: "I said 'thank you for coming and I’m so sorry', and he said 'thank you' to me. Then I told Camilla to look after Charles, and she said 'I'll try'."

"I was amongst the first people to shake the hand of the King of England. I was two-and-a half when Elizabeth became Queen, and we will never have someone like her again, and I'm 73 now watching her son become King. I shook his hand, people cheered. I felt so emotional," she said.

Earlier, people had spoken of their grief over Queen Elizabeth's death, and praised a woman who had been part of their lives for so many years through good times and bad.

"It's not as if it wasn't expected but it's a shock. It's just she was such a rock, wasn't she, for so long really," said Deborah O'Brien, who was visiting Balmoral from Norfolk, in eastern England.

"She's been around for so long, being sort of like the face of Britain and the Commonwealth, so it's just that sort of shock of it being different, it just sort of doesn't feel real," said Aberdeen resident Dan Buckley, 22, who had braved the Scottish rain to pay his respects at Balmoral.

Others praised her sense of duty and the fact that she had been working almost up her death, meeting the outgoing Prime Minister Boris Johnson and his successor Liz Truss at Balmoral on Tuesday.

Alice Hendry, a 48-year-old textile designer, was among the crowd outside Windsor Castle, where a constant stream of people came to lay flowers.

"What an amazing lady. She was working right up until two days before, swearing in a new prime minister. That's quite remarkable. You know, when somebody takes an oath to serve their country and their sense of duty to last their whole life. I mean, what a shining example of that."

Thousands of people packed the area in front of Buckingham Palace and up the Mall, the boulevard leading to it. Some had dyed their hair red, white and blue, the colours of the Union Jack flag.

Liam Fitzjohn, 27, a railway worker from South London, had brought his young daughter.

"Even though she won't remember it, we can tell her she was here as history was happening," he said. "We just had to come bring flowers. She's all we ever knew, we will never have a Queen like that again."

Some of those outside Buckingham Palace were foreign tourists, some in tour groups and even carrying suitcases.

"I'm flying back to Japan today, and I dropped by on my way to the airport," said Nobu Yamanaka, 52. "I carried my big bag through the line for this special occasion. Everyone in Japan is watching it."

At Windsor, Sharon Stevens, a 57-year-old employee of the Royal Meteorological Society, said she was shocked and sad.

"But then also you want to celebrate what an amazing woman she was and the legacy she left. And you just felt we had to come here today and just pay our respects because she's always been part of our lives."

Kay McClement, a 55-year-old tourism worker who lives near Balmoral, said she came with a friend to drop flowers.

"She was amazing. She was like everyone's granny. She always managed to capture the mood with her words and she loved Britain."