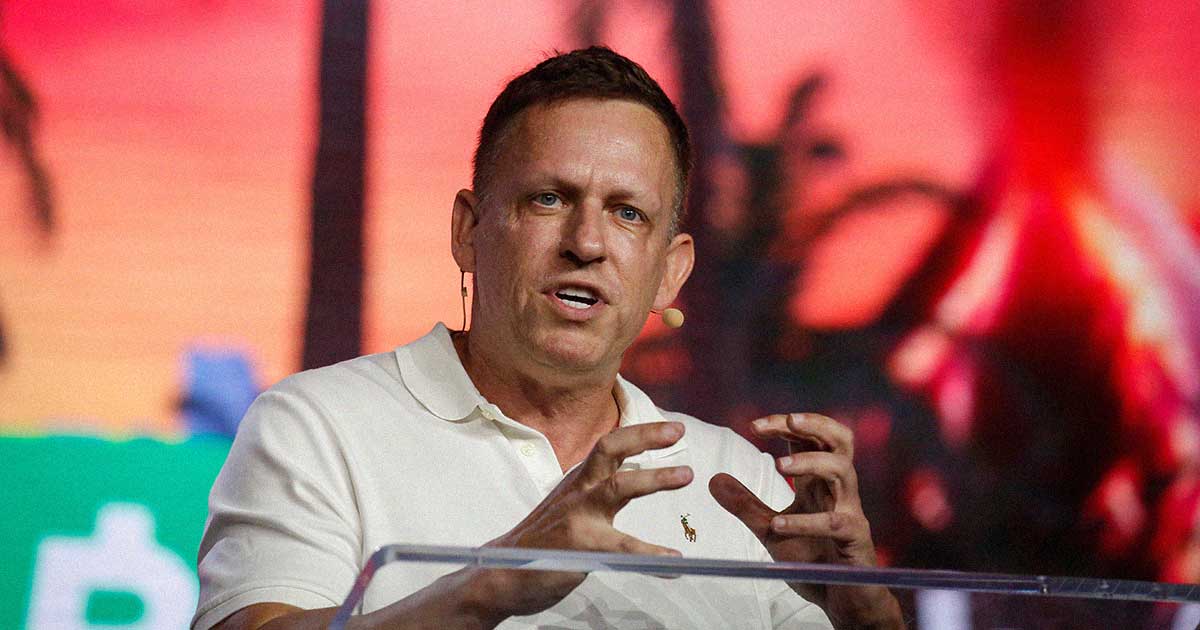 Peter Thiel, billionaire entrepreneur and top campaign donor has decided to back a "femtech" app called 28, created by the divisive Evie Magazine.
The app, created by a controversial women's publication called Evie Magazine, claims to be a "cycle-based" nutrition and wellness program that helps women "reclaim control of [their] bodies, in the most natural way possible."

Neither the billionaire's venture firm Thiel Capital nor Thiel himself are strangers to health and life science investments, but funding a fertility startup is a bit of a turn, especially at a moment during which a lot of Americans have just lost, rather than reclaimed, a significant degree of bodily autonomy.

And a closer look at the app, and those who made it, illuminates a powerful political intersection between tech, health, the wellness industry, and modern conservatism in which conspiracy theories and dubious pseudoscience are feeding a growing counter-counter-culture.

For starters, the science is sketchy. The core premise of the app appears to get women off modern birth control methods, like the hormonal pill or an intrauterine device. Its website is almost comically vague on what the alternative might be, but a focus on "cycles" suggests that it's essentially the rhythm method, which basically entails attempting to avoid sex during ovulation. That's fine in principle, but the rhythm method is statistically quite ineffective, with about a quarter of couples using it accidentally becoming pregnant over the average year.

The publication behind the app raises even more questions. Evie appears to be somewhat of a Cosmopolitan-meets-MindBodyGreen-meets-Tomi Lahren situation: makeup, workout, and holistic wellness tips and tricks are sandwiched between transphobic essays and anti-vaxx arguments. Its anti-birth control cycle-tracking app — which, yes, requires that women input potentially incriminating menstruation data — seems like a natural extension of that apparent mission: the rejection of a very specific version of "feminism" in order to embrace an old-meets-new version of traditional femininity.

"With love, we embrace our nature and our bodies, and care for them the way they deserve," reads 28's website. "With courage, we asked questions that were unpopular, challenged the status quo, and didn't wait for society's permission."

"Women were tired of the pill and the negative impact it's had on their brains and bodies. They were getting off it in droves and looking for natural alternatives," the magazine and app's co-founder Brittany Hugoboom recently told TechCrunch, adding that "we want to democratize the science of hormone and menstrual health. And provide women everywhere with tangible tools to physically and emotionally flourish."

It's true that many women have experienced adverse reactions to the pill. It's also true that women, especially women of color, have long been left out of medical studies, and tend to face mistreatment by the medical establishment.

But even with those realities in mind, 28's anti-birth control rhetoric discounts the fact that there are many, many different kinds contraceptives these days, with no one-size-fits-all to reproductive care. It's also true that the demonization of hormonal birth control specifically has become a sort of rallying cry in certain circles of the women's wellness community, where skepticism and conspiracy theories, cult-followed "conspiritualist" influencers like Kelly Brogan, and "doing your own research" reign supreme. Somehow, in these growing communities, embracing the pill is to reject an inherent womanhood, and rejecting the pill, in turn, is the only path to "healthy hormones, self-discovery, and a beautiful, feminine physique," as 28 claims.

This anti-contraceptive ethos fits into a Evie's broader anti-abortion, pro-life messaging. One 2021 Evie story, titled "Argentina, A Hot Spot For Human Trafficking, Just Legalized Abortion," argued — falsely — that "trafficking, abuse, and abortion are inextricably, intrinsically linked," while many of its other stories make similarly dubious anti-abortion claims. More than one suggest that the abortion pill is bad for women, while another claims that abortion is an "anti-woman issue that has nothing to do with bodily autonomy or reproductive freedom." And as Vice points out, Hugoboom's personal Twitter account is riddled with anti-feminist, pro-life rhetoric. (The magazine, in the face of all this, claims to be apolitical.)

That all being said, what could Thiel possibly want with an app like this? Other popular cycle-tracking apps already exist. Why would he want in on 28?

Of course, he could want the data, which has been a concern regarding some of Thiel's past investments, especially those related to his CIA-backed data analytics firm Palantir (Hugoboom has claimed that 28's data is protected, although Vice points out that details as to how are scarce and flawed). Vice also turns to the famous contrarian's well-documented penchant for funding and participating in bizarre health treatments, many of which center on an apparent interest with youth and living forever — an obsession shared by many in the tech industry, where the strangest of wellness treatments and "biohacks" run amuck.

But Thiel isn't only in the tech industry, nor is he just interested in funding startups. He's also in the business of campaign financing, and most of the campaigns that the billionaire has recently funded (Arizona candidate Blake Masters, Ohio candidate J.D. Vance, and former president Donald Trump, to name a few) share the Evie principles: anti-woke, anti-abortion, anti-feminism, anti-trans, and so on. Funding Evie isn't just a business bet. It's a political one, too. And in post-Roe America, Evie Magazine and 28, unfortunately, both seem like safe bets to make.

"I tried to follow the science, but it simply was not there," reads a graphic, recently retweeted by Hugoboom. "I then followed the money, and that's where I found the science."