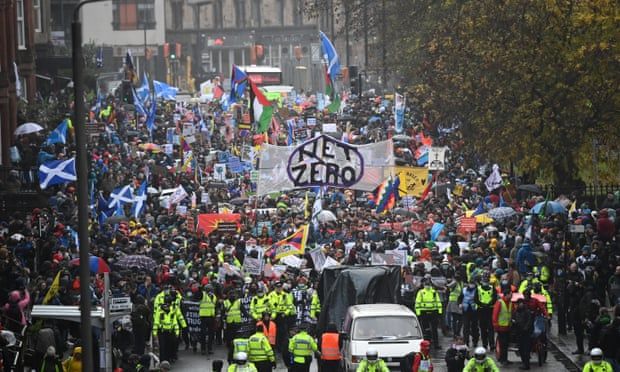 Climate protests: fury, and optimism, in the Glasgow rain

As Cop26 reached its halfway stage, mass rallies were held across the UK and around the world

Tens of thousands of protesters took to the streets of Glasgow on Saturday to demand stronger climate action from world leaders as the climate crisis summit reached its halfway stage.

Protests were also held in London and other parts of Britain. There were rallies in South Korea, Indonesia, the Netherlands and France. Environmental groups, charities, climate activists, trade unionists and indigenous people all joined the Glasgow march in heavy rain. Extinction Rebellion activists dressed as Ghostbusters while another group, Scientist Rebellion – wearing white lab coats – blocked King George V bridge, one of the city’s busiest routes.

Organisers claimed more than 100,000 people turned up for the march, which began in Kelvingrove Park in the city’s west end and finished at Glasgow Green in the east.

Lucy Bell, who works for the Vegan Kind, an online vegan supermarket based in Rutherglen, said: “There are so many people here from different backgrounds. It’s easy to get discouraged by the negotiations going on behind closed doors, but I’m feeling optimistic.”Cop26 delegates were also scattered among the huge crowds. Tracy Sonny, 37, a negotiator from Botswana, said he was taking part to show solidarity and to call for more unity. “We need to see more political will and a change in mindset ... we’re already feeling the impact of climate change; we need to respond now, people are drowning,” he said.The mood was “celebratory, positive and punchy”, according to Mary Martin from Coatbridge. She was “walking the walk”, she said, shivering against the strong wind. As for the progress of the climate talks, “I’m holding my breath,” she said.

Cop26 delegates focused on nature yesterday, with a slew of pledges being made by UK supermarkets, which promised to halve their impact on the natural world.

Partnerships between developed and developing countries to conserve biodiversity and initiatives to promote sustainable agriculture were announced, while the governments of 26 countries including India, Germany, Australia, Ghana and Vietnam set out new commitments to make their farming policies less polluting. They also agreed to invest in scientific research on how to protect food supplies against the effects of the climate crisis.

“We are going low-carbon and high-nature,” Tony Juniper, chair of Natural England, said. “Sometimes there has been a sense of a trade-off, trying to sacrifice nature while going low-carbon. They were seen as separate, but there is a growing body of evidence showing people how you can do both.”Juniper pointed to recent reviews that have shown how clean water, clean air, food and a healthy environment were not valued adequately under current economic systems. “Now we are having a different conversation about nature – we can see the economic necessity, the social necessity of protecting nature, as well as the ethical and moral drivers.”

Developing countries coming to Glasgow could draw a lesson from the scars of industrialisation all around the UK, in the pollution of upland areas, the despoliation of forests and other natural habitats, and the toxic legacy of old mines, Juniper added. “They can leapfrog these dirtiest stages of development we went through and go directly to sustainable development.”He also rejected the idea that moving to a low-carbon lifestyle would involve sacrifice. “The way I would look at it is not to think about sacrifice but about gain. We gain human health, wellbeing, social cohesion. We gain jobs and peace and security.”

The actor Idris Elba warned policymakers and the media that they risked ignoring a continent “that is central to the solution” of climate change if they did not include African voices in public debate. The star of The Wire and Luther, accompanied by his wife Sabrina, joined a panel on sustainable food production at the climate talks. The couple are both goodwill ambassadors for the UN’s International Fund for Agricultural Development. Also present was Ugandan climate activist Vanessa Nakate. 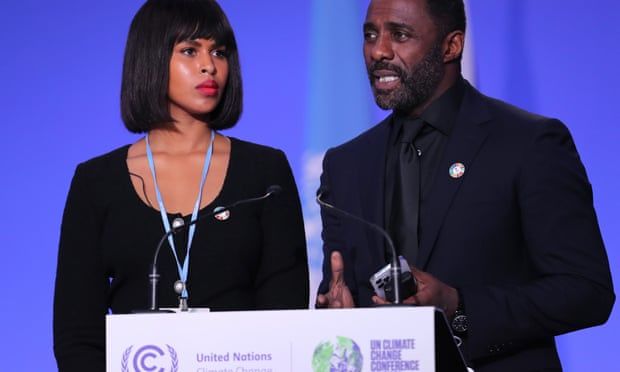 Idris Elba and his wife, Sabrina Dhowre, are goodwill ambassadors on agricultural development for the UN.

Asked why it was important that the voices of people of colour are heard as the world attempts to decarbonise food production, Elba replied: “I think Sabrina and I stand here as human beings first, but absolutely, yes, it is important for us as proud Africans to be a part of this debate.”

As the conference enters its final week, Boris Johnson urged delegates “to drive for the line”.

“We have seen nations bring ambition and action to help limit rising temperatures, with new pledges to cut carbon and methane emissions, end deforestation, phase out coal and provide more finance to countries most vulnerable to climate change,” he said. “But we cannot underestimate the task at hand to keep 1.5C alive. Countries must come back to the table this week ready to make the bold compromises and ambitious commitments.”