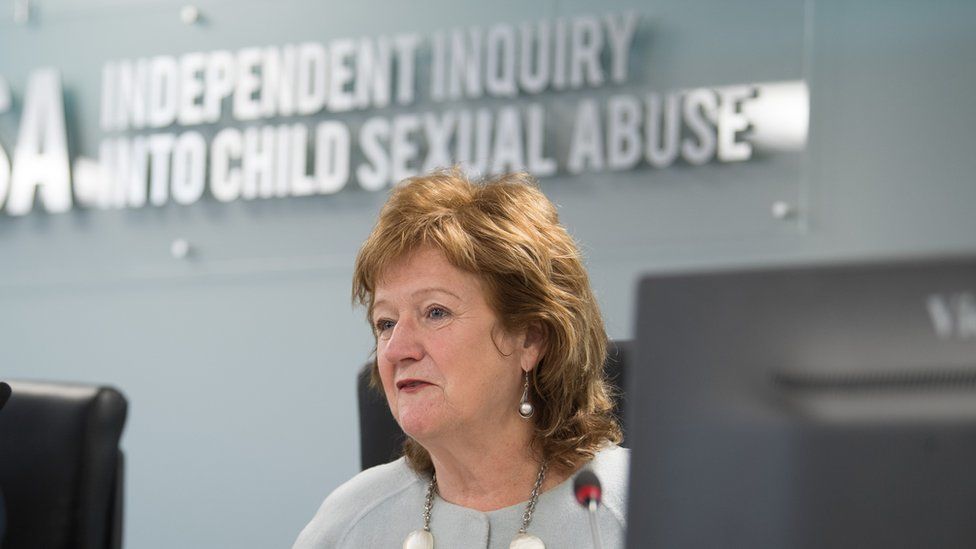 Child sex abuse: Failing to report it should be made illegal - major inquiry

Anyone who works with children and does not report child sexual abuse should be prosecuted, the final report of a huge, seven-year inquiry has recommended.

It called the nature and scale of abuse in England and Wales "horrific and deeply disturbing" with children "threatened, beaten and humiliated".

Chairwoman Prof Alexis Jay described an "epidemic that leaves thousands of victims in its poisonous wake".

Prof Jay said some victims would never recover from their experiences.

"We heard time and time again how allegations of abuse were ignored, victims were blamed and institutions prioritised their reputations over the protection of children," she said.

"We cannot simply file it away and consider it a historical aberration when so much of what we learned suggests it is an ever growing problem exacerbated by current and future threat of the internet."

Former prime minister Theresa May told BBC News she had "no idea" of the scale of child abuse when she set up the inquiry as home secretary, and was "absolutely horrified" when it became increasingly clear.

"The sad thing is very often children were raising this. Children were saying that this was happening to them and we weren't listening," she added.

The report says institutions too often "prioritised their personal and institutional reputations above the welfare of those they were duty bound to protect.

"Blame was frequently assigned to the victims who were treated as if they were unworthy of protection."

Some institutions did not respond at all to the inquiry's investigations, while others merely offered "insincere apologies and inadequate provision of support and counselling".

The inquiry has been criticised for focusing too much on past events, but IICSA's report said online abuse had increased in recent years and there were many lessons for modern organisations to learn.

"Child protection must be given a much greater priority in public life," it concludes.

The inquiry says its 20 key recommendations need to be accepted by government as a "matter of urgency".

These include a new law placing a duty to report child abuse on anyone who witnessed or was told about it by children or perpetrators.

Not doing so would result in a criminal offence unless the behaviour was consensual and non-abusive between young people of similar ages.

This would cover "anyone working with children", an inquiry official said, as defined under the Sexual Offences Act 2003.

But the pressure group Mandate Now says this recommendation is "very limited".

The group wants it to be an offence to fail to report any signs that children are being abused, such as recognisable changes in behaviour or mental health.

Mandate Now say the inquiry's recommendation is "mandatory reporting in name only".

The inquiry also argues for new child protection authorities for England and Wales - and a new, single scheme for compensating victims of abuse.

It dismissed concerns that victims might "lie for money" as "misplaced and offensive".

The inquiry's final, over-arching report was published on Thursday. It has already published reports highlighting abuse across a range of institutions, including religious organisations, politics, children's homes and schools.

The report says the Roman Catholic church presided over a "sorry history of child sexual abuse," - between 1970 and 2015, there were 3,000 complaints and 133 convictions. Millions were paid in compensation to victims.

In the Church of England there were 390 convictions dating back to the 1940s.

In other religions there had been "significant barriers to effective reporting of child sexual abuse, including victim blaming and notions of shame and honour".

The Independent Inquiry into Child Sexual Abuse (IICSA) was set up in the wake of the Jimmy Savile scandal by then Home Secretary Theresa May.

Hundreds of people came forward after the presenter's death in 2011 to say he had abused them as children.

The public inquiry was given a broad remit to investigate historical allegations of child abuse, dating back to the 1950s, as well as claims that authorities, including the police, failed to properly investigate these allegations.

About 7,000 victims of abuse have provided testimonies and 725 people gave evidence over 325 days of public hearings, contributing to 15 investigations and dozens of reports.

The inquiry examined claims of abuse at children's homes including, Cambridge House and Knowl View, in Rochdale.

In Nottinghamshire children's homes there were 350 complainants about abuse by staff.

Another massive abuse scandal centred on Lambeth Council in south London where the inquiry said it was "hard to comprehend the cruelty and sexual abuse inflicted on children".

The inquiry has identified particular concerns about boarding schools and some specialist schools, such as those teaching music and highlights "deeply distressing cases" where the school was seen as more important than victims.

The inquiry said the post-war programme of child migration to Australia and other Commonwealth countries had been "deeply flawed" and caused "lifelong damage to children".

When the inquiry began there were fervent rumours that a "Westminster paedophile ring" had abused children. IICSA uncovered no evidence of that, despite finding many "individual perpetrators".

Labour's shadow home secretary Yvette Cooper called the findings "harrowing" and urged the government to act immediately to prevent known abuse cases being disguised or covered up by powerful institutions.

The government says it will respond in full to the report within six months.

Home Secretary Grant Shapps, who took up the office on Wednesday, pledged to keep the voices of victims and survivors "front and centre in everything I do".

Justice Secretary Brandon Lewis said the government would continue to transform the justice system's response to these heinous crimes, locking up child abusers for longer, making sure predators cannot use sports or religious roles to harm young people and hugely increasing funding for support services so no victim suffers alone."

Clare Devlin spoke to the BBC about her experience of sexual abuse as a child by her father, a senior judge