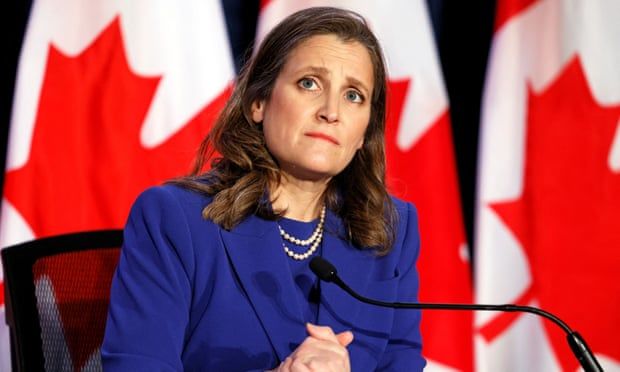 Government under pressure after prices climbed by more than 20% last year, while rental rates have also been rising
Justin Trudeau’s government has announced it will ban foreign investors from buying homes in Canada for two years, in a bid to cool off a hot housing market.

The finance minister, Chrystia Freeland, took a number of measures to tamp down speculation and demand amid record home prices in announcing the federal budget for the year.

The government announced a two-year ban on foreign home buying as well as higher taxes for people who sell their home within a year, though both measures include multiple exceptions including for permanent residents and foreign students.

The budget also includes billions for new housing and measures to help Canadians trying to get into the market, including a new savings account and changes to the first-time home buyers tax credit.

The government is under pressure to cool an overheated market after prices climbed by more than 20% last year, while rental rates have also been rising.

The federal Liberal government is also promising C$500m (US$397m) in additional military aid to Ukraine as well as more humanitarian and financial support to Kyiv in response to Russia’s invasion.

Canada responded to months of pressure from the Nato military alliance and others by promising more than C$8bn in new military spending over the next five years. Canada will remain far short of Nato’s spending 2% of GDP target, even as other allies dramatically ramp up their own military investments following Russia’s invasion of Ukraine.

Last month, the Canadian government announced it selected Lockheed Martin Corporation and the F-35 as the preferred bidder in its competition to buy a new fighter jet.