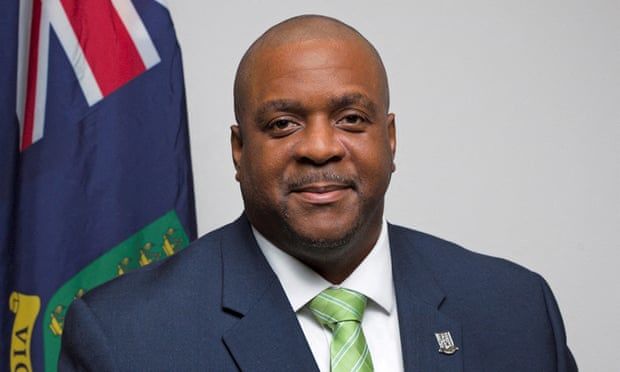 Judge rejects prosecutors’ claim that Andrew Fahie, arrested in DEA drug sting, could flee US if freed from prison

The premier of the British Virgin Islands, whom US prosecutors described in court as “corrupt to the core”, has been given a $500,000 bond that would allow him to be released from prison as he awaits trial on charges tied to a US narcotics sting.

Federal court judge Alicia Otazo-Reyes rejected prosecutors’ argument that Andrew Fahie would flee the US and possibly engage in criminal activity if he is freed.

Instead, she said on Wednesday that he could remain in Miami, confined to the rented apartment of his two college-age daughters, if he and his family surrender their passports and he wears an ankle bracelet monitor in addition to paying the sizeable corporate surety bond.

Assistant US attorney Frederic Shadley said the government would appeal against the decisionand it was unclear when Fahie would be released.

Fahie, 51, was arrested last week at a Miami airport during a US Drug Enforcement Administration sting after allegedly being given what he thought was $700,000 in cash, that was to be flown back on a private jet to the British Virgin Islands on Fahie’s behalf. Also arrested was his ports director, Oleanvine Maynard.

Fahie stood handcuffed shaking his head in disagreement as Shadley told the court that the politician had bragged in recorded conversations with a DEA informant that this “wasn’t my first rodeo” with criminals.

According to court documents, a DEA informant posing as a member of Mexico’s Sinaloa cartel allegedly met on several occasions with Fahie, Maynard and Maynard’s son to discuss a deal that would send thousands of kilograms of cocaine from Colombia through the British Virgin Islands and on to Puerto Rico, Miami and New York.

In exchange for bribes and 10% – or about $7.8m – for each 3,000kg load of cocaine sold in Miami, Fahie and his co-defendants allegedly agreed to provide safe passage for the drug shipments and create a network of shell companies to launder the proceeds.

“So, this is the full seven?” Fahie allegedly asked the DEA informant who accompanied him to the Miami airport where he was arrested.

“He’s shown in this case that he’s corrupt to the core and believes he’s above the law,” Shadley said. “He was a public servant sworn to uphold those laws but he broke them over and over again.”

Fahie’s attorney, Theresa Van Vliet, disputed that characterisation and said her client would plead not guilty when he is arraigned later this month.

She asserted that because the British Virgin Islands are a British overseas territory, US courts have no jurisdiction over Fahie.

To back up the assertion, she filed what she called a “diplomatic note”, signed by an unidentified official from the premier’s office in Road Town, requesting his “immediate and unconditional release”. The request was sent to the justice department’s office of international affairs.

Fahie’s former allies appear to have disavowed the letter, however.

In a brief announcement on Wednesday, the acting premier, Natalio Wheatley, said the letter was sent erroneously by a “rogue” official, and “does not reflect the position of the premier’s office or the government of the [British] Virgin Islands”.

Even before his arrest, Fahie was under pressure from a special UK-led commission of inquiry investigating corruption on the islands.

Gov John Rankin, who is Queen Elizabeth II’s representative to the islands and its ultimate executive authority, said the arrests prompted him to release the commission’s report, which concluded that officials, including allies of the premier, fraudulently spent millions of dollars on projects of no public benefit.

In a bid to clean up the government, the commission recommended suspending the islands’ constitution for two years and returning the territory to home rule by officials in London.

In an address over the weekend, Wheatley said he wants to avoid direct rule by Britain but supports working swiftly with Rankin and opposition lawmakers in the islands to address concerns about good governance.

“Direct rule is not an acceptable option to us,” Wheatley said. He said it “would undermine all the progress that our people have made over generations” since 1950, when a local legislative body was launched.

If convicted, Fahie faces a minimum of nearly 20 years in prison.