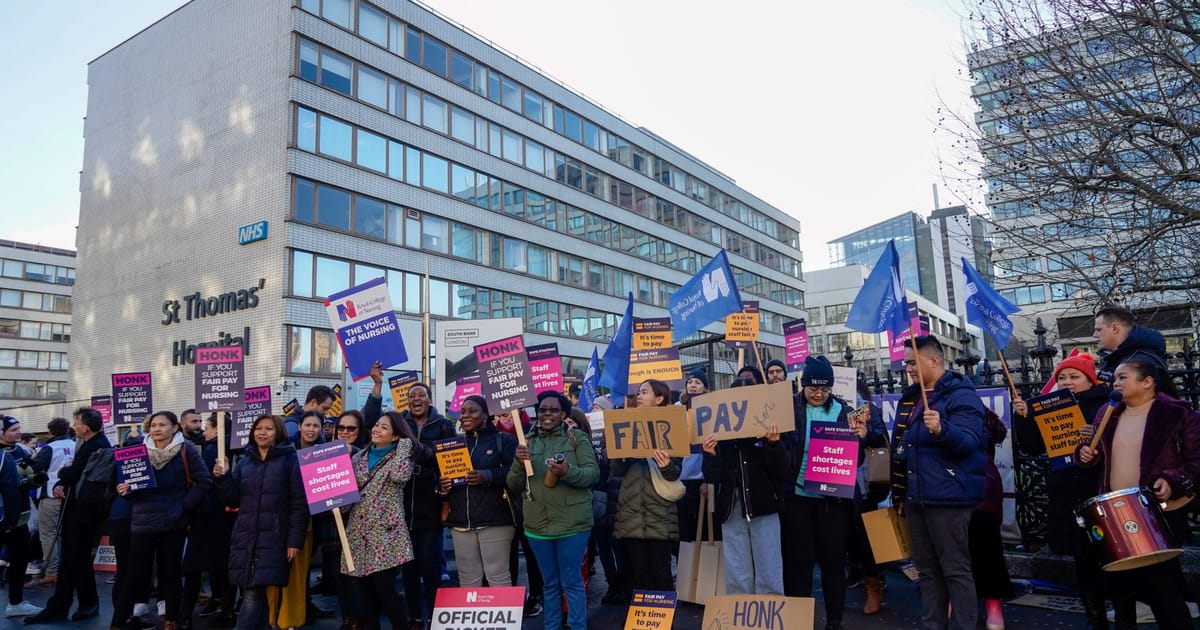 Despite the effect on health service provision, the public overwhelmingly supports striking nurses.

Britain’s nurses have walked out of the country’s hospitals in a stand off over pay with Prime Minister Rishi Sunak but there’s one group firmly behind the National Health Service: The public.

The largest strikes in the history of the country’s NHS kicked off in England, Wales and Northern Ireland in December, with a second day of strikes taking place on Tuesday. The walkout of up to 100,000 nursing staff in protest against real-term pay cuts and concerns about patient safety will massively disrupt ordinary health care provision.

Despite the impact on the British public at a time of year when the health system is under extraordinary pressure, Britons are still firmly behind striking nurses. Two-thirds of the public support the strike action, a poll Tuesday from YouGov indicated. Levels of support were similar for strikes by ambulance staff, who are set to embark on action on Wednesday.

“Health workers rarely go on strike but when they do it should be seen as a red flag, designating a health system in crisis,” said Martin McKee, president of the British Medical Association and professor of European public health at the London School of Hygiene and Tropical Medicine. “The NHS has gone from one of the best performing [health services] in industrialized countries to one that is failing on many measures in just over a decade.”

It's not just underinvestment in staff and equipment, but also failings in housing and welfare that are contributing to this, said McKee.

Appearing before a committee of senior MPs on Tuesday, Sunak insisted he was sticking to the recommendations on pay set out by its pay review body.

He acknowledged inflation levels were “difficult for everybody,” but insisted the best way to help everyone else in the country was to “get a grip and reduce inflation as quickly as possible.”

“If we get it wrong, and we're still dealing with high inflation in a year's time, that's not going to help anybody," he said. "I don't want to see that I want to see things get back to normal, and that's why having an independent process is an important part of making those decisions and getting them correct, and that's why we've accepted those recommendations.”

The strikes reveal the level of pressure on nurses, and the health system more broadly, over the past several years. Research from health think tank the King’s Fund shows there has been a 25 percent increase in the number of nurses leaving their role between June 2021 and June 2022 compared to the previous year. While the strikes will likely further increase already eye-watering long waiting lists, the Royal College of Nursing argues that the current staffing crisis is putting patients' lives at risk.

Health Secretary Steve Barclay has refused to reopen pay negotiations on the demand for a pay rise of five percent above inflation, with the RCN General Secretary Pat Cullen saying Tuesday that it is “unprecedented” for the union's members to strike.

“If this government isn’t prepared to do the right thing, we’ll have no choice but to continue in January and that will be deeply regrettable,” Cullen warned.

Analysis of the current state of Britain's health system paints a dire picture. "Restricted funding for more than a decade has led to a deterioration in performance right across the NHS, with waiting times standards for hospital care and for treatment at A&E routinely not met for more than 5 years," said Sally Warren, director of policy at the King's Fund.

"For staff working in the NHS, the latest annual NHS staff survey highlighted a sobering picture of over-stretched teams working in an under-staffed health service."

Nurses were paid less in real terms in 2021/22 than in 2010/11, said Nuffield Trust researcher, Lucina Rolewicz. "So it is unsurprising that many nurses are beginning to struggle with the cost of living," she said. But nurses are also leaving for other reasons, including work-life balance, Rolewicz added.

While the threat of the COVID-19 pandemic may have receded, the impact is still felt in the health system. During the health crisis, many staff experienced intense workload and burnout, the Health Foundation’s Stephen Rocks said Tuesday. Combined with the cost-of-living crisis, this is likely to “have a further adverse impact on staff pay, morale and retention,” he said.

As for the NHS, it's focused on mitigating any threat to patients during the industrial action.

In advice sent out Tuesday, the NHS said that patients should "use services wisely" during strikes. The advice includes asking the public to "play their part" by looking after themselves and their loved ones, including by "drinking responsibly."