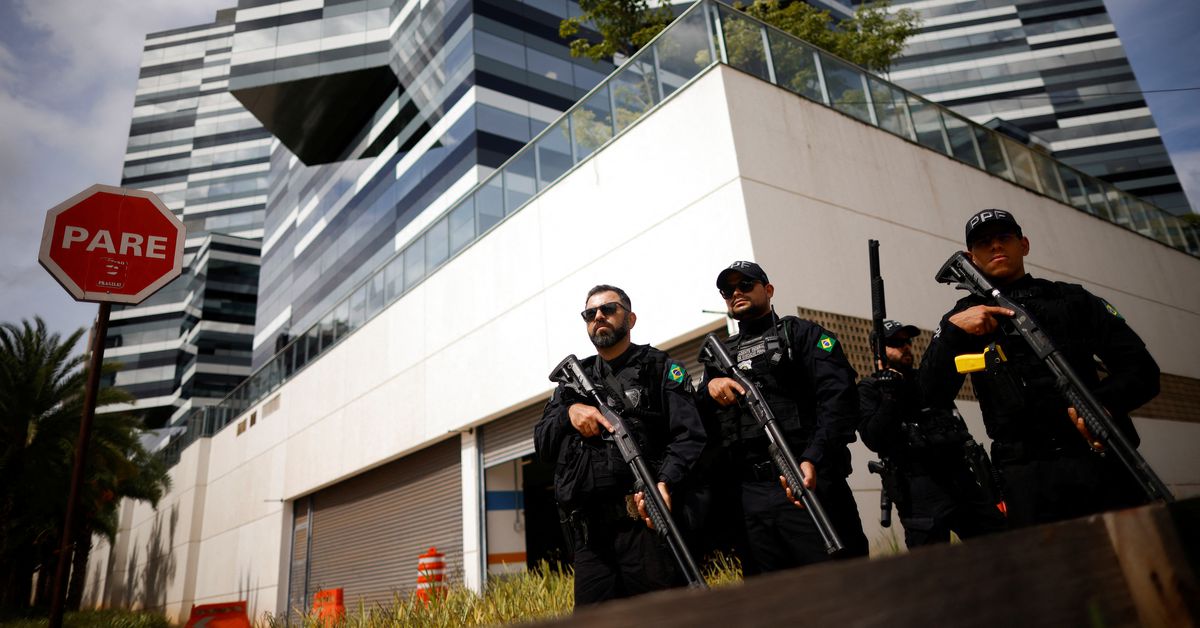 Brazilian police said they had arrested at least four people and carried out nationwide raids on Thursday in investigations into an alleged coup attempt during riots by supporters of defeated far-right President Jair Bolsonaro.
Brazilian authorities, led by the Supreme Court, have been cracking down on a small but committed minority of Bolsonaro supporters who refuse to acknowledge leftist President-elect Luiz Inacio Lula da Silva's election victory and are calling for a military coup.

Bolsonaro, who has yet to concede defeat, has pushed baseless claims that Brazil's electoral system lacks credibility, which some of his hardcore base believe.

Thursday's operation came just days before Lula's inauguration on Sunday, and less than a week after police in Brasilia said they had foiled a bomb plot masterminded by alleged Bolsonaro supporters.

The raids stemmed from a riot on Dec. 12, the day Lula's victory was certified, when election-deniers camped outside army headquarters in Brasilia attacked the federal police HQ and set cars and buses alight after the arrest of a pro-Bolsonaro indigenous leader.

The federal police said on Thursday they were serving 32 search and arrest warrants in eight states under Supreme Court orders.

The alleged crimes were "qualified damage, arson, criminal association, violent abolition of the rule of law and coup d'état, whose maximum combined penalties amount to 34 years in prison," they said in a statement.

Cleo Mazzotti, who heads the federal police's organized crime division, said four people had been arrested by mid-morning, with more detentions expected as police searched for seven other suspects.

Two arrest warrants were served in the northwestern state of Rondonia, one in Rio de Janeiro and one in Brasilia, Mazzotti said in a press conference.

Speaking at the announcement of his new ministers, Lula urged people not to worry about post-election "noise."

"Those who lost the elections should stay quiet, and the winners have the right to throw a big, popular party," he said.

Incoming Justice Minister Flavio Dino cheered the operation, saying it was aimed at upholding the rule of law by "protecting life and property."

"Political reasons do not legitimize arson, attacking the federal police headquarters, depredations, bombs. Freedom of expression does not apply to terrorism," Dino wrote on Twitter.

On Wednesday, Reuters reported that the Brasilia riots followed days of mounting tensions in the election-deniers' camp following the Dec. 6 arrest of Milton Baldin, a Bolsonarista who had urged registered gun-owners to come to the capital to protest Lula's electoral certification.

Less than two weeks after the riots, police found a bomb in the capital. George Washington Sousa, a Bolsonaro supporter with links to the army encampment, confessed to making the device to provoke the military into an intervention.

Mazzotti said almost all the people targeted in Thursday's raids had visited the pro-Bolsonaro camp.

With growing fears about security risks around Lula's Jan. 1 inauguration in the capital, the Supreme Court on Wednesday banned registered gun-owners from carrying firearms in the federal district until after he takes office.